IRSYAD AL-FATWA SERIES 209: THE RULING OF PRAYING AT A MOSQUE LOCATED FURTHER AWAY IN FEAR OF BEING AN IMAM AT A SURAU NEAR TO HIS PLACE OF RESIDENCE 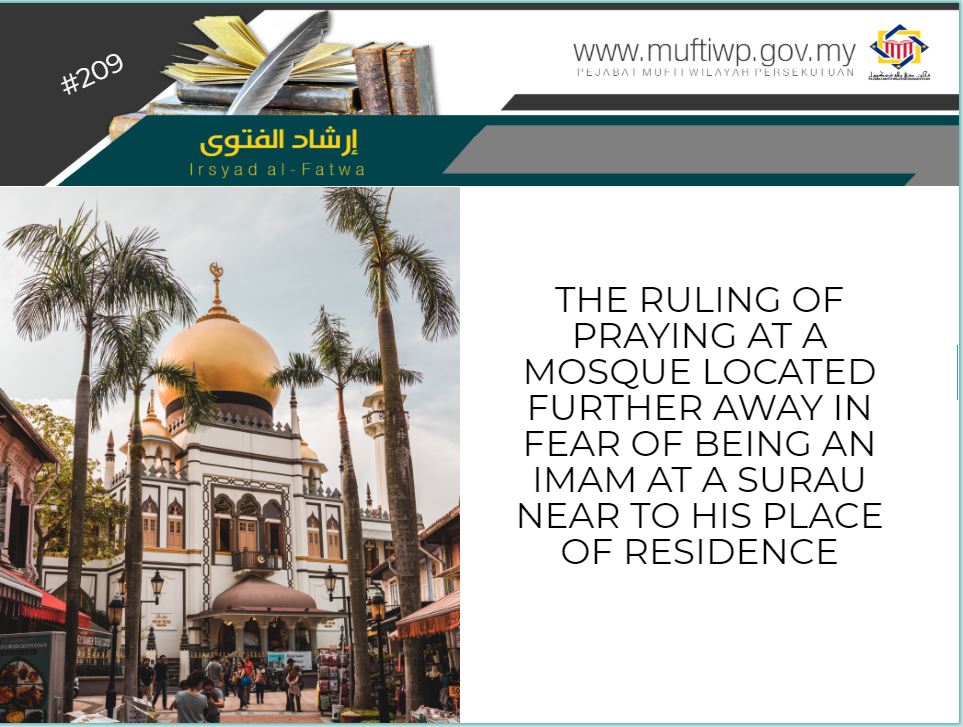 Assalamualaikum, I want to know the ruling for praying in a big mosque and not praying in a village surau because he is not confident and nervous if asked to be the imam at the surau.

The Ruling of Congregational Prayer

This is in accordance to a statement of Allah SWT in the Quran:

“And when you are among them and lead them in prayer, let a group of them stand [in prayer] with you,”

This verse is revealed explaining the manners of praying in fear when they are in war. Thus, the commandment to perform the congregational prayer when one is in a safe environment is of utmost importance. Refer Fiqh al-Manhaji (1/177)

The Wisdom of Congregational Prayer as an Eminence in Islam

Indeed, the strength of Islam is built on the strength of the pillars of brotherhood and helping each other in upholding the goodness and preventing misdeeds and sins. This cannot be completed, unless the role of mosques as a place for Muslims to assemble and perform the five obligatory prayer is fully utilized.

Furthermore, in worldly affairs, humans are divided and envious of one another. Hence, with the existence of Muslims gathering and performing the obligatory prayers together, it will help to mend their hearts and rebuild the bond between them from being teared apart from division and envy. A true mu’min is unlike the munafiq (hypocrite); a true mu’min establish their congregational prayer and worship and always make an effort to attend the mosques. Refer Fiqh al-Manhaji (1/178)

The Importance of Praying in Mosques and Surau

“The mosques of Allah are only to be maintained by those who believe in Allah and the Last Day and establish prayer and give zakah and do not fear except Allah, for it is expected that those will be of the [rightly] guided.”

Imam al-Qurthubi said: “Allah SWT’s statement is an evidence that the people that maintained the mosque and establish their prayer in it, are those that truly believe in Allah SWT and that they are rightly guided, for Allah SWT relates belief and the maintenance of mosques….some scholars of the Salaf said: “If you see a believer that always establish his prayer in mosque, then think only of good things towards him.” Refer Tafsir al-Qurtubi (8/90)

Imam al-Maraghi said: “A person that combines an important obligation with other obligations in Islam, are among those who are guided towards everything that pleases Allah SWT. Which means, the maintenance of mosque in terms of hissi or ma’nawi is in accordance with the sunnah of Allah SWT in the actions of humans and the effect of their actions. Thus, they deserve to be rewarded for their deeds in heaven.” Refer Tafsir al-Maraghi (2715)

It is clear from the above statements that someone that establish their prayers and maintains the houses of Allah, whether in mosques, or surau, then they are among the guided people and they will be rewarded with heaven.

One of the situations is when choosing to pray in a mosque located nearer to one’s place of residence. The reason for this is it may result in the congregation decreasing and the congregation at a certain place would eventually be gone if all of its community choose to pray at other bigger mosques.

A similar situation is where if the mosque is located further away from one’s place of residence has an imam that commits bid’ah, a fasiq or someone whose prayer’s obligations are imperfect (for example his recitation of the al-Fatihah is bad or others). Thus, in these situations, praying in the mosque nearer to one’s place of residence is prioritized. Refer al-Mu`tamad fi al-Fiqh al-Syafie by Syeikh Muhammad al-Zuhaili (1/407)

Regarding the situation faced by the questioner, it is necessary for every Muslim to make sure that all the obligations of prayer is performed perfectly and with certainty and confidence. Hence, it should not be a problem for every Muslim to have another Muslim to follow him and be his ma’mum. If not, then he should learn until he is sure of the perfection of his prayer (worship). Furthermore, in the situation where the congregation is confident having you as their imam, it is not right for a believer to run away from his responsibilities of giving service to his community, especially at his place of residence just because he is unconfident of taking up the role of an imam.

Hence, we state that the ruling for praying at a mosque located nearer to one’s place of residence is prioritized, while maintaining that praying in a bigger mosque but is located further is permissible.