IRSYAD AL-FATWA SERIES 218: THE RULING OF EATING AT THE CEMETERY 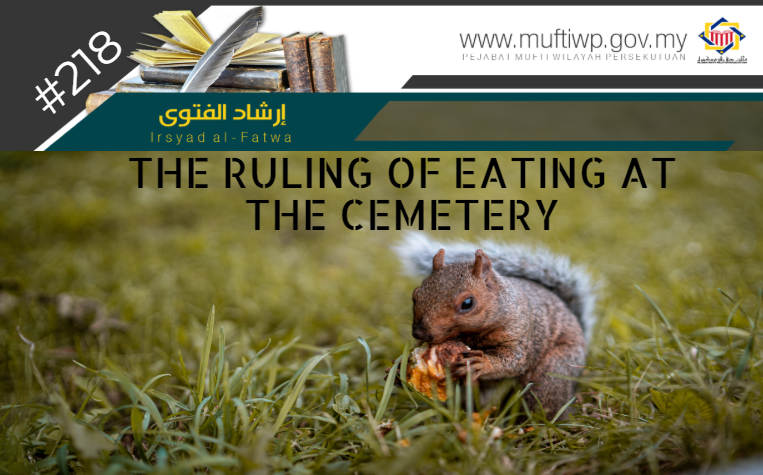 Alhamdulillah, praise and thanks to Allah SWT for the countless blessings He has blessed us all with. Blessings and salutations to the prophet Muhammad PBUH, his family, companions and all those that follow his teachings.

In answering this question, we divide it into several sections:

First: Definition for a Graveyard

Second: Sunnah to Visit the Graves

There are a lot of evidences that encourage us to visit the graves. From Abu Hurairah RA, he said the Prophet PBUH said:

“Visit the graves, for they will remind you of the Hereafter.”

“I forbade you to visit graves, but you may now visit them, for in visiting them there is a reminder (of death).”

In a long narration from Anas bin Malik RA, the Prophet PBUH said:

“Visiting the grave can soften the hearts, bring tears to the eyes and a reminder of the hereafter. Thus, visit graves. And do not speak of bad words.”

Third: The Issue of Eating in Cemeteries

Back to the question asked, we break this issue into three parts:

According to the deeds of the salafus soleh, graveyards or cemeteries are not a place to eat. Due to this, when we study the manners of visiting graves, there are no mention of a suggestion of eating but it is full of manners and prayers when someone is visiting graves.

We refer to Malay tradition, especially in rural areas, where they would build wakaf or a shed, not on the grave or cemetery itself but on a part of the grave land, that has not been used, as a place to rest and take shade from the sun while waiting for other family members or friends that are coming to visit the graves. In this issue, we hold the opinion that it is permissible on the condition that they must observe the manners of being in the vicinity of a cemetery.

There is a prohibition to slaughter animals on graves. From Anas RA, the Prophet PBUH said:

“There is no slaughtering (at the grave) in Islam.”

Syeikh Abd al-Razzaq said: "The meaning of ‘aqra ( عَقْرَ ) is slaughtering of animals at the grave.

Thus, when eating in a shed or wakaf in the vicinity of a cemetery, one should always observe one’s manners. Avoid slaughtering animal in the vicinity and keep the cemetery clean, for the cleanliness of the cemetery symbolizes the concern and care of a community of their graveyard.

Our opinion is that this statement is inaccurate. This is due to the fact that the living lives in different realm than the dead, for the dead live in barzakh which is different than in this world, without denying that there is the punishment and rewards in barzakh.

We hold the opinion of in the issue of visiting graves, we must ensure to mind our manners and follow the guidelines that has been set according to syara’. May we be given a good understanding in our religion of Islam.