IRSYAD AL-FATWA SERIES 222: THE RULING OF WEARING SHOES AS KHUF 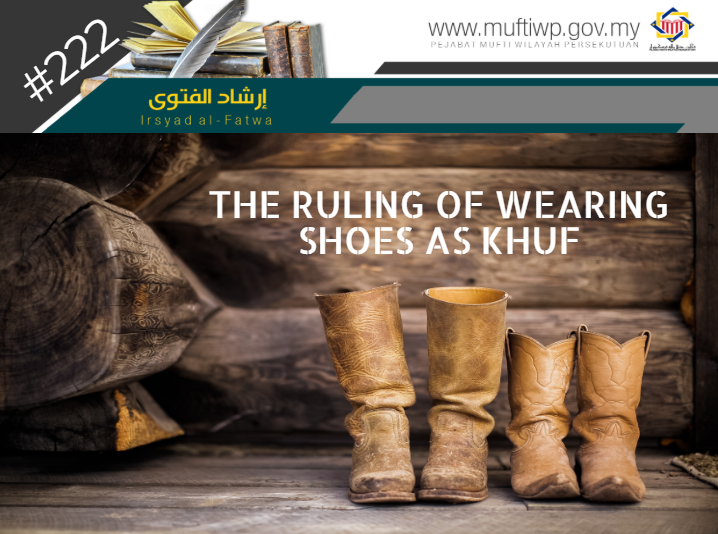 If my intention is of wearing khuf when I’m wearing shoes, can I remove my shoes for prayer? Especially when I’m uncertain whether my shoes are clean and can be brought in prayer.

First, we state the definition of khuf and shoes:

The difference for khuf is that it fully covers the whole feet past the ankles, and it’s made from leather. Thus, the shape and characteristics of the shoes should be determined first. If it is similar to khuf, or more than that, for example, military boots, then it falls under the same ruling as khuf. This is the opinion of some scholars, such as Sayyid Sabiq in Fiqh al-Sunnah.

Regarding the question that was asked, we assumed that the shoes meant satisfies the conditions of khuf. If not, it is not applicable for the shoes to follow the ruling for khuf. As for the ruling for khuf, we will explain below, referring to al-Fiqh al-Manhaji (1/241-245):

The Ruling of Wiping Khuf

The proof for wiping khuf with water is from the action of the Prophet PBUH, through a hadith from Jarir bin Abdullah al-Bajli RA, he said:

“I saw that the Messenger of Allah PBUH urinated, then performed ablution and then wiped over his shoes.”

The Conditions of Wiping Both Khuf

It is permissible to wipe both khuf under five conditions:

First: Both khuf are worn after the completion of ablution. This is in accordance with a hadith by al-Mughirah bin Syu’bah RA, he said:

“Once I was in the company of the Prophet PBUH, he then performed ablution and I dashed to take off his socks. He said, “Leave them for I had put them on after performing ablution”. So, he wiped over them.”

Second: Both khuf must cover the feet that are obligatory to be washed during ablution. Since it is not considered as khuf if they are not so.

Third: Both must be water-proof except at the stitches.

Fourth: Both are impervious and durable to be worn for one day and one night for a muqim (resident) and three days and three days for musafir (traveller).

The Duration for Wiping the Khuf

The duration to wipe khuf for a resident is one day and one night, while for a traveller is three days and three nights. This is in accordance with narration by Syuraih bin Hani’ RA, he said:

“I came to 'A'isha to ask her about wiping over the socks. She said: You better ask ('Ali) son of Abu Talib for he used to travel with Allah's Messenger PBUH. We asked him and he said: The Messenger of Allah PBUH stipulated (the upper limit) of three days and three nights for a traveller and one day and one night for the resident.”

Whoever wears the khuf when he is residing, then he travels, he can wipe the khuf for only one day and one night. The same applies to anyone who travels, then resides, he has to end his duration for wiping the khuf to be as a resident’s duration.

This is due to the fact that the original rule of all people is residing and wiping the khuf is facilitation (rukhsah). Thus, in choosing a safe way of determining the duration to wipe the khuf, it is stated that one should go back to the original ruling.

The Start for the Duration of Wiping the Khuf

The Method of Wiping the Khuf

It is obligatory to wipe a portion of the upper part of the khuf, even if the portion is small, and it is not enough to only wipe under the khuf.

Matters that Could Invalidate the Wiping of the Khuf

Three things that could invalidate the wiping of the khuf:

“'The Messenger of Allah PBUH used to tell us, when we were travelling, to wipe over our Khuffs and not take them off for three nights in the event of defecating, urinating or sleeping; only in the case of Janabah."

Janabah is matters that obligate the obligatory bath.

[1] This is applicable only at the beginning of wearing the khuf. That is, after wearing the khuf, if there is najis, it does not invalidate the ruling of wearing khuf, only the parts with najis needed to be washed. However, if someone is unsure, then go back to the original ruling, that there is not najis. It is forgiven if khuf is worn on roads that have najis for it is difficult to take care of. Refer to Minhaj al-Talibin (pg. 52). The same applies to land or soil, since its purity is difficult to be determined or if the najis is unknown, then he has to go back to the original ruling.