IRSYAD AL-FATWA SERIES 223: IF SOMEONE COMMITTED FORNICATION WITH A NON-MUSLIM WOMAN; WHAT SHOULD HE DO? 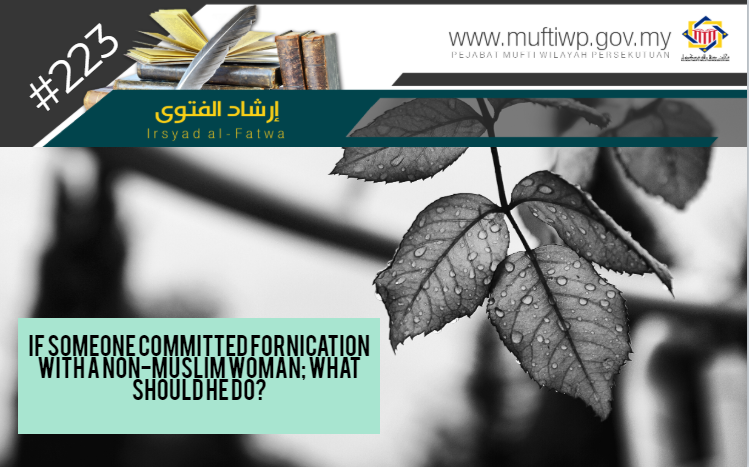 Salam SS Mufti. I have a question from a young man that committed fornication with a non-Muslim woman in a CSR programme. The question is:

Now, the woman is willing to embrace Islam, but she needs a guarantee from the man’s mother that he would not leave her. Question: What should he do after his mom has agreed to accept the woman after she converted to Islam?

For us, this issue will need to be discussed thoroughly for it involves; conversion to Islam with conditions, marriage (akad) with conditions, and responsibility towards the unborn child. Thus, we will answer this question as follows:

“And who is better in speech than one who invites to Allah and does righteousness and says, "Indeed, I am of the Muslims."

“He who guides (others) to an act of goodness, will have a reward similar to that of its doer.”

And there is no greater reward and gift for someone, when we become the reason for the conversion to Islam, for it saves a person from disbelief. Thus, the decision made by the man to marry the woman to invite her to Islam is a great deed.

The Ruling of Converting to Islam with Conditions

Imam al-Syaukani includes a few hadith that are referred by scholars regarding this issue:

“Wahb said: I asked Jabir about the condition of Thaqif when they took the oath of allegiance. He said: They stipulated to the Prophet PBUH that there would be no sadaqah (i.e. zakat) on them nor Jihad (striving in the way of Allah). He then heard the Prophet PBUH say: Later on, they will give sadaqah (zakat) and will strive in the way of Allah when they embrace Islam.

Al-Syaukani put these hadiths under Chapter: The Validity of Someone’s Conversion to Islam with Fasid (Flawed) Conditions. He said:

“These hadiths are evidences that ruled it permissible to accept the conversion to Islam by a disbeliever with conditions, even if the conditions are fasid, and his Islam is valid even when he feel forced.”

Abu Daud and al-Munzir both keep silent [1] after narrating the text of the hadith from the above stated narration of Wahab. Its sanad is la ba’sa bihi (can be used as an argument). (Regarding the hadith from Thaqif) Abu Daud also stated a hadith from al-Hasan al-Basri from Uthman Abi al-Aas:

“On you will be no zakat or jihad, but there will be no goodness in the religion of someone that does not ruku’.”

Al-Mundziri said: “Does not ruku’ means someone that does not pray.”

Imam al-Khattabi said: “There is a similarity between the act of the Prophet PBUH in accepting the conditions by the two men (men from hadith by the narration of Nasr and Thaqif) from the (obligation) of jihad and sadaqah (zakat), for it is not an obligation towards them immediately. This is due to the fact that zakat is only obligatory when the haul is complete, while jihad is obligatory when there is a requirement (an order from government, or enemy attack and others). However, the prayer is ratibah (continuous obligation), thus, not praying cannot be made as a condition for embracing Islam.”

Al-Syaukani said: “When considering the hadith from Nasr bin Asim as stated above, the Prophet PBUH also accepted the Islam of the man that stipulated a condition of praying only two times, or just one prayer as stated in another narration. A question arises when reviewing back on the hadith that states ‘There is no goodness in the religion of someone who does not ruku’. Thus, literally, it means that there is no goodness in the Islam of someone who sets a condition that he does not pray. Maybe it can be said that, the denial of the goodness (khairiyyah), does not mean it is impermissible to accept the Islam of someone that sets a condition for him to not pray, and the absence of qobul (acceptance) from the Prophet PBUH from Thaqif does not reject acceptance as a whole.” Refer Nail al-Autar (7/234-235)

The conclusion from the discussion made by Imam al-Syaukani is, the Islam of someone who stipulates flawed and inapplicable conditions is valid. In the context of the question above, if the woman embraces Islam with the condition that the man never leave her, then her conversion to Islam is valid, Furthermore, the woman asked for the guarantee of the man’s mother not from the man himself.

The Ruling of Marriage (Akad) with Conditions

"Stipulating conditions in marriage, if it is not related to the purpose of marriage (ie sexual intercourse) then the ruling is lagha (which means it does not give any effect when it is not fulfilled) as what has been stated in the previous chapter of sale and purchase ... Whereas if the conditions are related to muqtadha (rights and responsibilities) of marriage, then it is divided into two situations.

First; the condition that does not eliminate the original purpose of marriage, then the condition is fasid or flawed, whether it is in favor of the wife, such as it is conditioned that her husband cannot marry any other woman while being married to her (polygamy) or he cannot take a slave woman, or he must take her along for travels, or she can go out whenever she pleases, or he has to divorce her co-wife. Or it is not in favor of the wife, such as, she is not given any time if her husband is polygamous, or given the same residence of other co-wives, or is not provided maintenance (nafaqah).

Based on the majority of the scholars’ opinion, the ruling for fasid conditions is not to the extent of ruining marriage. While in the wajah or other qaul as exerted by al-Hannati; the marriage is invalid. As for al-saddaq (or dowry) then the dowry becomes fasid and it is obligatory for her husband to fulfil mahr al-mithli, whether it is more or less or less than the dowry of al-musamma (the original). This is the opinion of the mazhab (al-Syafie). "

Sheikh Muhammad al-Zuhaili said: "Mahar became fasid because the dowry of his wife is bound with the conditions she stipulated. So, when the condition is broken then the mahar is broken, because it denies the wife’s dowry (offered) along with her conditions, if the man has had intercourse with his wife, then it is obligatory for the husband to pay for mahar mithli. " Refer: al-Mu`tamad (4/106)

Hence, regarding to the question above, if there is a guarantee of the husband to never leave her, which means to not divorce her is stated during the aqad, then the condition become fasid, but the marriage is valid.

First and foremost, we advise the Muslim man to repent from his sin of committing fornication and vow to perform as many good deeds that he can to cover the great sin that he has committed. This can be done through istighfar and pure repentance of never repeating the sin again. Moreover, he should do islah or a great good deed that rivals the sin that he has committed. He can do islah by marrying the woman and taking responsibility and care for the child that will be born the best that he can. We hold the opinion that it is permissible for him to marry the woman even while she is pregnant, which is in line with an opinion in mazhab Syafie. This is to ensure the sustenance for food, a home, healthcare and education and other important necessities for a child that really need the love and care from a father. Illegitimate child cannot be named as the child of the biological father when born later than 6 months after the date of marriage. We have discussed in-depth about this issue in Bayan Linnas Series 106: The Issue of naming “Bin/Binti Abdullah” to Illegitimate Child by the Court of Appeals.

However, this man will indirectly be a step father to the child, and he will care and educate the child using the principles of ihsan. He should emulate the personality of the Prophet PBUH that marries Umm Salamah and provided a home for her and her children. When Umm Salamah marries the Prophet PBUH, she has a young daughter that is still breastfed, named Zainab. The Prophet PBUH would let Zainab finishes feeding with her mother before Umm Salamah attended to him. Zainab grew into a great sahabiah with wide knowledge and a famous narrator of hadith. Her brother, Umar bin Abi Salamah are also educated and cared for by the Prophet PBUH. The Prophet PBUH once advices him while he was a young boy to eat using his right hand and take the dishes nearer to him first. Umar said: “After that, I always eat with my right hand.”. Stepchildren of the Prophet PBUH are so proud of their step father. Hindun bin Abu Halah, the daughter of Khadijah said: “I’m the most honoured human! My father is the Prophet PBUH, my mother is Khadijah, my sister is Fatimah and my brother is al-Qasim!” Refer al-Samtu al-Thamin (pg. 27) by Muhib al-Tabari.

And if the child’s mother marries the father, then Islam forgives all her sins as if she is just born into this world. Allah SWT states in the Quran:

“Allah has pardoned what is past;”

“Say to those who have disbelieved [that] if they cease, what has previously occurred will be forgiven for them. But if they return [to hostility] - then the precedent of the former [rebellious] peoples has already taken place.”

"If a person embraces Islam sincerely, then Allah shall forgive all his past sins, and after that starts the settlement of accounts, the reward of his good deeds will be ten times to seven hundred times for each good deed and one evil deed will be recorded as it is unless Allah forgives it."

In a narration by al-Nasaie (4998), Allah SWT will record - which means Allah SWT will include - the good deeds of someone before she embraces Islam.

For the man, the wife should be well-respected. Her needs of religion, life, mind, dignity and wealth should be fulfilled based on Islam to create a happy Muslim family in Allah SWT’s care and guidance. May Allah SWT bless this couple and give blessings and ease in their lives.

[1] It indicates that the hadith is good and can be used as an argument or evidence. Staying silent after stating the matan without commenting on the hadith is one of the methodologies of hadith scholars including Abu Daud.