IRSYAD AL-FATWA SERIES 225: THE RULING OF PRAYING INSIDE A CAR 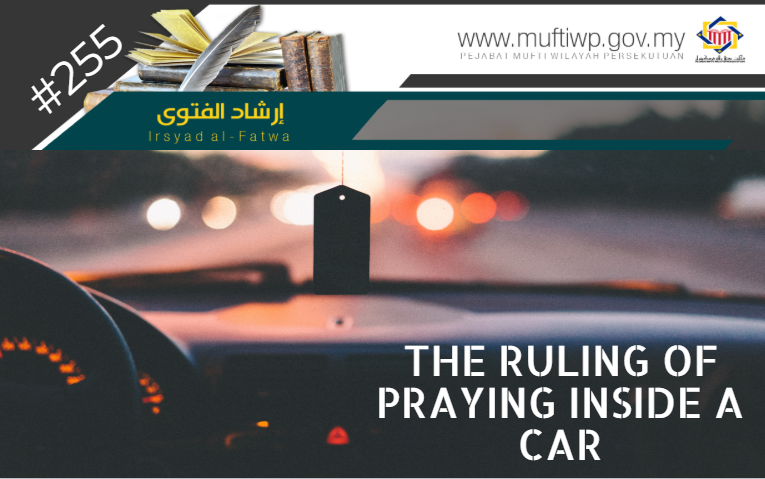 Assalamualaikum SS Datuk Mufti. I want to ask your opinion regarding a celebrity that prayed inside his vehicle. Is this act permissible, when there are a lot of other places we can stop to perform our prayer?

To answer this issue, there are a few important basics that are needed to be understood first.

The Ruling of Praying in A Car

The discussion regarding this issue, more or less has a basis, for there are a few narrations that mention this. One of them is a hadith from ‘Amir bin Rabi’ah, he said:

“I saw the Prophet PBUH on his Mount praying Nawafil by nodding his head, whatever direction he faced, but Allah's Messenger PBUH never did the same in offering the compulsory prayers.”

Hence, is it permissible to pray in a car if someone is travelling? Also, what type of prayer is referred to by the hadith? Is it especially for the obligatory prayer or just for sunnah prayer?

Imam al-Hafiz Ibn Hajr al-Asqalani Rahimahullah when commenting on this hadith put it under the chapter of “Chapter: When He (the Prophet PBUH) Went Down (from His Mount) to Perform the Obligatory Prayer”.

Ibn Hajar wrote the opinion of Ibn Batthal regarding this issue, stating: “Scholars and ijma’ has agreed on the condition of (going down from animal mount) for this issue, and it is prohibited for someone to perform his obligatory prayer on animal mount without any reasons or facilitation (that is permitted by Syarak)”.

He further states: “The word praying in this hadith refers to sunnah prayer. This is based on other hadiths that support it.” See Fath al-Bari, Ibn Hajar (2/667).

We divide the issue of praying in vehicles into two types of vehicles used nowadays:

First: Praying on vehicles such as trains, aeroplanes and the like.

In this issue, it is permissible for someone to pray in it, whether it is obligatory prayer or sunnah prayer. This is after taking into consideration of the usual duration for journeys involving this type of transportation. Furthermore, there is no way for him to come down from this type of transportation unless he has arrived at the destination intended. Thus, the concept is clearly different than praying on animal mounts.

The in-depth discussion regarding the rulings of praying in an aeroplane can be accessed through the link https://bit.ly/2r3kfAe

Regarding praying on animal mounts such as a horse and a camel, it is very similar to a car that is used nowadays. This is due to the fact that someone that is in a car can easily stops and gets out of his car to pray. Furthermore, we live in a conducive environment, where in Malaysia, there are plenty of places provided, such as the surau in Rest and Recreation (R&R), petrol station and many more places especially for prayer, and someone can easily stop to pray comfortably.

Should We be Facing the Qibla When Performing the Sunnah Prayer in a Car?

For this problem, we would like to state the opinions of previous scholars as well as contemporary scholars regarding this issue, they are as follows:

Hence, the requirement to face the qibla varies according to the situation of the person performing the prayer.

Al-Imam al-Qadhi Abu Syuja’ Rahimahullah said: “It is permitted for someone to leave the facing of the qiba in two situations; which is when he is in extreme fear or when performing sunnah prayer during travel on animal mount.” See Matan al-Ghayah wal-Taqrib, Abu Syuja’ (pg. 62).

Hence, after considering the environment and situation of the roads in our country, it is permissible for someone to perform sunnah prayer such as dhuha prayer or others, not facing the qibla.

Manners of Performing Prayer in A Car

For someone to perform prayer in a car, it is a bit different than when performing prayer normally. This is due to the fact that praying in a car involves signals by movements of the head, as explained in a few hadiths. There is a narration from Ibn Umar R.Anhuma, where he said:

“The Prophet PBUH used to offer (Nawafil) prayers on his Rahila (mount) facing its direction by signals, but not the compulsory prayer. He also used to pray witr on his (mount) Rahila.”

Imam al-Khatib al-Syarbini also used this hadith as an evidence in stating his opinion: “That it is enough for someone (that prayed on animal mount) to just use signals (for his ruku’ and sujud) and his sujud must be lower than his ruku’.”.

We conclude this issue as the following:

First: The ruling for performing sunnah prayer in a car is permissible, while for obligatory prayer, it is prohibited with the exception of darurat (desperate) situations.

Second: If someone has great influence or followers, he must avoid any acts that could confuse the community, unless he includes references or arguments from scholars or body of authorities.

Third: The prayer’s and conditions and prerequisites that need to be fulfilled are to be taken into consideration when praying. Thus, it is a priority and most preferred for someone to not pray in his car, if the environment is conducive, and it is easy for him to pray at a comfortable place compared to praying in a car.

Lastly, may Allah SWT give us the right understanding in practising His religion. Ameen.