IRSYAD AL-FATWA SERIES 230: THE AGE OF PUBERTY ACCORDING TO THE 4 MAZHAB AND THE AGE LIMIT FOR A CHILD TO BE CONSIDERED AN ORPHAN 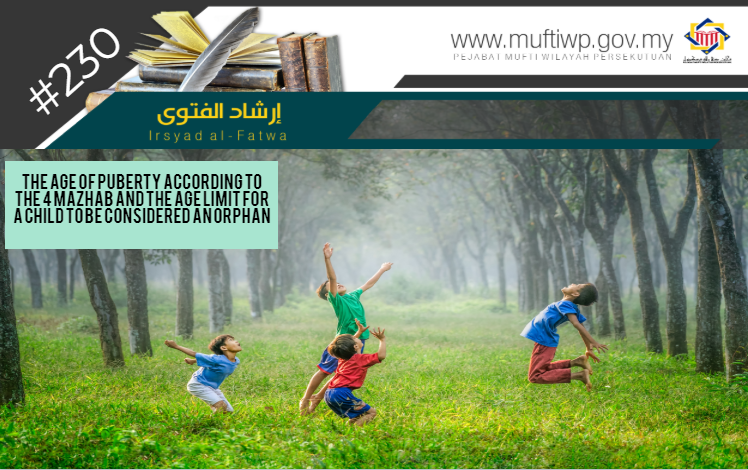 What is the age limit for someone to still be considered an orphan and is it obligatory to pay for his nafkah? Is it according to his age of puberty or not?

Imam al-Syafie said that the Prophet PBUH has rejected 17 companions, for they are 14 years old and is not considered as someone who has reached puberty. After that, the Prophet PBUH met companions of the age 15 years old, then he allowed them. Among them are Zaid bin Thabit, Rafi’ bin Khadij and Ibn Umar.

“When a child matures to the age of 15 years old, then what he did will be written and he will be responsible for his deeds and hudud is applicable to him.” [This narration is written by Imam Ibn Hajar al-Asqalani in al-Talkhis al-Habir on 106/3 and Imam al-Baihaqi states that the hadith is dhaif]

Al-Malikiyyah states that the age of puberty is at 18 years old, it is also said it is until he dreams (and ejaculates), according to a hadith of the Prophet PBUH:

"The pen has been lifted from three; for the sleeping person until he awakens, for the boy until he becomes a young man and for the mentally insane until he regains sanity."

While for girls, they reached puberty when their menstruation starts. The Prophet PBUH said:

[Sunan Ahmad and ashab al-Sunan except al-Nasaie and Ibnu Khuzaimah and al-Hakim from Aisyah R.Anha. This hadith has a hassan sanad as stated by Syeikh Syuaib al-Arna’outh]

Or when they are pregnant or when they experienced growth of pubic hair.

Al-Hattab presented 5 opinions in the mazhab, some said 18 years, 17 years and some commentators of the book al-Risalah added the age of 16 years old, 19 years old and Ibn Wahab said it is 15 years old according to a narration by Ibn Umar.

However, Abu Hanifah stated the age of puberty is when a boy reached the age of 18 years old and a girl when she is 17 years old. This is in accordance with a statement by Allah SWT:

“And do not approach the property of an orphan, except in the way that is best, until he reaches maturity.”

Ibn Abbas RA said, the age of 18 years old as the age of puberty is the opinion of a small number of scholars. However, it is accepted that it is the maximum age of puberty for boys while girls reached puberty earlier than boys. Hence, we reduce a year from it (17 years old). (See al-Mausu’ah al-Kuwaitiyyah, 15-17/2)

Coming back to the question regarding the age limit for a child to be considered an orphan, here we include an act from The Islamic Family Law (Federal Territory) Act 1984. It is as follows:

as it thinks reasonable, to enable the child to pursue further or higher education or training.”

The Opinion of Mufti Wilayah Persekutuan

We inclined towards the opinion in mazhab al-Hanafi and al-Maliki that set the age of puberty is at the age of 18 years old, especially in the issue of providing for the orphans. This is due to the fact that generally in Malaysia, a child under the age of 18 years old is not capable to live on his own yet (independent) or provide for himself. Furthermore, we agree that the court should extend the duration for maintenance provisions (financially) to ensure the education and work career for the orphans at a certain age limit such as 21 years old or other age that the court deemed appropriate.