IRSYAD AL-FATWA 103: THE RULING OF PERFORMING SOLAT TAHIYYAT AL-MASJID IN SURAU DIRI JUMAAT (A SURAU WHERE JUMU’AH PRAYERS ARE PERFORMED) 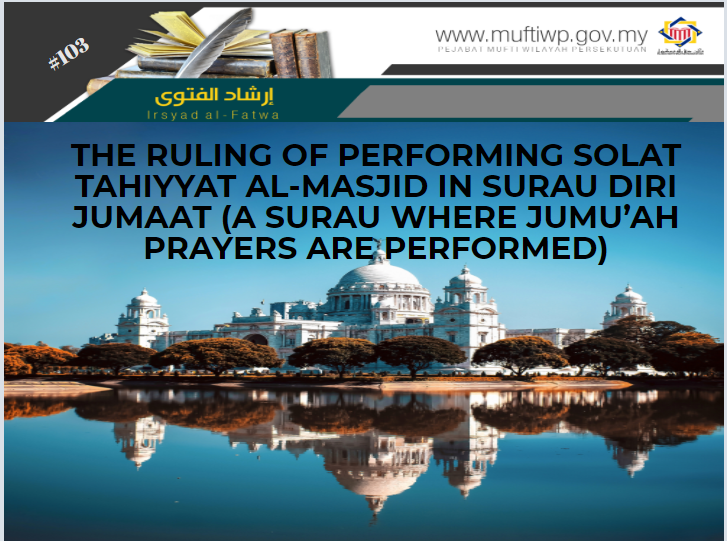 What is the ruling of performing solat tahiyyat al-masjid in surau diri jumaat (a surau where jumu’ah prayers are performed)?

It is generally known that solat tahiyyat al-masjid is performed when one enters a masjid (mosque) as recorded in the hadith of the Prophet PBUH where he said:

"If anyone of you enters a Mosque, he should not sit until he has offered a two rak`aat prayer."

To have a better understanding on the issue, heeby we state first what are the definitions of masjid, masjid al-jami’, musolla and surau before we go deeper on the discussion of the ruling of solat tahiyyat al-masjid in a surau where jumua’h prayers are performed.

Masjid: It is a place built to perform prayers inside it with the intention of getting Allah’s blessings. It is specified by the custom (‘urf) as a place where congregational five daily prayers are performed -not included musolla - and a place to perform specific prayers such as ‘Eid prayers, istisqa’ and many more. Rulings that are imposed on a masjid are not applicable to musolla and madrasah as well as ribat. (Refer I’lam al-Saajid bi Ahkam al-Masaajid oleh al-Imam Al-Zarkasyi)

Masjid al-Jami’: In the books of Fiqh, it is defined as masjid as well, but distinguished by the fact that it is where Jumu’ah prayers are performed, unlike masjid.

Musolla: Literally, it means a place to peform prayers and du’a. However, contextually, it refers to a wide stranded land where people gathered there to perform prayers of specific reasons like the istisqa’ (prayer of the intention of asking for rain), funeral prayer and the ‘Eid prayers. This can be extracted from the hadith of the Prophet PBUH:

'Abdullah b. Zaid al-Ansari reported that the Messenger of Allah (ﷺ) went out to the place of prayer in order to offer prayer for rainfall. And when he intended to make supplication he faced Qibla and turned round his mantle.

The same is stated in the hadith when the Prophet PBUH was informed on the death of al-Najasyi; the king of Habsyah empire, he went to a stranded land to perform funeral prayer for the deceased. Abu Hurairah RA said:

“Allah's Messenger (ﷺ) informed (the people) about the death of An-Najashi on the very day he died. He went towards the Musalla (praying place) and the people stood behind him in rows. He said four Takbirs (i.e. offered the Funeral prayer).”

“The Prophet (ﷺ) used to proceed to the Musalla on the days of Id-ul-Fitr and Id-ul-Adha; the first thing to begin with was the prayer and after that he would stand in front of the people and the people would keep sitting in their rows. Then he would preach to them, advise them and give them orders, (i.e. Khutba). And after that if he wished to send an army for an expedition, he would do so; or if he wanted to give and order, he would do so, and then depart.”

It is understood here that the Prophet PBUH did not perform every prayers in masjid. In fact, for some purposes, he went out to perform prayers in musolla. Whereas, musolla is not a specific place to perform daily congregational prayers.

Is Musolla Considered as Masjid?

In mazhab al-Syafie, musolla is not considered as masjid. Al-Imam al-Ghazali when asked on musolla where the ‘Eid prayers are performed, he said:

“There is no (rules imposed on the musolla) as what being imposed on the masjid such as the ruling of i’tikaf (staying in the masjid for some period of time to do ibadah), the prohibition of those in janaba (ritually impure) to enter masjid and many more. Masjid is specified in performing congregational five daily prayers and not meant for none other than this. Meanwhile, places of peforming ‘Eid prayers are meant for social engagement, a resting place for those in a journey, a place to have a ride on the animals and a playful place for the children. The scholars never prohibit any of these to be done in such place (musolla). If ever they consider it as a masjid, surely they will protect it from those, which concerns the holiness of five daily prayers. ‘Eid prayers are one of the sunna and will never be repeated more than twice a year. As for those, they are performed at the musolla with the intention of social communion and (surely) to follow the path of the Prophet PBUH.” Refer I’lam al-Saajid bi Ahkam al-Masajid (p.389]

“A musolla where ‘Eid prayers and other sunna prayers are performed, are not considered as masjid, it is not prohibited for those in janaba (ritually impure) and women in menses in the opinion of the mazhab. This is also the stand of the jumhur (majority of the scholars).”

In other mazhab like the Hanbali, it is said that musolla where ‘Eid prayers are perfomed is considered as masjid. Meanwhile, a musolla where the prayers for the dead (solat al-janazah) are performed is not considered as one. Refer al-Syarh al-Mumti’ ‘ala Zaad al-Mustaqni’ (5/154)

Meanwhile, the Hanafi said that musolla (a place to peform ‘Eid prayers and the prayers for the dead) is not considered as masjid, but still is in some aspects.

Tarjih: After some observations, the tendency falls on the opinion of mazhab al-Syafie’ due to some reasons:

The word ‘surau’ is not an Arabic word. In the Kamus Dewan 4th edition, surau means “a building which is smaller than masjid, a place where people perfom ibadah (worship), such as prayers and learning or sermon and lectures regarding Islam. The other words for surau are langgar and madrasah.”

In the Malay tradition, surau is viewed as a place to perform prayers and it can be a tiny place in the office, shopping complex or masjids where Jumu’ah prayers are not performed there.

If there is a surau in a housing area, it is understood as a place where congregational five daily prayers are peformed, but not the Jumu’ah prayers. Some even have organised committee in charge of the wellfare of the surau.

Some surau are even promoted as masjid and are given permission to do Jumu’ah prayers there. Normally, they are called in a Malay language as ‘surau diri Jumaat’ (surau where Jumu’ah prayers are performed).

In Malaysia, there is a term for suraus that are granted permission by the authorities to perform Jumu’ah prayers there. It is called ‘surau diri Jumaat’ as a sign that there are Jumu’ah prayers performed there.

If we look on the discussions before, we can see that masjids are given the term by syara’ and the term ‘surau’ is not originated from the Arabic language, thus there is no discussion on this by the early scholars. However, by observing the usage and functions of surau in Malaysia, we can say that it fits perfectly in the description of masjid.

Some suraus in Malaysia have the recitation of azan, congregational five daily prayers are performed there and even have their own organised committees in term of management and a proper bulding. They are also registered with the office of the religious affairs to operate. Such surau existed in housing areas that has Muslims as majority of the populations, in which a developer will take this as a complementary element when developing a place. As for this, in our opinion such surau has the same concept and functions of a masjid.

Tarjih: Some opinions stated that it is not considered as tahiyyat al-masjid when a person performs two rakaat prayers in a surau diri masjid, claiming that surau is not a masjid. However, we tend to see it otherwise as this opinion has no solid evidence that supports it. Hereby, we state our judgements on this.

According the custom (‘urf), we can see that everything applicable in a masjid is applicable in a surau as well. The differences here are that surau is not used to perform Jumu’ah prayers and is smaller when compared to a masjid. In a legal maxim, الْعِبْرَةُ بِالْقَصْدِ لا بِالْأَلْفَاظِ, which means “attention is given to intention and not words”, we can say that surau is also a place where one perform five congregational daily prayers as well. As for this, surau has the same status with masjid although it is not named as one.

Through understanding of Arabic language and the Fiqh’s terminologies, we see that both of them are a parallel and have the same meaning.

In the times of the Prophet PBUH, there are mosques all around Medina. However, Jumu’ah prayers are only performed in the Masjid al-Nabawi. So, it is permissible to perform the two rakaah sunnah prayer of tahiyyat al-masjid in a surau. The reason is, although Jumu’ah payers are not performed there, they are still considered as mosques in the times of the Prophet PBUH. Majority of the Malay Muslims here thought that masjid is a place where Jumu’ah prayers are performed, while surau is the opposite.

This is also an effort to widen the opportunity of performing worship, not only in Masjid al-Jami’, but also includes surau diri Jumaat as mosques that are located in most of the housing areas, according to the definition of past scholars. It is one of the al-targhib (a motivation for the people in doing good deeds). Wallahua’lam.

The Resolutions of the Meeting of Fatwa Council of Federal Territory

The 96th Meeting of Fatwa Council of Federal Territory which was held on 24th February 2016 agreed that it is permissible to perform sunnah tahiyyat al-masjid prayer in surau diri Jumaat based on the evidences mentioned above.

May Allah give us a better understanding in this religion for us to practice it in accordance with the Shari’a. Ameen.