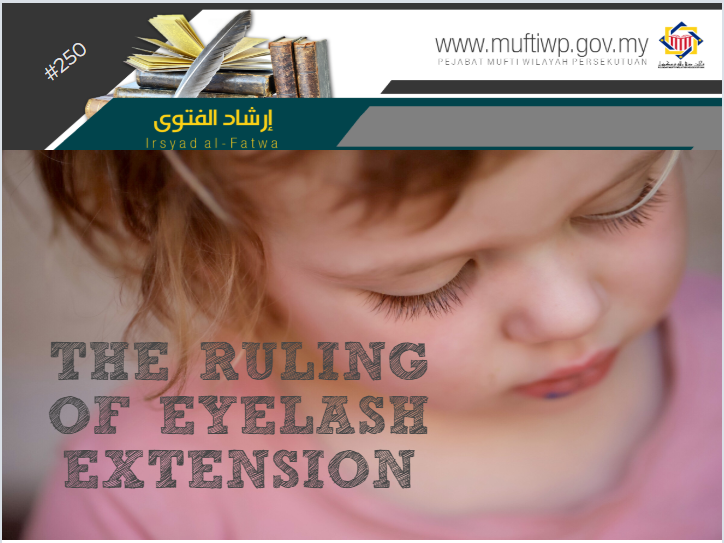 What is the ruling of wearing fake eyelashes that have become a trend among Muslim women?

Eyelash extensions is a method used to enhance the length, curliness, fullness, and thickness of natural eyelashes. [1] The extensions may be made from several materials including from animal’s fur, synthetic, or horse hair. This method can be divided into two; either using false temporary eyelashes that can be removed and semi-permanent eyelashes. The main method of applying the extensions is by using an adhesive glue to individually stick the extensions to the eyelash line. This is to prevent the eyelashes from adhering to each other. [2]

The addition of fake eyelashes for women are usually for beautification purposes, it is done to make the eyelashes appear curlier, fuller and thicker. This phenomenon is spreading rapidly especially with the involvement of local celebrities. Thus, to answer this question a few basics should be taken into account.

Islam Does Not Prohibit Beauty

Basically, Islam does not prohibit Muslims to beautify themselves. Furthermore, Islam even encourages Muslims to always appear neat and beautiful, humbly and appropriately. A hadith from the Prophet PBUH states:

“Allah is Beautiful, He loves beauty.”

Imam al-Munawi said: “He loves beauty” means people that beautify themselves from among you…” Refer Faidh al-Qodir (2/224)

Islam also encourages cleanliness especially at places where all Muslims assemble together such as during Friday prayer or during the two Eid celebrations.

“It’s not wrong for whoever among you that has wealth to provide two clothing especially for Friday and two clothing for normal work clothing.”

This encouragement is not just for men but includes women as well. Allah SWT states:

“And do not expose their adornment except that which [necessarily] appears thereof,”

Nevertheless, the act of beautification should be done in moderation. Islam forbids its people from being outrageous, prideful and deceptive.

The Basis of Hair Extension Prohibition in Islam

One of the acts that are considered excessive in Islam is the act of wearing hair extensions which are known as ‘al-wasl’ in Arabic. Women that extend their hairs are called al-wasilah.

The prohibition comes from a hadith from Asma’ binti Abi Bakr R.Anhuma, a woman came to complain to the Prophet PBUH saying: “O Messenger of Allah, my daughter has just married. She contracted smallpox and experienced hair loss. Can I extend her hair (with hair extensions)?” Then the Prophet PBUH said:

The same is also said in another narration by Aisyah R.Anha, an Ansar girl was just married. She was sick and experienced hair loss. Her family want to attach her hair (with hair extensions). They came to the Prophet PBUH and asked him. The Prophet PBUH said:

Imam al-Nawawi said, the hadith firmly states the prohibition of hair extensions and cursed to the woman that attach her hair or wear a permanently attached hair. This is a strong opinion. (See Syarh Sahih Muslim al-Nawawi, 14/103)

“Hair extension is prohibited, for no acts are cursed except those which are prohibited.”

He then quotes Imam al-Nawawi’s commentaries on this:

“This is a select and external ruling. Our colleagues explained:

Both situations presented have the same ruling, whether the person is married or not, man or woman. On another hand, if the hair extension is clean (pure) and not from human’s hair if the woman is not married or does not have any authority on her, then, it is still prohibited. However, if she is married or has authority over her, then there are three opinions:

The third opinion is the strongest opinion of Islamic scholars.

“Regarding the issue of attaching hair;

Both opinions are from the opinion from the mazhab that states it is prohibited to see parts of disconnected human body.

It is permissible to wear a wig if she has permission from her husband in cases where the woman has cancer and this result in hair loss. However, she cannot wear it when there are other people for it is a part of adornment. The permissibility of wearing a wig is only for wigs neither made from human hair nor from an animal’s fur. [3]

It is not permitted to wear fake nails, fake eyelashes (manmade) and coloured contact lenses for it can cause harm. It can be considered as a form of deception and changing of Allah SWT’s creation. [4]

As for artificial eyelashes and ingredients that coated the original lashes, some of the medical experts say that they are made of nickel salts or of various types of artificial rubber. Both can cause eyelid inflammation and damage the eyelashes (causing them to fall off). [5]

In the issue of wearing fake eyelashes, we hold the opinion that considers a few factors:

“And do not throw [yourselves] with your [own] hands into destruction,”

The Prophet said: "Whoever leaves an area the size of a hair on his body and does not cleanse it from sexual impurity, such and such will be done to him in the Fire." 'Ali said: "Because of that I am hostile towards my hair,"

However, for eyelashes that are implanted within the eye line itself, they do not prevent validation of wudhu’.

According to the conclusions above, we ask all those that wear fake eyelashes that has been prohibited to leave the act and repent to Allah SWT and do the following:

Hopefully, this answer will give us a clear understanding about halal and haram issues, referring to the Quranic and hadith evidences as well as the Islamic scholars' opinions, so that all our actions can coincide with the Syariah law. We advise all parties, especially women to adorn and beautify themselves moderately, and doing it not to show off, or change Allah’s creation as the Jahiliyyah did before us. Wallahua'lam.