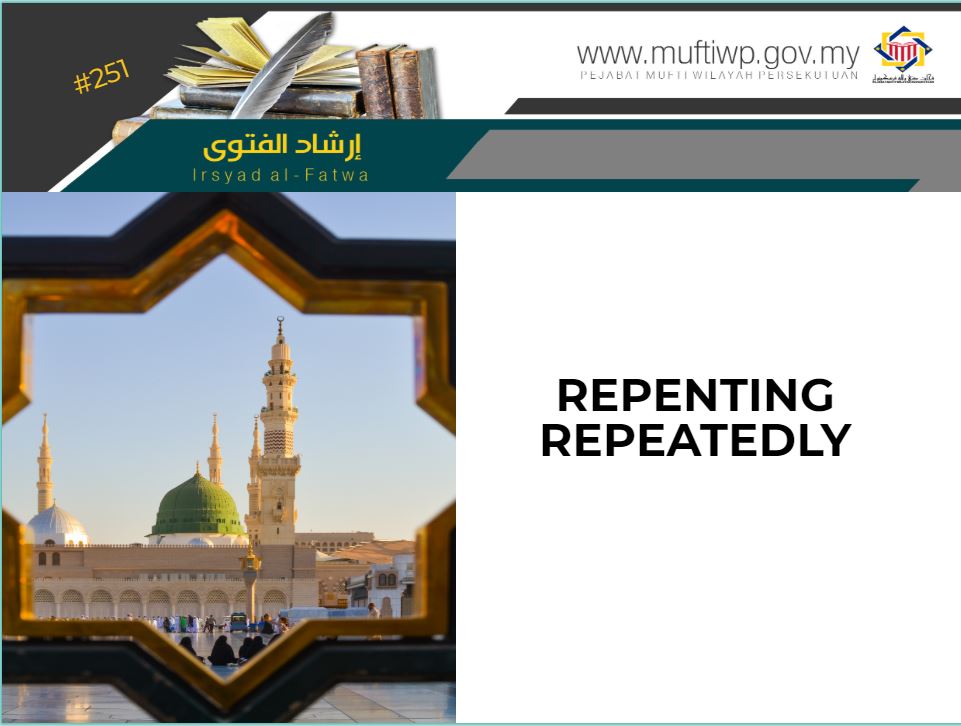 Someone repented for his sins, then despite his better judgement, his nafs overcome himself and he commits the sin again. Is his repentance accepted?

The Concept of Repenting in Islam

According to Kamus Dewan, repentance is regret for the sins committed (or other evil deeds) and determined to never commit the sin again, he feels regret for committing the sin and is determined to never repeat the sin again. It can also be defined as returning to God (leaving the sin and everything that has been prohibited and obeying the commandments) (See 4th Edition Kamus Dewan.) [1]

“And turn to Allah in repentance, all of you, O believers, that you might succeed.”

Ibnu Kathir said: Do everything that has been commanded upon you with beautiful and noble character. Leave the norm of the Jahiliyyah that practise despicable manners, for success can only be achieved through the obedience towards Allah SWT and His Prophet PBUH and leaving what has been prohibited by Allah SWT and His Messenger PBUH. (See Tafsir al-Quran al-‘Azim, 10/225)

“And [saying], "Seek forgiveness of your Lord and repent to Him, [and] He will let you enjoy a good provision for a specified term and give every doer of favour his favour. “

Ibnu Kathir said: It means, and I command you to seek forgiveness from Allah SWT for the sins that you have committed and repent to Him from those sins, and you would continuously do it. (See Tafsir al-Quran al-‘Azim, 7/411)

Imam al-Nawawi mentioned in his book Riyadh al-Salihin: “Islamic scholars said, the ruling for repenting from sins is obligatory. If the evil deed (sin) is between Allah SWT and His slave and has no connection with other people, there are three conditions for repentance:

If one of the conditions is not fulfilled, then his repentance is invalid.

However, if the sin involves the rights of other people then, the conditions for repenting is four, the three stated above and an addition of one more condition:

The Ruling of Repenting Repeatedly

In a hadith from Abu Hurairah RA, he heard the Prophet PBUH said:

However, the repentance must be from the heart and with real feelings of guilt and regret. Not just with the recitation of istighfar, but the heart still wants to commit the sin.

This has been stated by al-Imam al-Qurtubi as written by al-Hafiz Ibn Hajar in Fath al-Bari, he said: “The hadith (above) shows how great the benefit of istighfar is and the greatness of Allah’s gifts, the extent of His grace, tenderness and mercy of Allah SWT. But the real istighfar is the istighfar whose heart has the same intentions as what the tongue utters to abstain and is accompanied by a sense of regret. This is what repentance means.”

"It means he who repeats sin and then repents, every time he is trapped in sin, he will immediately return to repentance. It does not mean that anyone whose tongue asks for forgiveness of Allah SWT, while his heart continually wants to commit the sin." (See Fath al-Bari, 21/89)

Hence, when repenting, it must be done with both feelings and heart. And when he falls back to sin, asks for forgiveness from Allah SWT for the sin committed. Don’t give up on istighfar.

“And those who, when they commit an immorality or wrong themselves [by transgression], remember Allah and seek forgiveness for their sins - and who can forgive sins except Allah? - and [who] do not persist in what they have done while they know.”

Ibnu Kathir said, regarding the statement of Allah SWT, (وَهُمْ يَعْلَمُونَ) “while they know”, Mujahid and ‘Abdullah bin ‘Ubaid bun ‘Umair said: “They know that whoever repents to Allah SWT, surely Allah would accept his repentance.”. This verse is in accordance to Allah SWT statement:

“Do they not know that it is Allah who accepts repentance from His servants,”

And another statement of Allah SWT:

“And whoever does a wrong or wrongs himself but then seeks forgiveness of Allah will find Allah Forgiving and Merciful.”

As a conclusion, repentance and istighfar that is done repeatedly is accepted as long as there is no intentional repeating of the sin and the repentance fulfils the conditions of repentance.

“O, you who have believed, repent to Allah with sincere repentance. Perhaps your Lord will remove from you your misdeeds and admit you into gardens beneath which rivers flow [on]”

Ibn Kathir said: Real repentance is with resolve and determination, that can eliminate the evil deeds, unite and gather people who repent, and refrains oneself from misconduct and sins.

Due to this, Islamic scholars say: Real repentance is to have resolve and determination to avoid and leave sins in the future and regret the past sins that he has committed, and then to have determination to never repeat the sin again in the future. Then, if the sin is related to human rights, let him return (right) what he has taken. (See Tafsir al-Quran al-‘Azim, 14/60-61)

Finally, may Allah SWT forgive our sins and bestow upon us the understanding, to practice His commandments.

For more information on this issue, we have answered it in Irsyad Al-Fatwa Series 49: The Meaning of Repentance and Its Conditions [2] and Al-Kafi 651: Taubah Prayer [3].