IRSYAD AL-FATWA SERIES 257: THE RULING OF CERTAIN PRACTISES TO ENSURE SALES BY SELLER 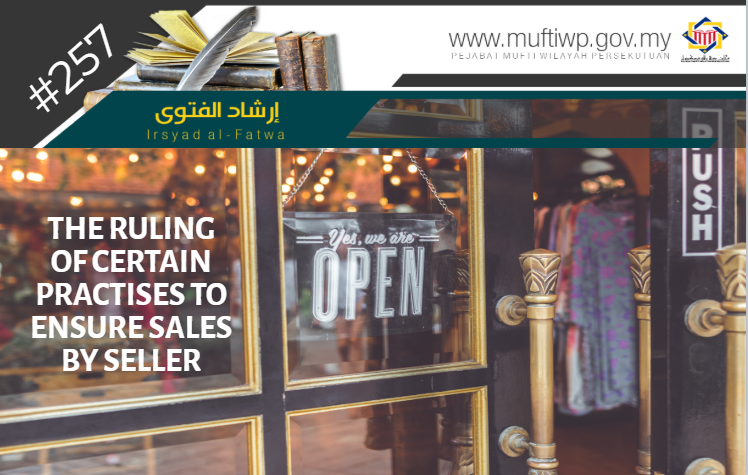 What is the Islamic ruling for some seller that has certain practises such as putting physical things, for example, rice, shillings, salt and others to ensure sale for their business?

Business and sustenance in Islam

Business is a noble work in Islam in an effort for seeking sustenance. Islam encouraged all Muslims to seek sustenance through business. Allah SWT states in the Quran:

“And when the prayer has been concluded, disperse within the land and seek from the bounty of Allah, and remember Allah often that you may succeed.”

Ibnu Kathir said: Allah prohibits buying and selling after the adhan and commands them to assemble in prayer, then Allah permits them to disperse on earth to seek Allah’s bounty. See: Tafsir al-Quran al-‘Azim (8/183)

Imam al-Baghawi said: That is, after the completion of the prayer, then, disperse on earth to do business and settle your affairs. See: Tafsir al-Baghawi (8/123)

“And others travelling throughout the land seeking [something] of the bounty of Allah and others fighting for the cause of Allah,”

Ibnu Kathir said: (Among others, they are) the ones that are travelling to seek Allah’s bounty through trade. While others are busy with something they consider more important which is fighting for Allah’s sake. See: Tafsir al-Quran al-‘Azim (8/331)

In a hadith from al-Miqdam, the Prophet PBUH said:

"Nobody has ever eaten a better meal than that which one has earned by working with one's own hands. The Prophet of Allah, David used to eat from the earnings of his manual labor."

The Prophet Muhammad PBUH himself was directly involved in the business. Even his great companions such as Uthman bin Affan and Abdul Rahman bin Auf were involved in business.

However, the business run must follow the guidelines and ethics that have been set in Islam. Every effort made must not transgress the limits that Islam has set. Among them is, a seller is asked to avoid anything that could lead to shirk towards Allah SWT in an effort of seeking sustenance and profit in business.

The Ruling for Placing Certain Objects to Ensure Sale

In answering the question that arises, placing physical objects to attract customers and ensure sales is in discord with Islamic teachings. This is due to the fact that someone’s dependence would move to the objects rather than towards Allah SWT. It’s a superstitious practice that could lead to shirk and association of Allah with other objects.

In Islam, this discussion is often linked to al-tamimah (talismans). Placing or putting physical objects in business premise with the hope of attracting customers and ensuring sales, falls under the usage of talismans. In a hadith from Ibn Mas’ud R.Anhuma, the prophet PBUH said:

Imam al-Munawi said: The usage of talismans is considered shirk because it means someone believes that it can bring influence (ta’thir) and this leads to shirk towards Allah SWT.

Al-Tibi said: Shirk in this hadith means when someone believes that it (the charm, talismans and tiwalah) has the power to give effect (in influencing/change something) and this contradicts the reliance and dependence towards Allah SWT. See: Faidh al-Qadir (6/121)

In a hadith from ‘Uqbah bin ‘Amir, he heard the Prophet PBUH said:

“Whoever relies on something, surely he will be left to it (the thing he relied on).”

Ibn Al-Athir as written by Syeikh Mulla Ali Al-Qari said: Whoever relies on something for himself as protector, talisman, and the like and secondly, believes that all of that can benefit or prevent harm for him, surely, he will be left under its care. Which means he will be left with the things he used as a protector. See: Mirqat al-Mafatih (7/2882)

Syeikh ‘Atiyyah Saqar in his fatwa mentioned: “Whoever believes in superstition such as kokka wood (as talisman that protects) can avert shaytan and Iblis, increase sustenance and cure illnesses, it is a form of shirk for all that is Allah’s one and only right.”

Indeed, to gain multi-fold of profits is through hard work and effort not by placing certain objects. However, with hard work and real effort with taqwa and reliance towards Allah SWT, it will bring great profits in return. Allah SWT states:

“And whoever fears Allah - He will make for him a way out. And will provide for him from where he does not expect. And whoever relies upon Allah - then He is sufficient for him.”

Ibnu Kathir said: It means, whoever has taqwa for Allah and obey all His commandments and avoid all His prohibitions, Allah will make a way out for him and give him unexpected sustenance. That is, from ways that he couldn’t even imagine. See: Tafsir al-Quran al-‘Azim (14/31)

The Prophet PBUH once said:

As a conclusion, putting physical things such as rice, shillings, salt and others to ensure sales or to attract customers is considered superstitious beliefs and could lead to shirk towards Allah SWT.

Avoid everything that is superstitious and shirk in our effort to seek blessed sustenance. On another hand, always recite the verses of the Quran and pray to Allah to bless us with sustenance and manifold profits in our business.

We would like to recommend istighfar as many times as possible and ask for Allah’s forgiveness as stated in the Quran:

“And said, 'Ask forgiveness of your Lord. Indeed, He is ever a Perpetual Forgiver. He will send [rain from] the sky upon you in [continuing] showers. And give you increase in wealth and children and provide for you gardens and provide for you rivers.”

May we always be guided in practising the true Islamic teachings and kept away from going astray and I pray to Allah for halal and blessed sustenance from Him for all of us. Amin.