IRSYAD AL-FATWA SERIES 260: THE RULING OF BATHING IN PUBLIC POOLS 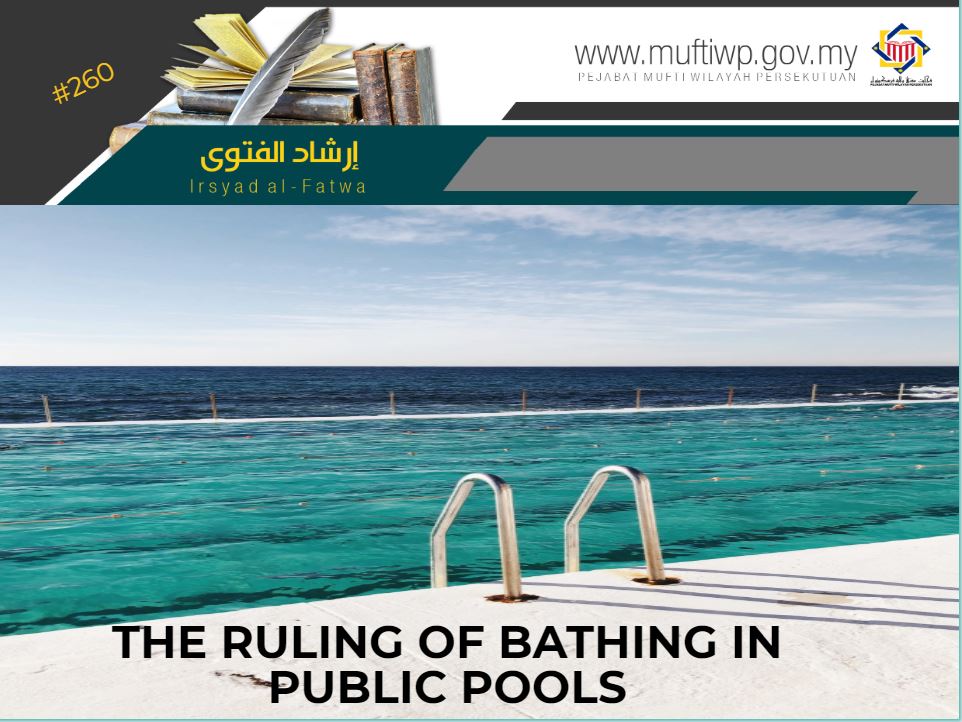 Is it permissible to bath with family members in public swimming pools?

The Obligation of Covering Aurah

In Islam Muslims are commanded to cover their aurah, may it be when he is alone or in public to protect his dignity and decency and that it will be a part of his self-character. See al-Halal wa al-Haram fi al-Islam (pg.142)

In a hadith from Bahz bin Hakim, his grandfather said:

Manners When Taking a Bath

Islam has manners set for Muslims when taking a bath, and one of them is to hide from others so that no one could see his aurah.

This is mentioned in several of the Prophet PBUH’s hadiths, one of them is from Ya’la bin Umayyah RA, the Prophet PBUH saw a man performing ghusl in an open place, so he ascended to the Minbar and praised and glorified Allah SWT, then he said:

“Allah, the Mighty and Sublime, is forbearing, modest and concealing, and He loves modesty and concealment. When any one of you performs Ghusl, let him conceal himself.”

There is a prohibition in Islam from entering public bathing place where the aurah can be seen with the exception of a covering by a cloth. Someone is also prohibited to enter any public bathing place unless he cannot be seen by anyone or out of everyone else’s view. Narrated from Jabir RA, the Prophet PBUH said:

In another hadith from Abu al-Mulaih al-Hazali, some women from Himms or Syria came to see Aisyah R.Anha, she said:

“Perhaps you belong to the place where women enter hot baths (for washing)?” They said: “Yes.”. She said: “I heard the Messenger of Allah PBUH say: “If a woman puts off her clothes in a place other than her house, she has teared the veil between her and Allah, the Exalted.”

Another similar narration from Ummu al-Darda’ R.Anha, she said, I went out from a bath house and saw the Prophet PBUH. He asked, “Where are you from?” “From a bath house” I answered. He then said:

“By God that my life is in His hands, there’s no woman that puts off her clothes in a place other than her mother’s house, she has teared every veil between her and Allah SWT.”

Allah SWT has sent down clothes so that they cover their aurah and it is the clothes of taqwa. When they (women) has no taqwa surely, they would expose their aurah, thus tearing the veil between them and Allah SWT. (See ‘Aun al-Ma’bud, 9/33)

The evidences above state that the Prophet PBUH asked us to be careful when going to public baths especially for woman.

In answering the issue, we hold the opinion of it is better to find suitable places to avoid the exposure of aurah from happening.

As an example, the effort made by Tabung Haji Hotel to separate man and woman swimming pools are great to avoid mingling of man and woman. In addition, clothes worn in these type of places (swimwear) are hard to control.

The same goes to other efforts such as building women swimming pools in enclosed area with high walls that the swimming appear as if they are in a building.

Recently, Alhamdulillah we find that there are efforts made by Muslim swimwear designers to create and design swimwear that are in accordance with Islamic law. We view this as a really good effort and hopes that this industry could be expanded further.

May Allah give us understanding in His religion and obeying His commandments. Amin.