IRSYAD FATWA SERIES 270 : THE RULING FOR NOT SHAVING FOR A LONG TIME 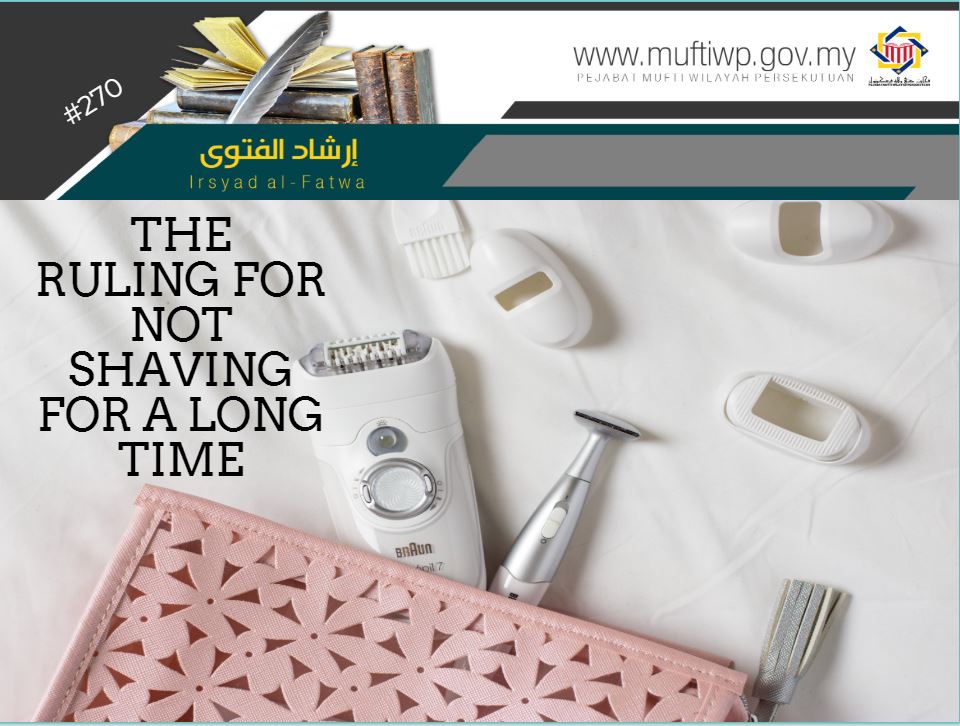 Assalamualaikum, is it permissible for someone to not shave their pubic area or armpits for a long time?

Regarding the issue of removing body hairs, Islamic scholars has categorized it into three categories as follows:

First: Body Hairs Which Were Commanded to Be Shaved

In Al-Quran or hadith evidences, there are several commands of shaving a few types of human body hairs. This is as stated by the Prophet PBUH:

Imam al-Nafrawi are among the fuqaha from the Maliki school that said hairs in the surrounding area of the rectum also falls under the category of pubic hairs. (Refer Al-Fawakih Al-Dawani, Al-Nafrawi, 2/306).

According to this narration, there are three types of body hairs that are obligatory to be shaved, they are; pubic hair, armpit hair and moustache. And we are commanded to either cut, shave or pluck them.

Second: Body Hairs Which Were Prohibited from Being Shaved

There are body hairs that are prohibited by Islamic ruling from being shaved. One of them is shaving or cutting of the beard for man. This prohibition is stated in a narration by Abdullah Ibn Umar RA, that said the Prophet PBUH said:

“Shave your moustaches and let the beards be.”

Another narration that is also narrated by Ibn Umar RA, the Prophet PBUH said:

Do the opposite of what the pagans do. Keep the beards and cut the moustaches short.

Another type of body hair that is prohibited from being shaved is the eyebrows. The reference for this ruling is taken from a narration from the Prophet PBUH that states:

Imam Ibnu Hajar views the issue of woman removing moustaches and beards by saying: It is bound to her husband’s permission and must be done with his knowledge. (Refer Fath Al-Bari, Ibn Hajar, 10/390)

Imam al-Nawawi also said: Our mazhab permits the removal of beards, moustaches and العَنْفَقَةُ (‘anfaqah) which are small hairs that grow in between the lower lips and the chin area (for woman). The prohibition in the narration is for eyebrows and hairs that grow on the face. (Refer Al-Minhaj Syarah Sahih Muslim, Al-Nawawi, 14/285)

Imam Ibnu Hajar al-Asqalani when commenting on this narration said: Al-Nammash means to remove hairs on the face using a shaver. It is said that it is specific for the eyebrows with the intention of heightening or levelling the eyebrows.

Ibn Hajar also wrote the words of Imam Abu Daud in his book Al-Sunan: النامصة is a woman that trims her eyebrows. He also wrote the words of Imam Al-Thabari as follows: It is prohibited for woman to change anything from Allah’s creation by adding or reducing anything with the intention to increase or decrease her beauty. She is prohibited from doing it for her husband or for anyone else, even if she has a unibrow, she is prohibited to shave or remove the hairs connecting the brows in the middle. (Refer Fath Al-Bari, Ibn Hajar Al-Asqalani, 10/390).

Third: Hairs Which Were Not Mentioned in The Quran Or Hadith

This refers to hairs that were not mentioned in the Quran or hadith, where there are no commands to keep them or remove them. Thus, in this case it goes back to the original ruling of, it is permitted. This is in accordance with a narration from Salman Al-Farisi RA, the Prophet PBUH said:

Al Imam Al-Sindi said when commenting on the hadith: This hadith coincides with another narration:

Overall, this narration states that: the original ruling for everything is that, it is permitted. (Refer Hasyiah al-Sindi ‘ala Sunan Ibn Majah, 1/326).

A few examples of hairs not mentioned in the Quran or Hadith are, hand and legs hair, chest hair, hair on the thighs, nose and calves. There are no commands to keep them or prohibition in removing them. Thus, one can choose either to keep or to remove them.

Regarding body hairs that are obligatory to be shaved or cut, there is a narration that states the duration of how long it can be kept before it needs to be shaved. Narrated by Anas bin Malik RA, he said:

“A time limit has been prescribed for us for clipping the moustache, cutting the nails, plucking hair under the armpits, shaving the pubes, that it should not be neglected far more than forty nights.”

The above hadith specifies a certain duration that the hairs can be kept before it is obligatory to be cut, which is, it cannot be kept for more than forty days.

Imam Al-Nawawi in his commentaries of the hadith said: “The stated time to shave (pubic hair), as has been decided is according to necessity and when it is long. When it has grown it needs to be shaved. The same goes to shaving moustaches, clipping the nails and plucking the armpits. The narration above means that it cannot be kept for more than forty days. Not that the hairs need to be shaved every forty days.” (Refer Syarah Al-Nawawi ‘ala Muslim, 3/491)

To close the discussion, we would like to state that the ruling for keeping body hairs for a long time (for more than forty days) is undesirable (makruh). This is due to the fact that we are asked to take care of our body hygiene and shaving body hairs is one of the ways to achieve that.

Lastly, may Allah give us understanding pertaining our religion. Amin.