IRSYAD FATWA SERIES 272 : THE RULING ON EATING AND DRINKING WITH LEFT HAND 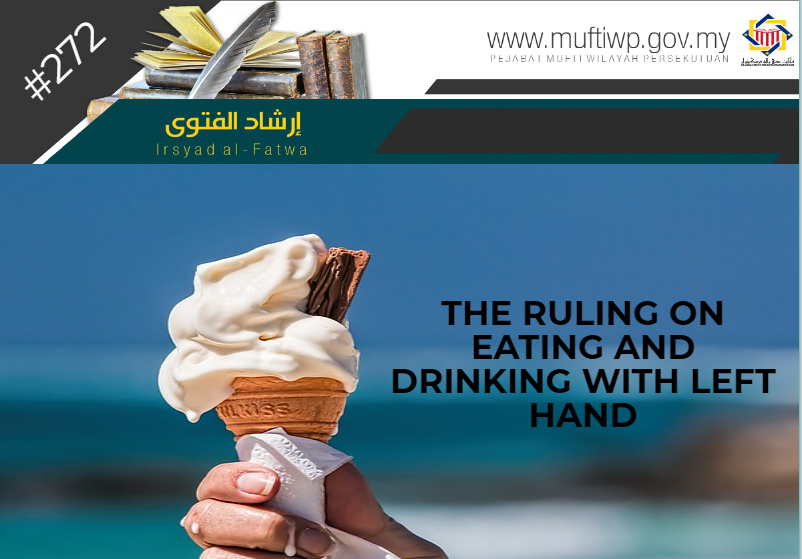 What’s the ruling for eating or drinking using my left hand? When I am using cutleries such as fork, and spoon should I still be using my right hand?

The prophet PBUH always prioritize everything that’s on the right side in his everyday life, if it involves good deeds. From ‘Aisyah RA:

“The Prophet used to like to start from the right side on wearing shoes, combing his hair and cleaning or washing himself and on doing anything else.”

Most scholars in Mazhab Syafi’e hold the opinion of eating with your right hand is just recommended and rewarded, and this is the same as Imam Ghazali and Imam al-Nawawi’s view. (Refer Fathul Bari, 9/522)

There’s one ruling from Imam al-Syafi’e, where he states that the ruling for eating with your right hand is compulsory. (Refer Fathul Bari, 9/522)

This view is also the same as the opinions of muhaqiqqin scholars like Syeikhul Islam Ibn Taimiyyah, Ibn Qayyim and Al-Syaukani. (Refer Al-Mustadrak ‘ala Majmu’ al-Fatawa 4/211, Zad al-Ma’ad2/369 and Nail al-Authar 15/157)

Ibn Muflih wrote an opinion from Ibn Hazm and Ibn Abd al-Barr who prohibit the usage of left hand when eating or drinking in accordance to the literal meaning of the hadith. (Refer Al-Adab al-Syar’iyyah, 3/168)

Discussion of Quranic and Hadith Evidence

Among the evidences that are used by both groups is a famous narration where the prophet Muhammad PBUH instructs Umar bin Abi Salamah RA:

“O boy! Mention the Name of Allah and eat with your right hand and eat of the dish what is nearer to you.”

Badr a-Din al-‘Ainiy said, some of the scholars use this narration to make a ruling that it’s compulsory to eat and drink with your right hand, there are also many warnings to those that doesn’t obey the prophet’s instruction. (Refer ‘Umdah al-Qari Syarh Sahih al-Bukhari 21/29)

Another narration from the prophet PBUH:

“If you should want eat, eat with your right hand. If you want to drink use the right hand too, for the Satan eats with left hand and drinks with his left hand too,”

This is the narration that Imam al-Nawawi referred to when he concludes that eating and drinking with your left hand is undesirable but not prohibited but at the same time he advised us to try our best to avoid anything that would resemble what Satan does. (Refer Syarh Sahih Muslim 13/190-19)

“Don’t eat with your left hand for Satan eats with left hand,”

Other scholars explained that although the narrations ask to use your right hand while eating or drinking and it may seem as though it’s compulsory, however, considering it involves manners and advice, the ruling changed to recommended and rewarded. (Refer Majmu’ah al-Rasa’il al-Fiqhiyyah min Syarh Manar al-Sabil, pg. 172)

According to Imam al-Qurthubi, the instruction in the narration is in the form of recommendation and it’s better to prioritize the right from the left. Just like the practice of prioritizing the things on the right is a virtue. (Refer Al-Mufhim lima Ashkala min Talkhis Kitab Muslim, 5/295)

There’s a narration that stated how the prophet PBUH pray for affliction to someone that refused to eat with his right hand:

“A person ate in the presence of Allah's Messenger with his left hand, whereupon he said: Eat with your right hand. He said: I cannot do that, whereupon he (the Holy Prophet) said: May you not be able to do that. It was vanity that prevented him from doing it, and he could not raise it (the right hand) up to his mouth.”

Imam al-Nawawi said, the prophet PBUH prayed for affliction towards the guy is because he disobeyed the Islamic ruling. (Refer Syarh Sahih Muslim 13/192)

In reference to the narration, Imam al-Munawi viewed the situation as, although the act resemble what Satan does, it doesn’t necessarily forbid the action but refers to the undesirable ruling of the action. In view of the prayer the prophet made towards the guy, it’s because of the guy’s arrogance in refusing to obey the instruction of the prophet PBUH. (Refer Faidh al-Qadir 1/298)

Briefly, after analysing the Quranic evidence, narrations and discussions by Islamic scholars, we could conclude as follows: