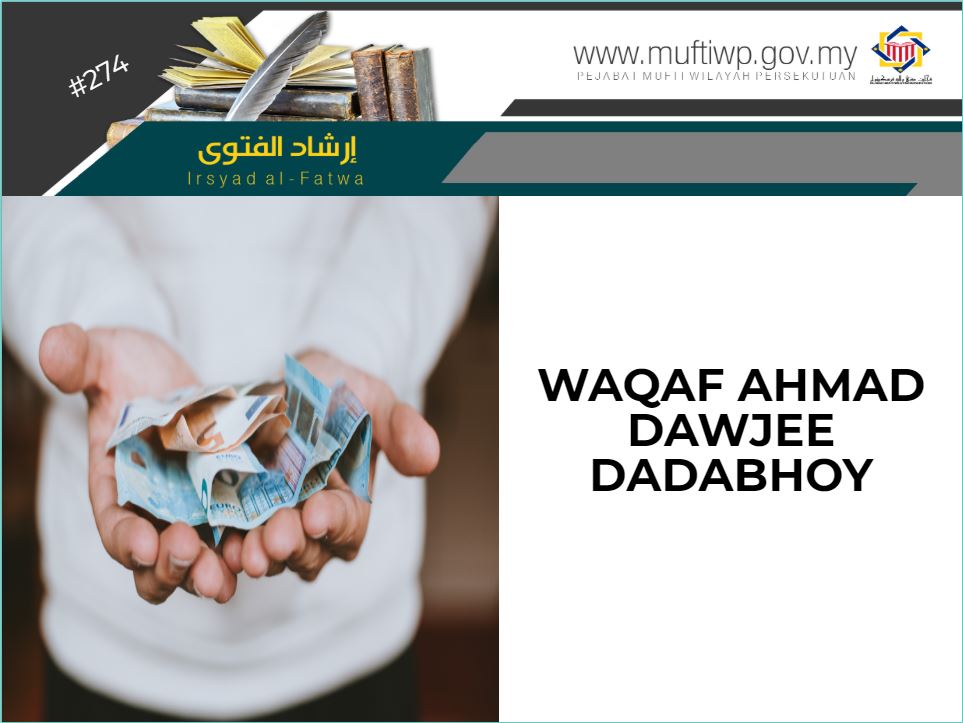 Assalamualaikum SS Dato’ Seri Mufti, can you explain to us about wakaf by Ahmad Dawjee Dadabhoy that we often heard about. Who is he and the wakaf that he did?

Alhamdulillah, praise and thanks to Allah for the many countless blessings He has blessed us all with. Blessings and salutations to the prophet Muhammad PBUH, his family, companions and all those that follow his teachings to the day in the hereafter.

Waqaf is an example of good deed, and a way to help us get closer to Allah. Al-Quran and Al-Sunnah explains about wakaf as a type of worship to Allah. Allah states in the Quran:

“Never will you attain the good [reward] until you spend [in the way of Allah] from that which you love. And whatever you spend - indeed, Allah is Knowing of it.”

When Abu Talhah heard about this verse he suggested that he would want to do wakaf for himself and went to meet prophet Muhammad PBUH to ask for an advice regarding the matter.

Anas RA said: “When the verse is revealed, Abu Talhah quickly went to see the prophet PBUH and said “O messenger of Allah, Allah has stated in His book that said “Never will you attain the good [reward] until you spend [in the way of Allah] from that which you love. And whatever you spend - indeed, Allah is Knowing of it.”

“For me my most loved possession is in Bairaha’” (Narrators said: “It’s an orchard hat the Prophet PBUH usually went to and the Prophet PBUH would take shade under the trees, rest and drink in the orchard”). “Now it is Allah SWT and the Prophet PBUH possession. I only pray for that I would be rewarded for it. And O messenger of Allah use it for anything that you wished for,”. Then the prophet PBUH said, “What a great deed that you did Abu Talhah, we accept your gift but it is too valuable and so we give it back to you. Give it to your family,”. Abu Talhah later on give the orchard to his family members and a narrator said: “Among those that receive it are Ubay and Hassan.”

Just as Allah SWT has stated in the Quran:

“And whatever good they do - never will it be removed from them. And Allah is Knowing of the righteous.”

Whatever good in this verse is general, it means any good deed, and this includes wakaf.

In sunnah evidence, there are a few hadiths, some of them are:

“When a man dies, his acts come to an end, but three, recurring charity, or knowledge (by which people) benefit, or a pious son, who prays for him (for the deceased).”

Islamic scholars commented that waqaf can be considered as recurring charity. While a pious son means someone that obey what Allah has decreed upon him and take care of his relationship with other people.

Umar bin al-Khattab receive a lot of land in Khaibar, he then went to meet the prophet PBUH and ask what he is supposed to do with it. He asked, “O messenger of Allah, I have received a lot of land in Khaibar, I have never receive anything more valuable than this. What am I supposed to do with it?” The prophet PBUH said, “If you wanted to you could give it as wakaf and give to charity any earnings from it,”. Ibnu Umar RA said: Then Umar give the land to charity while saying: “This land will never be sold or gifted or inherited. It’s earnings will be used for charity to poor people, family members, freeing of slaves and people on the of Allah, Ibn Sabil and guests. There’s nothing wrong for the trustee to eat from it but not for the accumulation of wealth.”

Ibnu Sirin said: “Not to monopolize the earnings.”

It’s a well-known fact that Umar RA’s deed stated above is the first wakaf that is done in the history of Islam.

Ahmad Dawjee Dadabhoy was born in the year 1907 in Gujaret, India. After travelling the world, in 1940 he chose to come to Tanah Melayu and stayed in Kuala Lumpur. He’s fluent in multiple languages and love reading and knowledge and have a lot of friends and contacts around the world. At the time, he’s already a rich businessman and a successful tycoon. Early on, he has been giving away his money to charities and through the wakaf institution. Initially, the institution is more of a family wakaf but then changed and named Alwaqful Islami ul Alamee.

At the end of his life, he gave nearly all of his properties which includes 1.2 hectare of land in Jalan Perak, Kuala Lumpur through wakaf. On 24th January 1987, he passed away. Before his passing, he had stated his wish to donate some more of his properties and funds to the Islamic enforcement authorities.

On 18th September 1991, Kuala Lumpur High court ruled that Islamic Religious Council Kuala Lumpur (MAIWP) as the trustee since he didn’t leave any heirs to fulfil his wishes.

“Ahmad Dawjee Dadabhoy has form a wakaf his properties on Islamic side. This is based on his words that is written in The Letter of Declaration of Wakaf and his written acknowledgement witnessed by Syed Mustapha in Syed Wazir.”

Allahyarham’s willingness to donate his million-ringgit estate enable it to be developed and ultimately giving great returns to the Islamic community. The value of his estate before any development was done is estimated to be RM34 million and after its development the value jumped to more than RM151 million.

MAIWP as its legal trustee has done an excellent job in carrying out the responsibilities of developing the wakaf estate and in turn become a pioneer in the development of wakaf estate for the purpose of commercial use in Malaysia. As a result, with the cooperation between MAIWP, Lembaga Tabung Haji (LTH) and Bank Islam Malaysia Berhad (BIMB), the estate is successfully developed. In this smart partnership, LTH acts as the developer offering 100% financing for the development of the MAIWP land and BIMB as the pioneer of Islamic banking in Malaysia as its main tenant. TH properties play the role of project manager. According to the “Built-Operate-Transfer” financing structure, MAIWP will get RM56.6 million in returns for the duration of the estate is being leased to LTH which is for 25 years.

Starting with the generosity of Allahyarham, now it has become a great landmark that Muslims are proud of. The returns and profits from the waqaf estate that MAIWP received will be given back for the benefit of asnaf and Muslim community as a whole. It is certainly a great deed stemmed originally from Allahyarham’s donation through waqaf.

Hopefully more Malaysians will be willing to donate through waqaf for the benefit of the ummah and Islamic economy in the future. Amin.

[1] Al-Maraghi said: “You are not going to obtain anything from your deeds for Allah, as an obedient servant, or get Allah’s blessings and pleasure, rewarded, enter paradise, spared from persecution and torment. (You will obtain them all) if you donate the possession that you love,”

[2] al-Bukhari narrated (607) in the book of al-Wasiat: Chapter of People that donate something to its proxy, then the proxy return it back to him.