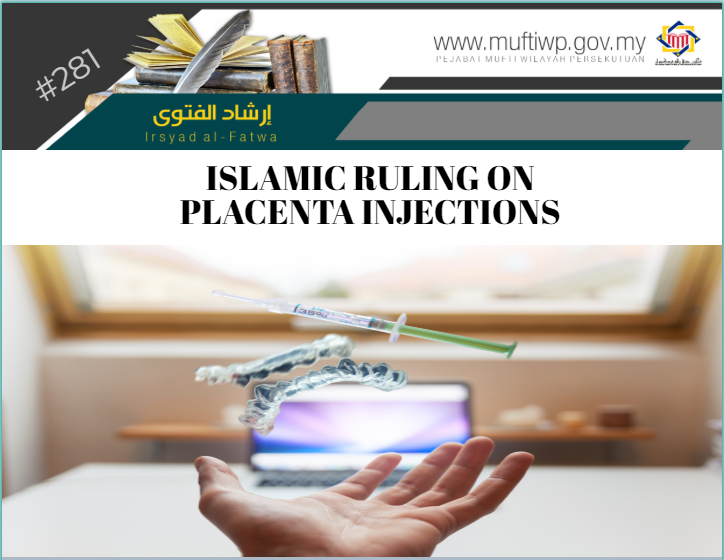 Can Tuan Mufti give your opinion regarding the Islamic ruling of undergoing placenta injections from human or sheep placenta for cosmetic treatment? Thank you.

4th Edition of Kamus Dewan defines placenta as a temporary organ that joins the mother and fetus, transferring oxygen and nutrients from the mother to the fetus and permitting the release of carbon dioxide and waste products from the fetus. It is also known as an afterbirth.

In the world of science today, the placenta is studied and characterized as an organ that joins the expecting host organism and its fetus. The placenta is a temporary organ that is vital in pregnancy of humans and most mammals. The human placenta is the attachment of fetus in the trophoblast stage through the cytotrophoblast section on the endometrium layer of the uterine wall of its mother. The growth of trophoblast on the uterine wall forms an exchange medium for blood cells between the fetus and its mother. This includes the exchange of small protein molecules such as amino acids, glucose, mineral salts, and other important gases such as oxygen and carbon dioxide. These exchanges happen through the placenta via the umbilical cord of the fetus that transports the multifunctional stem cells. It is also through the umbilical cord that waste products are transported to the mother before being excreted out from the body.

Other than providing nutrients to the fetus, the placenta also acts as a hormone secretor. This is important for the healthy growth of the fetus especially after the endocrine function by the ovaries of the mother have stopped due to the closure of the corpus luteum during the eighth week of pregnancy.

Placenta products and their usage

Are there medical benefits of placenta products? The medical benefits of placenta products are still under discussion and research by medical experts. This is due to the fact that there are different parts of the placenta that are being used, for example, the placenta as a whole, estrogen and progesterone hormone, amniotic fluid and stem cell (main cell) that are extracted from the placenta, just to name a few. We state a few literature reviews in placenta usage in the health or medical field as follows:

To date, there are barely any scientific findings supporting the claim that the nutrients in placenta have health benefits. This is due to the difficulty of identifying the active biological material that could give a positive effect to certain health issues or in fulfilling the golden standard of medical practises which is passing the random clinical trials. However, a few paperwork has been published related to the benefits of the placenta and its potential usage. Other than just a few types of research from Korea on the widely used placenta, the clinical trials on animals reported a positive effect on skin regeneration if used using a topical formulation which means direct application onto the skin. It is also found effective in handling menopausal symptoms and fatty liver inflammation. However, there are risks when using this product such as prion disease or virus infection, for example, hepatitis virus infection is always a risk and it is the responsibility of the manufacturers to ensure the safety of their products for consumers.

Placenta products are available in injections, tablets, drink solutions, dried food form or sometimes even in the form of frozen tissues of placenta. The source of the placenta can be from humans, sheep, or swine. Most placenta products are used in the third stage of medical treatment (with advice from an expert) or self-bought food supplement. The following are a few research papers on the usage of placenta’s extract for skin regeneration and wound healing, to increase general health, the treatment of liver inflammation and menopausal symptoms:

There are only a small number of researches run on humans as their test subjects. Four of the researches stated below was run in Korea and one in Japan. However, these research are not focused on beauty but on general health, the treatment of inflammation of fatty liver and treatment of menopausal symptoms.

Looking from another angle, a report issued by Control for Disease Center, CDC on 30th June 2017 recorded a case of a new-born infant contracting Group B Strep infection, Guillain-Barré syndrome, GBS. The infection happened five days after birth and was suspected contracted from the mother’s vaginal infection. However, the results from culture tests and sensitivity vaginal swap were negative and later they found out that the mother took placenta pills that contain the GBS bacteria. [11]

Products based from placenta are usually found in extract form rather than their original tissue form. However, the usage of placental tissues is usually used for medical purposes, especially as skin grafts. The treatment is only used as a last resort in chronic wound cases. Products such as Grafix shows a huge potential in helping to heal chronic wounds that without it the possibility for the wound to heal is very low. [12]

To date, recent media reports from Canada and the United Arab Emirates reported warnings from authorities regarding the usage of placental based products, especially human’s placenta. Products available on the market right now are mostly labelled as food supplements but claims to have practical benefits with no scientific proof.

Placental based products, whether in the original form of placental tissue or in extract form has a great potential to be used in the future. However, to date, the potential is still limited to the usage inside the laboratory and small clinical trials. There is no commercially available product that has been proven effective or safe for the time being. Until these two problems are solved, the usage of placental based products without consulting a doctor is dangerous and should be avoided.

Medication from what is permitted

In Islam, there are a few requisites to medicate and one of it is the medication must be from what is pure. If the medication or treatment uses something that is religiously considered as impure (najis), the original ruling would be it is prohibited if there are other pure things to replace it. Allah SWT states in the Quran:

“And why should you not eat of that upon which the name of Allah has been mentioned while He has explained in detail to you what He has forbidden you, excepting that to which you are compelled. And indeed, do many lead [others] astray through their [own] inclinations without knowledge. Indeed, your Lord - He is most knowing of the transgressors.”

“Allah has not sent a disease without its remedy and made each disease with its remedy, thus make use of medical treatment but do not seek what is prohibited to you,”

Imam al-Nawawi in al-Majmu’ (9/53) when explaining about what is permitted when medicating using najis said: “And the evidence that our madhhab (Syafie) that we refer to is the Uraniyyan hadith [16] that is narrated in al-Sahihain [17] as such as stated before, the permissibility depends on the necessity of drinking it for the purpose of medicating, just as stated in the hadith. As for the hadith “Don’t seek remedy for what is prohibited for you” [18] means when there is no necessity for what is najis and when there are other pure things that can fulfil the need (which can quicken the process of healing and have less side effects) then the najis changed to be of the same position as other pure medications. These are the answers for both (Abu Dawud) hadiths. Al-Baihaqi said: “If both hadiths are sahih, the meaning is, it is prohibited to medicate using something that is intoxicating and prohibited in non-exigent situations (harmonizing) these hadiths and hadith by Uraniyyin.”

The following we state the purity status of each compounds according to Islamic law:

Referring to the book Hasyiah Qalyubi wa Umairah(1/395), the author said : “Placenta that is named al-khalas, the Islamic ruling for it is the same as part of the body (limbs) since it is separated from the child. Thus, it is part of it. However, the placenta when the fetus is still in it, is not part of the mother or part of the child,”. The same is stated in the book Hasyiah al-Bujairimi (1/101): “The placenta that blankets the child is ruled pure (if the origin) from humans and najis if it is from other than humans”.

Imam Ibn Hajar al-Haitami said in Tuhfah al-Muhtaj (1/301): “And whatever that comes out of a woman’s vagina is najis (except fetus), such as the water that comes out with a new-born baby,”

It is prohibited to use najis for medical purposes and beautification if there are other alternatives for the treatment. Refer Irsyad Al-Fatwa Series-30: The Ruling on Vaccination from Islamic perspective.

Apart from the purity of the substance, the factor of humans’ honour should be taken into account when taking medications based from placenta. There are certain cultures where they eat the placenta following the nature of animals. It is said that this diet is good to restore strength and health for mothers who has just given birth. This opinion is controversial and still unproven and there are studies from experts that discourage this act in fear of its negative effect on one’s health. [19] From Islamic perspective, it is prohibited to eat any part of a human as humans are honoured by Islamic law from being eaten. Allah SWT states:

“And We have certainly honoured the children of Adam and carried them on the land and sea and provided for them of the good things and preferred them over much of what We have created, with [definite] preference.”

“Would one of you like to eat the flesh of his brother when dead? You would detest it.”

Imam Fakhrurazi in Mafatih al-Ghaib (28/110): “If it is wrong to eat human flesh then it must be wrong to “chew” on their dignity, for it is a greater wrong because it is more painful.”

Due to this, Lajnah al-Ifta’ Jordan issued a ruling (fatwa) that prohibited the usage of human placenta for the purpose of beautification or medication. However, there is exception for medical purposes if there are no other alternatives with the same effects. [20] They cited the statement of Imam al-Khatib al-Syarbini in Mughni al-Muhtaj(6/160): “For someone who is in exigent or desperate situations, it is permitted for him to eat a part of another human when there no other carcasses available for the honour of a living person is greater than the honour of a dead person.”. This is in accordance with the decision of 13th Majma` al-Fiqh al-Islami Conference under OIC or Organization of Islamic Cooperation in 1992 which state the usage of placenta for medical purposes is permitted. Refer al-Qararat al-Majma` al-Fiqh al-Islami bi Makkah al-Mukarramah (pg. 283).

However, if the placenta is from animal sources and from the permissible animals to be eaten and has been slaughtered following the conditions of the Islamic law, then in Lajnah al-Ifta’ Jordan in fatwa number 2797 said that it is permitted for beautification or medical purposes. [21] However, if the placenta is najis then it can only be used for other than beautification or medical purposes only.

After analysing the statements above, we can conclude that:

May the above explanation benefit us all.

[4] Hye yeon Choi et al. 2014. Alpha-Fetoprotein, Identified as a Novel Marker for the Antioxidant Effect of Placental Extract, Exhibits Synergistic Antioxidant Activity in the Presence of Estradiol. PLOS ONE. Retrieved on 4 January 2019. https://doi.org/10.1371/journal.pone.0099421

[17] The hadith narrated in Sahih al-Bukhari and Sahih Muslim is stronger in terms of the narration compared to Sunan Abi Daud. Wallahua’lam.

“Indeed, Allah did not make a remedy for you from what He has prohibited for you.”