IRSYAD AL-FATWA SERIES 294: THE RULING OF BEING AN IMAM FOR A NON-MAHRAM WOMAN 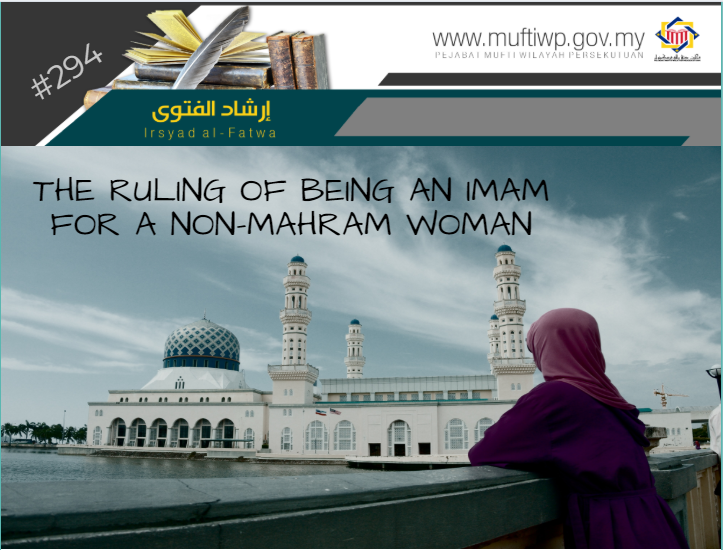 Assalamualaikum. I am a single guy trying to be a better person. I live with my girlfriend in the same house and we sleep together in the same bed. We perform our prayers together, and I am the imam for her.

Is my prayer valid if I act as the imam to a non-mahram woman when there are just the two of us praying together?

Since we are renting the house together, for the moment we are unable to move out to live separately because we are bound under our rent contract agreement.

Living together as a couple when you are not married to each other is prohibited in Islam. This is in accordance with a hadith by Ibn Abbas RA, where the Prophet PBUH said:

“No person (man) should be alone with a woman except when there is a Mahram with her."

Imam al-Nawawi Rahimahullah comments on the above hadith: “No man should be alone with a woman unless the woman’s mahram is present. And if an ajnabi man is around a woman alone without a third party, then his action is sinful and prohibited according to the consensus of the scholars. It is the same (ruling) if there is someone else with the man and woman but the presence of the person does not affect (does not evoke the feelings of shame) to the couple. For example, the presence of a baby or a child does not evoke the feelings of shame for the man or woman for the child is too young to understand, then even with the presence of the child, it is still as if the man and woman is just by themselves.” Refer Syarah Sahih Muslim, Al-Nawawi (9/109).

The wisdom of the prohibition is to prevent the things that could lead to adultery. The reason is, the act of being alone (a man and a woman) itself is a great opportunity for shaytan and a great fitnah to them. Abdullah Ibn Umar RA state that the Prophet PBUH said:

“Behold! A man is not alone with a woman but the third of them is Ash-Shaitan.”

Syeikh Muhammad bin Abd al-Rahman al-Mubarakfuri Rahimahullah states in his commentaries: “Shaytan will be with them (the man and woman) and whispers desires in their hearts until they fall into adultery.” Refer Tuhfah Al-Ahwazi, Al-Mubarakfuri (6/320).

Thus, according to the above evidences, it is clear that it is sinful and prohibited for a man to be alone with a woman, whether it is in a park, room, rented house, hotels and others.

Our advice to you is to quickly marry your girlfriend or hasten the process of your marriage. After all, you are in love with each other and the greatest form of love is to make your relationship permissible through marriage. A hadith from Ibn Abbas RA states, the Prophet PBUH said:

“There is nothing like marriage, for two who love one another.”

In the commentaries of Imam al-Son’aani, he cited the opinion of al-Thibi stating: “When a man looks at an ajnabi woman, then the woman took hold of his whole heart, then marrying the woman will result in the increase in love (for both of them).” Refer Al-Tanwir Syarah Al-Jami’ Al-Saghir, Al-Son’ani (9/106).

Imam al-Son’aani then adds: “The greatest remedy for love is marriage. Marriage is a form of treatment for love, and one will never find a cure for love until they marry the person they love.” Refer Al-Tanwir Syarah Al-Jami’ Al-Saghir, Al-Son’ani (9/106)

Furthermore, marriage is considered as a good deed and has many benefits, for it is a road that leads to taqwa and prevents sins. We have explained the purposes and wisdom regarding the sanctioning of marriage in Al-Kafi Series 696 : Marriage Invites Riches? And it can be accessed through the link https://bit.ly/2tCRlJf

Regarding the issue of being the imam to a non-mahram woman, we share the opinions of Syafi’eyyah scholars regarding this issue. Imam al-Shirazi answers this question in his book Al-Muhazzab fi al-Fiqh Al-Syafi’e:

“It is undesirable (makruh) for a man to pray with an ajnabi woman (non-mahram/stranger) according to the narration of the Prophet PBUH: “Behold! A man is not alone with a woman but the third of them is Ash-Shaitan”

Whereas, Imam al-Nawawi comments on the statement of Imam al-Shirazi saying:

“The meaning of makruh here is tahrim makruh. If the man is alone with the woman.”

“Our ashab (Syafi’eyyah scholars) said: When a man acts as the imam for his wife or his mahram (alone), then it is permissible and not makruh. The reason being, it is permissible for him to be alone with her (his wife or his mahram) outside of prayer. If he is the imam for an ajnabi woman alone, then it is prohibited for them (the man and woman). This is in accordance with sound hadiths that I will include later Insha Alah. And if he becomes the imam for ajnabi women, then there are two opinions regarding the matter. The majority of scholars ruled it permissible.” Refer Al-Majmu’ Syarah al-Muhazzab, Al-Nawawi (4/173).

However, the prayers performed by the man when he was alone with an ajnabi woman is valid. This is due to infikak al-jihah (a different matter/a different angle) of the issue. It is prohibited because the man is alone with an ajnabi woman while it has no connection with the act of praying. If the congregational prayer fulfils its requisites and conditions, then it is valid.

This situation is the same as praying while wearing a stolen shirt. The act of stealing is prohibited, while the prayer is still valid.

As an additional information, if a man prays as the imam for his fiancée, while there are other family members or people around, even if no one other than the man and his fiancée is performing the congregational prayer with them, then it is not prohibited for there are no elements of a man and an ajnabi woman being alone with each other.

As a conclusion, we would state that the act of a man praying alone with an ajnabi woman alone is prohibited. While the prayer is still valid, if it fulfils the requisites and conditions.

Our advice to you, hasten the process of your marriage and always make doa to Allah SWT as follows:

Rest assured that anyone that leaves something for the sake of Allah SWT, surely Allah SWT will replace something better for him.

Lastly, your question arises from the feeling of wanting goodness in your life. May Allah SWT ease your and all our affairs and may He make it easy for us to be the best of His servants.