IRSYAD AL-FATWA SERIES 296: THE RULING OF NOT ATTENDING A WEDDING INVITATION THROUGH FACEBOOK 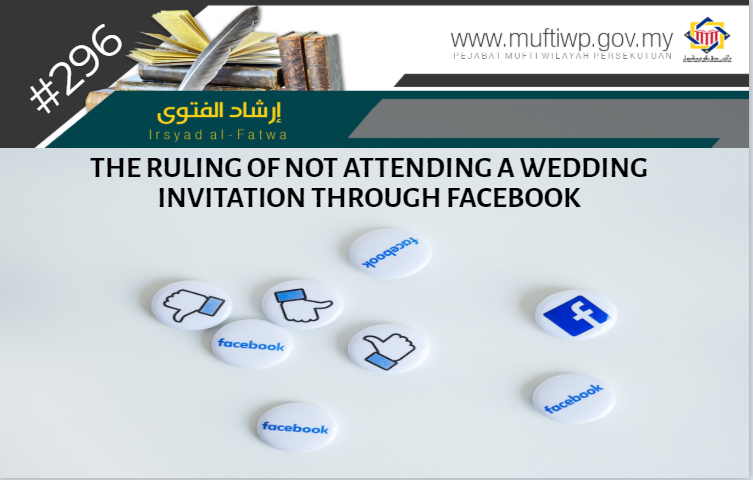 Assalamualaikum, w.b.t, S.S Mufti, I was invited through Facebook to a wedding ceremony, but I did not attend the wedding. What is the ruling for it?

According to Al-Feqh al-Manhaji, Al-Walimah comes from the root word الولْم which means a gathering or assembly. It is named as such for the husband and wife gather together (for their wedding).

Al-Walimah also describes the food for the wedding, or the food prepared for the people invited to the wedding. Refer Al-Feqh al-Manhaji (2/92).

Generally, attending wedding invitations is commanded. And for everything commanded in the Quran or al-Sunnah results in the obligation of it, unless there are other evidences or reasons that change its ruling.

The Ruling of Attending or Fulfilling Invitations

Majority of the scholars obligate attending wedding invitations. They ruled it as an obligation referring to a hadith from Ibn Umar RA, where the Prophet PBUH said:

“When one of you is invited for a wedding feast, he must attend it.”

The Prophet PBUH used the word فَلْيَأْتِهَا, which is an imperative clause which results in the obligation of it according to methodology of fiqh.

Imam al-Nawawi in his commentaries of the above hadith said: “The agreed opinion in our mazhab ruled it fardhu ‘ain (individual obligation) for those who are invited, however, the obligation is abrogated if:

Basically, if he knows that there are transgressions or sins in the event or ceremony, then it is his obligation to prevent the transgressions if he is capable, but if he is incapable to do so, then he should not attend the event.

Regarding the issue of attending an event where there are wrongdoings in it, we have explained it in Irsyad al-Fatwa Series 224 : The Ruling Of Sitting In An Event Where Alcoholic Beverages Are Served through the link http://bit.ly/sittingineventswheretherearealcoholicbeverages

This is in accordance with a hadith narrated by Abu Hurairah RA, where he said:

“The worst food is that of a wedding banquet to which only the rich are invited while the poor are not invited.”

“…when he invites you to a feast accept it,”

The obligation from the above hadith is only when the invite comes from another Muslim.

As for attending wedding ceremonies of non-Muslims, mazhab Syafie ruled it sunnah, if the invite is from family members, friends, or neighbours and if their attendance would benefit Islam. Refer Nihayah Al- Muhtaj, Al-Ramli (6/371).

Imam al-Marwadi from mazhab Hanbali agreed with the above opinion, citing the opinion of Imam Ahmad and Ibn Qudamah. Refer Al-Insaf, Al-Mardawi (8/320).

We would like to add that there are other reasons that permits one from not attending wedding ceremonies, such as:

Dr Wahbah al-Zuhaili said: “Among the reasons that abrogate the obligation of attending invitations are: traffic jam, heavy rain, road closure, sickness, and others like it.” Refer Al-Fiqh Al-Islami wa Adillatuh, Al-Zuhaili (9/6622).

Imam al-Nawawi further adds: “Al-Qadhi states that the scholars have agreed on the obligation of attending a wedding invitation.” Refer Al-Minhaj, Al-Nawawi (9/570).

They refer to a hadith from Abu Hurairah RA, where the Prophet PBUH said:

“Whoever does not accept an invitation has disobeyed Allah and His Messenger.”

Second: It Is Sunnah to Attend Invitations Other Than Wedding Ceremony

Islamic scholars ruled it sunnah to attend any events or ceremonies that are other than wedding ceremonies, such as receptions, farewell, aqiqah ceremony, and others.

Imam al-Nawawi said: “As for other than wedding ceremony, there are two opinions; first, the ruling is the same as wedding ceremonies (obligated) and second, it is mustahab (sunnah).”

He included the opinion of Imam Malik and majority of the scholars: “It is not obligatory to attend invitations (other than wedding ceremonies).” Refer Al-Minhaj Syarah Sahih Muslim, Al-Nawawi (9/570).

The Ruling of Attending Wedding Ceremonies Invited Through Facebook

Through the advancement of technology, there are notable lifestyle changes, and this includes the way invites for wedding ceremonies are sent. Hence, we state the method used in determining the ruling for this issue:

“A ruling is based on the custom.”

This means, a custom can be made as a determining or concluding factor of issues where there are no Quranic or prophetic evidences that explains about its ruling.

Hence, generally, the ruling for it is permissible. This is in accordance with:

“The means (tools) depends on the ruling of the maqasid.”

Thus, if someone’s intention is to invite people to his wedding, then it is permissible for him to use any means available for him, whether it is by invitation card, or social media applications, such as Facebook, Twitter and others.

As a conclusion, we would like to explain that usually invites made through Facebook event is used as a process to determine how many friends of the bride and groom are attending a certain wedding event. Furthermore, usually they would include the wedding invitation if we click the going button.

However, if the invite is a public invitation where they invite you along with a huge group of people, then it is not an obligation for you to attend the wedding. The same applies to invites from Facebook events, WhatsApp groups and others where it is the form of public invite to the ceremony.

It is an obligation if there are no reasons that restrict you from attending the event. However, if you are restricted from attending the wedding ceremony due to the reasons stated above, then it is not considered as a sin. The best way would be to send an apology to the person that invites you and make du’a to Allah SWT for blessings and happiness for the couple.

May Allah SWT give us the right understanding in our religion. Ameen.