IRSYAD AL-FATWA SERIES 297 : WHOEVER INSULTED THE PROPHET PBUH SHOULD BE PROSECUTED? 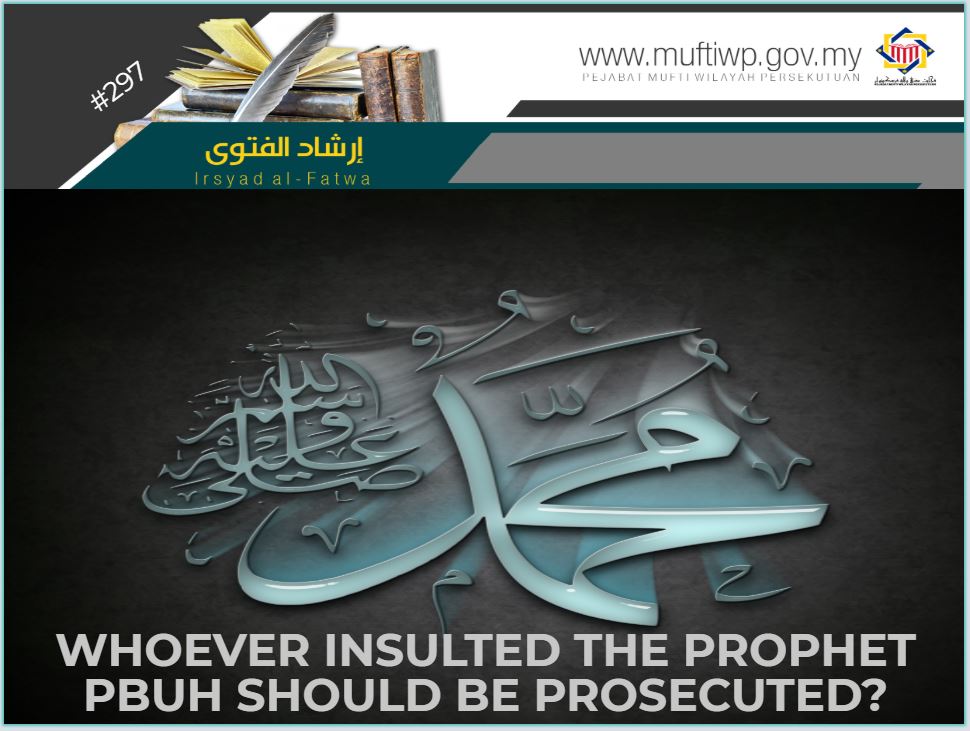 Assalamualaikum wbt, regarding the issue of the insult towards our beloved Prophet PBUH and Ummul Mu’minin Sayyidatina Aisyah R.Anha. I want to ask; What is the punishment for those who insults the Prophet, and can the public carry out the punishment themselves? We really need an answer from ulama for our next plan of action. Jazakallahu khairan for your answer.

The issue of the insult towards the Prophet PBUH and Ummul Mu’minin Aisyah R.Anha is a serious and grave matter. Allah SWT states:

“And among them are those who abuse the Prophet and say, "He is an ear." Say, "[It is] an ear of goodness for you that believes in Allah and believes the believers and [is] a mercy to those who believe among you." And those who abuse the Messenger of Allah - for them is a painful punishment.”

Syeikh al-Maraghi said in his commentaries: “Hurting the Prophet PBUH after his death is the same as hurting him while he was still alive. The belief in the Prophet PBUH would prevent a mu’min from doing anything that could hurt him. It is a great sin and disobedience.”

“Indeed, those who abuse Allah and His Messenger - Allah has cursed them in this world and the Hereafter and prepared for them a humiliating punishment.”

“Allah's Messenger (ﷺ) said, "Whoever possesses the (following) three qualities will have the sweetness of faith (1): The one to whom Allah and His Apostle becomes dearer than anything else; (2) Who loves a person and he loves him only for Allah's Sake; (3) who hates to revert to atheism (disbelief) as he hates to be thrown into the Fire."

“Whoever insults Allah SWT, or insults one of the prophets, then kill him.”

From Abd al-Hamid bin Abd Rahman bin Zaid bin al-Khattab, he was in Kufah representing Umar bin Abdul Aziz, “I found a man insulted you in Kufah, and he is proven guilty for insulting you, thus, I was going to kill him, or cut his hands, or cut his tongue, or cane him, but I thought that I would better consult the matter with you first.”

This shows how great the offence of insulting the Prophet PBUH is. As a conclusion, the government has a right to take legal actions against anyone inciting fitnah in our society by insulting the Prophet PBUH. The authors of al-Fiqh al-Manhaji (8/142) state the responsibilities of non-Muslims in a Muslim country: “They are permitted to only say good things about the religion of Islam. If they degrade the Quran, the Prophet PBUH or insults Allah SWT’s legislation, they are to be punished through ta’zir.”

Originally, the punishment of ta’zir is meant as ta’dib (a lesson/to educate) offenders and society. Thus, authorities should use the power given to them by Syarak wisely in handling these cases to prevent it from recurring. Other than punishments, the most important thing that the government and Muslims should do is to spread and educate people about the true character of the Prophet PBUH, removing doubts and prejudice towards our beloved prophet. It may be due to their ignorance and misinformation that results in their poor actions. Thinking through the effects of our approach in dakwah is known as Fiqh al-Ma’al. Allah SWT states:

“And do not insult those they invoke other than Allah, lest they insult Allah in enmity without knowledge.”

Ibn Kathir said: “Allah SWT and His Messenger the Prophet PBUH prohibit the believers from insulting the god of idolaters even if there is truth in them. The reason being, it could lead to a greater harm, for they would return the insult the God of Muslims, while Allah SWT is Rabb where, there is no other God except Him.” See Tafsir Ibn Kathir (3/272)

“I do not want the people to say that Muhammad kills his Companions.”

The above hadith is about the hypocrites led by Abdullah bin Ubai, where he said: “By Allah! If we return to Al-Madinah indeed the more honourable will expel therefrom the meaner.” This made Saidina Umar angry and he asked the permission from the Prophet PBUH to kill the hypocrites. Thus, the Prophet PBUH answered as stated above.

Al-Hafiz Ibn Hajar said: “It is feared that the killing (as punishment) would lead to fitnah towards the religion, making people fear Islam and keeping them away from Islam.” See Fath al-Bari (3/392)

Hence, in the context of Malaysia where we have our own legislation system to prevent the acts of insulting Islam, we should report to the authorities anything in the form of words, statements, actions and behaviour that could be perceived as an act of insult towards the Prophet PBUH, so that they will be punished in accordance with our law. We cannot take actions in our own hands without going through the proper channels, especially using force, for it would affect the image of Islam, Muslims and our country’s peace, referring back to the statement by al-Hafiz Ibn Hajar; “It is feared that the killing (as punishment) would lead to fitnah towards the religion, making people fear Islam and keeping them away from Islam.”

May this explanation give understanding and guidance to the questioner.