IRSYAD AL-FATWA SERIES 304: THE RULING OF BEING A CAREER WOMAN 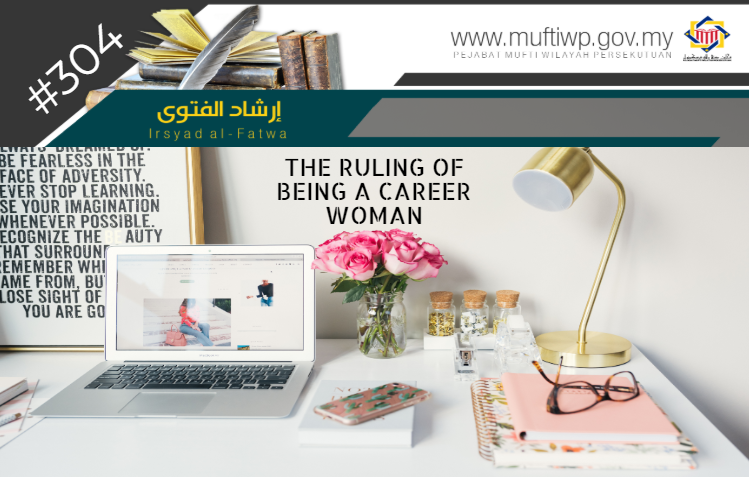 Assalamualaikum SS Dato’ Seri Mufti. What is the ruling of woman working according to Syarak?

Going through life, as humans, it is normal to improve and establish civilizations and communities. Thus, having successful careers is important in a person’s life as a means of financial support. In the past, agriculture, farming and business are the main sources of income. These three fields later are developed into various other fields according to the current needs of communities.

Working and providing for a family used to be the responsibility of the husband or father. This was the custom. However, as life and communities progresses, man and woman are now working together, being in the workforce competing in education and job opportunities.

Hence, this time, we will specifically discuss the issue of woman working. Generally, women work in order to help her husband in organizing the household. Thus, women are also known as rabbatul bait. Housewives usually cook, clean, take care of the children, while at the same time plant vegetables as well as rearing chicken and ducks at home.

Then, women start to venture into the workforce as teachers and other suitable careers. Some even open up their own businesses, taking the example of the first Ummul Mukminin, Khadijah R.Anha who was a successful corporate figure. The same can be said regarding al-Syifa’ R.Anha who worked as supervisor in markets during her time. There were also women companions who treated the wounded during wars. While Ummu ‘Atiyyah was a midwife who helped other women giving birth.

Hence, women having careers are not something that is absurb or unacceptable in Islam. Dr Yusuf al-Qaradhawi states in his book Fatawa Mu’asirah (translated.), 2/202-205 : “However, undoubtedly, the primary and greatest career of a woman is to teach and nurture whole generations. This is the role given by Allah SWT especially for woman, where they are prepared physically and mentally. Woman should not be distracted from this honoured role due to material things or moral issues. The reason is, no one could ever replace them in fulfilling this great task. This is a vital task in determining the future of Islam. Through this task, it will result in the greatest of treasures, which is the riches of human character and conduct.”

A mother is a school who prepares

A woman’s role is to manage the household and be a source of happpiness for the husband. Other than that, she is also responsible in providing calmness, fondness and love. It is recorded that being a great companion for her husband is considered as jihad for a woman.

However, it does not mean that working outside of the house is prohibited according to syarak, for no one can prohibit something and claim it is according to syarak without clear evidences. When basically the basis of every thing and action is permissible, as we all know.

According to this basis, we state that originally, it is permissible for a woman to work. Furthermore, it could even be sunnah or an obligation for her if it is a necessity. For example, if a widow without any source of income, or anyone who can support her, while she is able to work to provide for herself and her needs.

Moreover, if the family situation of the woman calls for her to help her husband financially in order for them to provide for their children or elderly parents. An example of this is stated in the Quran regarding the story of two daughters and a very old man. The daughters take over the role of their father as a shepherd:

"We do not water until the shepherds dispatch [their flocks]; and our father is an old man."

Another example is about Asma’ binti Abu Bakar, or also known as the owner of two belts, who helped her husband, Zubair bin al-Awwam to manage the horses and carve rocks. She is very determined that she even carry rocks on her head to build wall for her farm which is far from Medina.

There are also circumstances where the community itself is in need for woman to treat other women, teach children and other jobs which is specilized for women. However, the most important thing to consider is that women are supposed together with other women, not with men.

Whereas the involvement of men in certain situations based on necessity is permissible, following certain limitations and conditions by syarak.

When we rule it permissible for women to work, then it must follow the following conditions:

“And tell the believing women to reduce [some] of their vision and guard their private parts and not expose their adornment except that which [necessarily] appears;”

“And let them not stamp their feet to make known what they conceal of their adornment.”

“Then do not be soft in speech [to men], lest he in whose heart is disease should covet, but speak with appropriate speech.”

However, we would like to emphasize that career women must understand her real responsibility as a wife for her husband and a mother for her children who need her love and care at home. This will bring forth the love, rahmah and sakinah in a household which will ultimately lead to Baiti Jannati. Understanding the responsibilities and rights as a mother and wife, and putting the best effort to fulfil it will turn her into a respectable woman who has a happy family.

Lastly, we would like to close our discussion with the following supplication: