IRSYAD AL-FATWA SERIES 328: PAINTING ONE’S HOUSE USING WHAT IS THOUGHT TO BE HOG/BRISTLE PAINT BRUSH (BRUSH MADE FROM PIG’S HAIR) 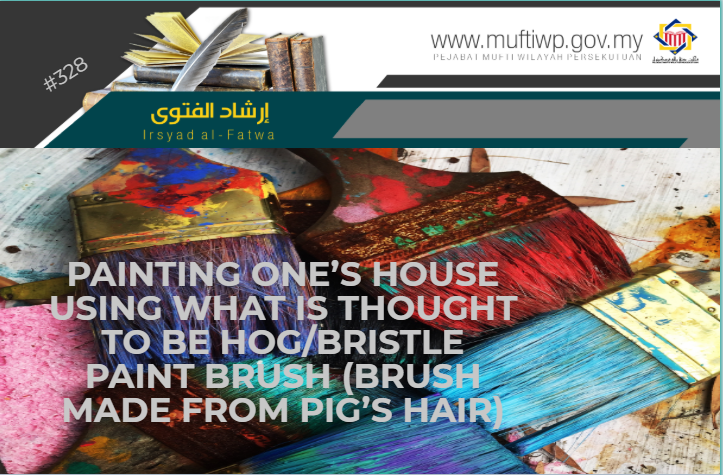 Assalamualaikum Dato’ Seri Mufti. I’ve painted almost 100% of my house with a brush that I feared may have been made from pig’s hair. Although I try to pretend that it is not so, but deep in my heart I think that it is made from this prohibited material after doing a search on the internet. I became anxious and starts to think whether now all my walls are considered impure and does all my family’s and my worship are invalid for we have physical contact with the said walls?

Hope for an explanation from Mufti, thank you.

Allah SWT prohibit the Muslim ummah from benefitting from anything taken from swine. Allah SWT state in the Quran:

“Prohibited to you are dead animals, blood, the flesh of swine, and that which has been dedicated to other than Allah, and [those animals] killed by strangling or by a violent blow or by a head-long fall or by the goring of horns, and those from which a wild animal has eaten, except what you [are able to] slaughter [before its death], and those which are sacrificed on stone altars, and [prohibited is] that you seek decision through divining arrows. That is grave disobedience.”

Ibnu Kathir commented on the above verse saying that the meaning of the flesh of swine is a general statement (aghlabiyyah), in fact, it includes all parts of swine even its fat. (Refer Tafsir Ibn Kathir, 2:36)

Besides, it was once said by the Prophet PBUH in a hadith:

"Allah, the Mighty and Sublime, and His Messenger have forbidden the sale of alcohol, dead meat, pigs and idols." It was said to him: "O Messenger of Allah, what do you think of their fat of dead animals, for it is used to caulk ships, it is daubed on animal skins, and people use it to light their lamps?" He said: "No, it is unlawful." Then the Messenger of Allah said: "May Allah, the Mighty and Sublime, curse the Jews, for Allah forbade them the fat (of dead animals) but they rendered it, sold it, and consumed its price."

From the above evidences, it is clear to us that it is prohibited to use or benefit from any parts of swine. However, in exigent situations that could lead to death or great harm, it is permissible to benefit from swine according to the statement of Allah SWT:

“He has only forbidden to you dead animals, blood, the flesh of swine, and that which has been dedicated to other than Allah. But whoever is forced [by necessity], neither desiring [it] nor transgressing [its limit] - then indeed, Allah is Forgiving and Merciful.”

Likewise, it is bound with another maxim which state:

“Exigent situations are determined according to its degree,”

“Certainty is not abrogated by suspicion.”

The same is stated in another Islamic legal maxim:

“What has been determined through certainty will not be abrogated unless with another certainty,”

The reason is, dzan (assumption) does not affect a certainty. Allah SWT state:

“…and indeed, assumption avails not against the truth at all.”

Thus, don’t be too cautious and try to find out an uncertainty that would end up burdening us in the future. Allah SWT state in the Quran:

“O you who have believed, do not ask about things which, if they are shown to you, will distress you.”

However, it is best to replace the paintbrush with another paintbrush which is believed to be made from permissible materials to paint the rest of the house which has not been painted. The Prophet PBUH said:

According to the above discussion, we would like to state that the walls that have been painted with a paint brush that is feared to be made from swine’s hair is just a suspicion or assumption where it is not a certainty proven with concrete proof. Thus, one should ignore and neglect his suspicions and believe with the original purity of it. Indeed, Allah SWT do not burden His slave from anything that He has commanded in His sanctions. Allah SWT state:

“…and (He) has not placed upon you in the religion any difficulty.”

May Allah SWT give us understanding and guidance in practising His commandments the best we could. Amin.