IRSYAD AL-FATWA SERIES 333: THE RULING FOR MARRIAGE BETWEEN HUMAN AND JINN 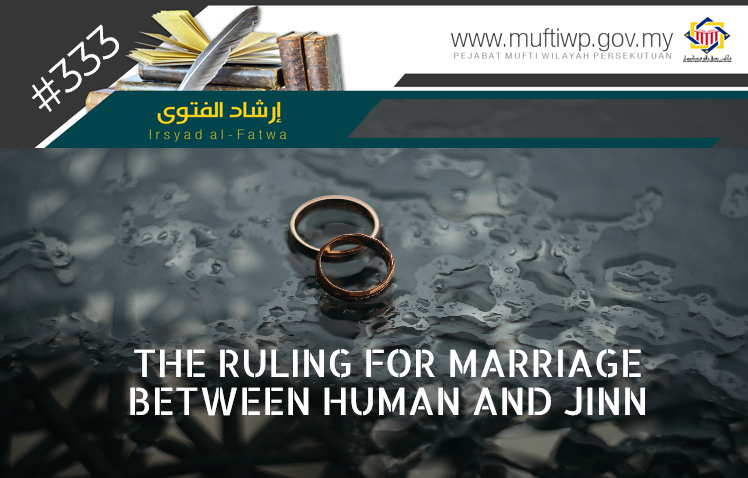 Assalamualaikum ustaz, is it permissible for a human being to marry a jinn?

Jinn is one of the creations of Allah SWT. It is created before the creation of the Prophet Adam AS. Allah SWT state:

“And We did certainly create man out of clay from an altered black mud. And the jinn We created before from scorching fire.”

He states: “And the jinn, We (Allah) created it beforehand, which is before the creation of human (Adam) from scorching fire. Ibnu Abbas narrated: Scorching fire that kills.” See Tafsir Al-Qur’an al-‘Azhim, Ibn Katsir (5/10).

Syeikh al-Maraghi said: “We created the jinn before the creation of the Prophet Adam AS. It is created from fire, scorching hot breeze, searing, burning and killing anyone that comes in contact with it.” See Tafsir al-Maraghi, (14/20).

In a hadith narrated by Saidatina Aisyah R.Anha, she said, the Prophet PBUH said:

According to Ibnu Abbas, Ikrimah, Mujahid, al-Hasan and others, regarding the creation of jinn from “مَارِجٍ مِنْ نَارٍ”, it means the end of burning fire (طرف اللهب) and in another narration it is meant as من خالصه (pure fire). See Al-Bidayah wa al-Nihayah, Ibn Katsir (1/59).

The jinn are generally divided into three. This is in accordance with a hadith narrated by Abi Tsa’labah al-Khusyaniy RA, where the Prophet PBUH said:

“The jinn are from three groups. The first group has wings and can fly in the air, the second group is in the form of snake and dog while the third group leads a nomadic lifestyle (just like the Bedouins).”

We have discussed in-depth regarding whether the jinn in included as mukallaf (accountable) which whether the commandments and prohibitions of syarak is applicable for them in Irsyad Usul al-Fiqh Series 41: Are the Jinn Considered as Mukallaf?

In explaining the above presented issue, we would like to state that generally, scholars have differing opinions regarding the ruling of humans marrying jinn. Syeikh Abu Hamid al-‘Imad bin Yunus Rahimahullah said: Yes, it is permissible for humans to marry jinn.

Whereas Syeikh Syarafuddin al-Barizi said: It is impermissible for a man to marry a female jinn. This is in accordance with two of the following statements of Allah SWT:

“And Allah has made for you from yourselves mates,”

The same is stated in another statement of Allah SWT:

“And of His signs is that He created for you from yourselves mates that you may find tranquillity in them,”

Commentary scholars explained both verses stating: (Allah SWT has created mates for you) from your own kind, according to the process of your creation. This is as stated by Allah SWT:

There has certainly come to you a Messenger from among yourselves.”

Its meaning is: From among the children of Adam.

The scholars who prohibit marriage with jinn also included a weak hadith to support their argument. The hadith is as the following:

“The Prophet PBUH prohibit the marriage with jinn.”

The same is the opinion of Syeikh Yusuf bin Ahmad al-Sijistani who is a Hanafiyyah jurist, he said: The marriage between human and jinn is impermissible. Refer Munyah Al-Mufti ‘an Al-Fatawa Al-Sirajiyyah.

In another argument, it is stated that marriage is sanctioned in order to cultivate love, calmness (between the couple) and mahabbah. These traits are not a part of the jinn.

Syarak also does not permit the marriage between human and jinn. Furthermore, Allah SWT state:

“Then marry those that please you of [other] women,”

The word women mean: The name specifically given for female human. Then, the prohibition on those other than them is applicable (other female creations). This is in accordance with Islamic legal maxim: “The original ruling for genital is prohibited unless there is evidence that permits it.”

To conclude, we would like to state that according to the above discussion and evidences presented, marriage between human and jinn is impermissible. This is in line with maqasid syarak from the sanctioning of marriage is between a male and female human, resulting in love and care and continuing of lineage from among the man and woman. Furthermore, syarak emphasized kafaah which is compatibility between the couple in a marriage.

Lastly, may Allah SWT give us the right understanding in religion. Amin.