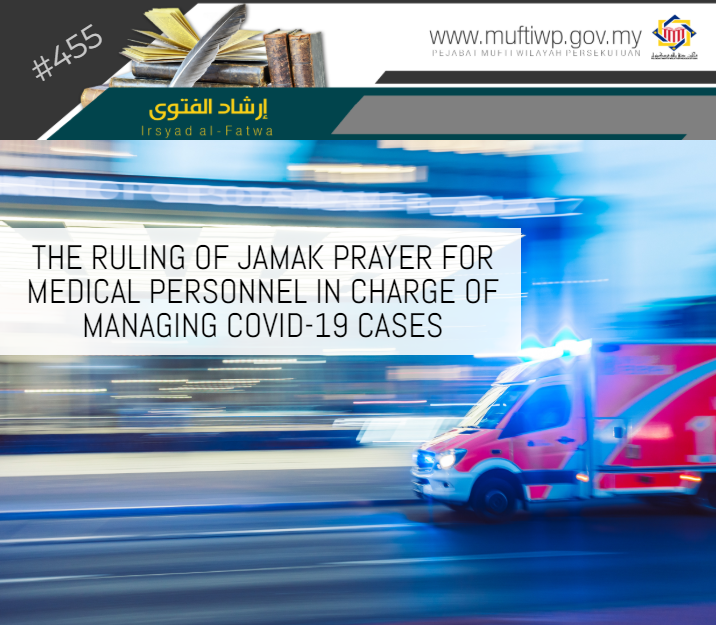 The five obligatory prayers which are the Subuh, Zohor, Asar, Maghrib and Isya’ should be performed in their respective prayer times. This is according to the statement of Allah SWT:

Syeikh Mustafa al-Maraghi said that Allah SWT has sanctioned the obligatory prayers at specific times. This means that this is the ruling set by Allah SWT and this obligation should be fulfilled as early as possible at the specific times. Among the wisdoms is that if there are no set specific times for prayer, then surely, people would leave or neglect the obligation. (Refer Tafsir Al-Maraghi, 5/143-144)

In the hadith narrated by Buraidah, there was a man who asked the Prophet PBUH regarding the specific times of prayer. Thus, the prophet PBUH replied:

Among the facilitation (rukhsah) Allah SWT has given for this ummah is that it is permissible to jamak two obligatory prayers in certain situations such as when a person is travelling, sick, when it is raining heavily and others. This is based on the statement of Allah SWT in the Quran. Allah SWT states:

“…and has not placed upon you in the religion any difficulty.”

The same is stated in another verse of the Quran:

“Allah intends for you ease and does not intend for you hardship,”

Coming back to the main issue, jamak means assembling or joining two prayers in one prayer time. It is either combining the Zohor and Asar prayers or Maghrib and Isya’ prayers. Imam al-Nawawi said:

“In our madhhab (madhhab al-Syafie) it is permissible to jamak Zohor and Asar prayers or Maghrib and Isya’ prayer at either time that he prefers. This is also what has been agreed by scholars.” (Refer Al-Majmu’ Syarh Al-Muhazzab , 4/249)

Basically, in madhhab al-Syafie, jamak of two prayers are permissible for three reasons:

In a hadith narrated from Ibnu Abbas RA, he said:

The Messenger of Allah (ﷺ) combined the noon and afternoon prayers, and the sunset and night prayers at Medina without any danger and rain. He was asked: “What did he intend by it?” He replied: “He intended that his community might not fall into hardship.”

It can be understood from the above hadith that if a person has a valid excuse or a desperate need, then it is prioritized for him to jamak his prayer.

Imam al-Nawawi cited the opinion of several scholars from madhhab al-Syafi’e such as Al-Qadhi Husain, Abu Sulaiman Al-Khattabi, Al-Ruyani, Abu Qasim Al-Rafi’i and others. They state that it is permissible to jamak one’s prayer if he fears for himself or is sick. It can be performed either through taqdim or ta’khir. This choice is given for those who are in involved in or experience something that prevented them from praying. Furthermore, fearful situations are prioritized compared to heavy rain. (Refer Al-Majmu’ Syarh Al-Muhazzab, 4/263)

Imam Abdullah al-Kharasyi al-Maliki stated that jamak is not only for travellers but in any situation that would burden a person to perform ablution and pray in the prayer time. Especially if a person in a situation that would make it harder for him compared to a person who is travelling or if there is heavy rain. (Refer Syarh Mukhtasar Khalil, 5/120)

For madhhab Hanbali the reason of the permissibility of jamak is wider. Syeikh Dr Wahbah al-Zuhaili listed 8 reasons that make jamak permissible according to madhhab Hanbali. Among the listed reasons is when a person is involved in an important matter of which if he does not jamak his prayer then it would lead to greater harm. (Refer Al-Fiqh Al-Islami Wa Adillatuhu, 2/510)

He further said, it is permissible to jamak the prayers if there is a necessity and it should not be considered as a custom. He based this opinion with the hadith narrated by Ibnu Abbas. (Refer Al-Mughni, 2/121)

Syeikh Abdurrahman al-‘Asimi al-Najdi states, it is permissible to jamak one’s prayers if there is an excuse and necessity such as an important task that if the task is left then it would result to a great harm. (See Hasyiah Al-Raudh Al-Murbi’ , 2/401)

Especially if the task involves human lives, of which he cannot easily just leave his task such as medical personnel in charge of the COVID-19 cases. It is prioritized for him to jamak his prayers to avoid completely leaving his prayers.

"Whoever combines two prayers without any excuse then he has committed something from the major sins."

Imam al-Tirmizi said the sanad of this hadith is weak according to hadith scholars, however, it is applied by jurists. Thus, according to this hadith, it is not wrong to jamak two prayers when there is a necessity or excuse. Hence, in our opinion there is a need for medical personnel in charge of the COVID-19 cases to jamak their prayers, for it is an important task and cannot be left because it would result in a greater harm. This is considered as a permissible excuse for them to jamak their prayers.

This is also in accordance with the Islamic legal maxim:

“Burden and difficulty bring about ease.”

To conclude, it is permissible for medical personnel who are involve as front liners in managing the COVID-19 pandemic to jamak their prayers especially in public places such as hospitals and others. This is considering the opinion of some jurists of madhhab al-Syafi’e and Hanbali which state its permissibility when a person has an excuse or important task.

However, there are guidelines for the jamak prayer that should be followed: