IRSYAD FATWA SERIES 466: THE FORMAT FOR ADHAN IN MOSQUES DURING THE COVID-19 PANDEMIC 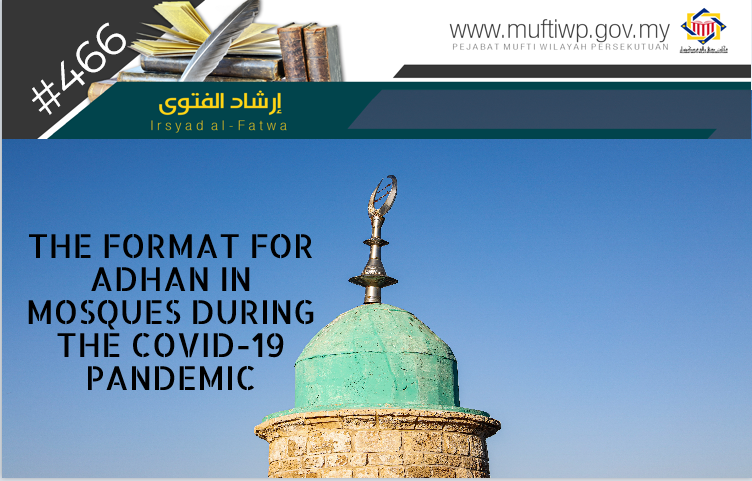 Recently, the Malaysian government has issued a restriction on movement order of which the Minister in the Prime Minister’s Office (Religious Affairs) has presented the suggestion of the adhan implementation during this period to His Majesty Yang Di-Pertuan Agong. This is following the restriction against any gathering including the congregational and Friday prayers in mosques and surau in an effort to control and stop the infection of the COVID-19 virus. The Honorable minister suggested that the adhan should be called as usual, but the recitation of hayya ‘ala al-solah is called out in a lower voice. After the call of adhan, it is suggested to the bilal to inform the people who is listening, to “pray at your own homes” in Bahasa Malaysia. Can you explain the justification to the amendment in the adhan and is it permissible to translate the adhan into another language?

The Format of Adhan When Congregational Prayer Cannot be Performed

Syafi’iyyah scholars said that if there is anything that prevented the congregational prayer from being performed in mosques, then it is sunnah for the muezzin to call the adhan with the following addition:

“Let it be known! You should pray at your own homes.”

“Pray at your own homes.”

“Pray at your own houses”

“The author of al-Uddah – who is al-Ruyani – said: If there is heavy rain during the night, or a thunderstorm where it is total darkness, then it is sunnah to say the following after the adhan – ala sollu fi rihalikum. However, if it is recited during the adhan after al-haila’ah – which is after hayya ala solah and hayya ala al-falah – is not an issue (however, it is prioritized after the adhan). This is the opinion of al-Soidalani, al-Bandaniji, al-Syasyi and other schoalrs. Imam al-Haramain dislike it to be recited during the adhan after al-haila’ah. This is the accurate way according to Sunnah. Imam al-Syafie at the end of the chapter of adhan, in the book al-Umm (): it is mentioned in al-Sahihain [al-Bukhari (616) and Muslim (699)] narrated from Ibn Abbas R.Anhuma, he told the muezzin during a stormy heavy rain: “After saying Asyhadu anna Muhammadar Rasullullah, then do not say hayya ‘ala al-solah, consequently say sollu fi buyutikum (pray at your own houses). Many contradicts this matter. Thus, Ibn Abbas said: “You think this is peculiar? This is what has been done by a person better than I am – which is the Prophet PBUH.”

This matter can be analogically deduced (qiyas) with what is happening to Malaysians today where we are tested with the spread of the COVID-19 outbreak which results in the closure of mosques and surau and the congregational prayers can no longer be performed in order to curb this deadly infection.

Is It Necessary to Change the Haila’ah in the Adhan?

Some Syafi’iyyah and scholars from other madhhabs state that the hadith should be understood in its literal sense, which means al-haila’ah is replaced with the call to pray at our own houses. This is disputed by other scholars such as Syeikh al-Islam, Imam Zakariyya al-Ansari:

“The author of al-Muhimmat said – which is al-Isnawi – This hadith shows that the statement completely replaces al-haila’ah, which contradicts what is presented by Imam al-Nawawi who said that it is to be called out after the adhan. This issue is answered by saying that the hadith means that not only hayya ‘ala al-solah in adhan is called out.”

This means that the statement of Ibn Abbas does not mean a total replacement, consequently it is a restriction of calling out the adhan without saying sollu fi rihalikum.

“The commentator – al-Haitami – stated in Syarh al-‘Ubab: the meaning of do not just say hayya ala al-solah is that the phrase should not be called out singularly, it does not mean that it should be replaced completely. Thus, it does not reject the opinion of scholars which state that it should be called after the adhan. The reason is if it is recited to replace both the haila’ah – hayya ‘ala al-solah and al-falah – or one of them is replaced then the adhan is invalid. While some scholars are inclined to take the literal meaning of the hadith to completely replace the hai’alatayn on the reasoning that both of them are a call to prayer, then how is it possible to ask people to come to prayer then asking them to pray at their own houses? Hence, this is answered by stating that both of them is not a call to pray at the place the adhan is called but a general call to perform prayer for all the listeners. This opinion is strengthened with the hadith from al-Sahihain which states that he asked the muezzin to call to prayer, then instructing them to pray at their houses.

From this discussion, indeed, al-hai’alatayn is sabit as the valid condition of the adhan according to the evidences. While the evidence which states that it should be replaced is singular and specific and has ihtimal (possibility for a commentary), thus, it is weak to reject a matter which is sabit and does not have ihtimal.”

Is It True There is A Specific Answer for Sollu fi Rihalikum?

There are no Quranic, Sunnah or ijmak evidences that cited a specific answer for sollu fi rihalikum. However, through analogical deduction (qiyas), scholars state that it is sunnah to answer it with al-haiqalah – which is la haula wala quwwata illa billah – for the qiyas with al-haila’ah. This is the opinion of Imam al-Isnawi in al-Muhimmat and this is agreed by many scholars.

This is a reasonable opinion for if sollu fi rihalikum is called in the adhan, it is recited after al-haila’ah. Wallahua’lam.

Is It Permissible to Translate the Adhan or Call It in Lowered Voice?

A question arises from the suggestion of YB Senator Minister to call for others to pray at home after the adhan. Is this considered as translating the adhan? What is the ruling of it?

We are inclined towards the opinion that it is not an issue for it is called out after the adhan. Furthermore, the translation in Bahasa Malaysia is so that people will understand the meaning of what the muezzin is trying to convey. If it is said in Arabic, then it may cause confusion for it is seldom called out and this would deny the purpose of it which is to ask people to pray at their own houses. This is closer to fiqh al-maqdisi, which is for the people to understand the shariah easily so that they can follow it. As for if it is recited during the adhan, then it is makruh (undesirable) for it contradicts the sunnah and there is concern that it could affect the valid condition of adhan where it should be called out consecutively or al-muwalah between the phrases of adhan.

Regarding the al-hai’alatayn to be called out in a lowered voice, it is just to signal that the prayers should be performed at the person’s house or where he is at, however, it is not completely replaced for it is a valid condition of adhan according to the evidences.

According to the above facts and discussion, we are inclined to the opinion that the format for the adhan during the restriction of movement order as suggested by YB Senator of Religious Affairs is reasonable and can be practised. May Allah SWT accept our deeds and forgive our sins as well as protect us from any epidemic and disasters. Amin.