IRSYAD AL-FATWA SERIES 473: ARE THOSE WHO DIED DUE TO THE COVID-19 PANDEMIC CONSIDERED AS MARTYRS? 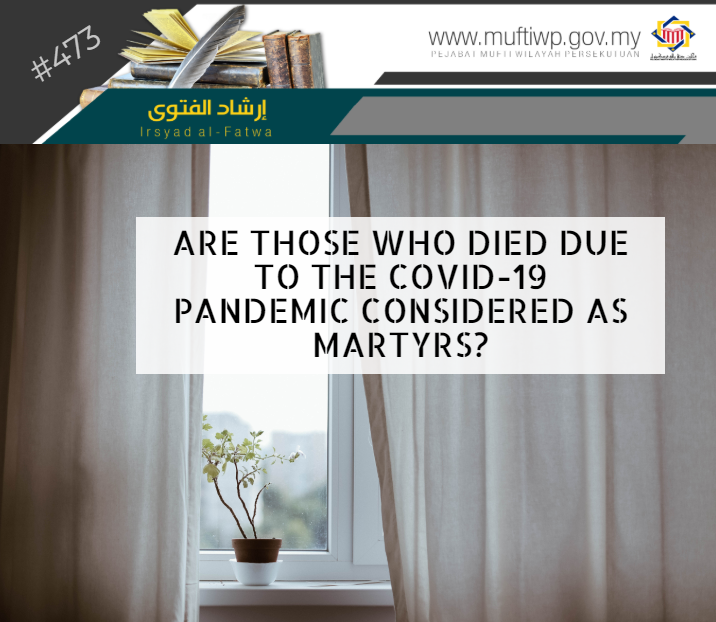 I have a question. Are the people who died because of the COVID-19 considered as martyrs? Hope for an explanation on this matter.

And do not say about those who are killed in the way of Allah, "They are dead." Rather, they are alive, but you perceive [it] not.”

The above verse is a reminder for the believers to not say those who are killed in the way of Allah SWT (defending His religion) as dead (no longer of value). For they are actually alive in a special (specific) life in their graves, however, how it is they are alive (kaifiat of them living) is unknown except by Allah SWT and you are oblivious to this. And this is the evidence that shows the existence of the blessings in the graves. (See al-Tafsir al-Muyassar, pg. 24)

Muslims Who Die Because of An Epidemic is Considered as Martyrs?

There are numerous narrations that state about this matter. Among the narrations is a narration from Abu Hurairah RA, where the Prophet PBUH said:

The same is stated in a hadith narrated by Anas bin Malik RA, the Prophet PBUH said:

"Plague is the cause of martyrdom of every Muslim (who dies because of it).”

The above hadiths clearly show that Muslims who died because of an epidemic (the plague) are considered as martyrs. The title of martyrdom is given by the Prophet PBUH himself as can be seen through the above hadiths.

Imam al-Nawawi said that all these types of death are considered as martyrdom because of the blessing of Allah SWT (for them) for the extreme pain and suffering that they experience in their death. (See al-Minhaj fi Syarh Sahih Muslim, Cet. Dar al-Siddiq, 5/550)

The Divisions of Martyrdom

Imam Ibn Hajar al-‘Asqalani stated in his book that through the above hadiths, we can divide martyrdom into two categories:

While Imam al-Nawawi added a third category of whom who died a martyr of this world and not the hereafter. (See al-Minhaj fi Syarh Sahih Muslim, Cet. Dar al-Siddiq, 5/550). Likewise, Imam Ibn Hajar al-‘Asqalani mentioned this category in his other book and explained these are the people who went to war and died (killed) in battle against the disbelievers, however, there are matters which prevent them from being considered as martyrs in the hereafter such as having the wrong intention or ran away during battle. (See Bazl Al-Ma’un, pg. 189)

Thus, we know that death due to epidemic of the plague is included as martyrdom of the hereafter and not in this world. This means they will receive the rewards of a martyr but in this world, they would still have to be bathed and prayed upon. Regarding this matter, Imam al-Nawawi said:

“Martyr meant here are all of them with the exception of those who dies in the way of Allah SWT, will receive the rewards of a martyr in the hereafter. Although in this world, they would still have to be bathed and prayed upon (unlike those who died in the battle for Allah SWT).” (See al-Minhaj fi Syarh Sahih Muslim, Cet. Dar al-Siddiq, 5/550)

Imam Ibn Hajar al-‘Asqalani stated that the rewards of a martyr for those who died because of the plague is the same as those who were killed in the way of Allah SWT. (See Bazl Al-Ma’un, pg. 196)

Regarding this matter, it is as stated by the prophet PBUH:

Is COVID-19 In the Same Category as the Plague?

In answering this issue, we will share several definitions of the plague as stated by lughah (language) scholars. Among them are:

As it is known, the COVID-19 is a virus which leads to a contagious disease that leads to huge scale death. Thus, according to its characteristics, it can be considered as the same as the plague as stated in sahih narrations

According to the above discussion, we would like to conclude that whoever dies because of the COVID-19 pandemic is considered as a martyr as understood from sahih hadiths. However, the martyr meant here is martyr of the hereafter. As for in this world, their bodies would still need to be bathed and prayed upon.

The title of a martyr is given by the Prophet PBUH himself according to sahih narrations. However, in truth, Allah SWT is the All-Knowing whether a person is really a martyr or otherwise. We should always pray that our brothers in Islam who died because of the COVID-19 pandemic is blessed as martyrs by Allah SWT.

We end with the statement of the Prophet PBUH:

“Who sought martyrdom with sincerity will be ranked by Allah among the martyrs even if he died on his bed.”

May Allah SWT remove this pandemic from our country and protect us all.