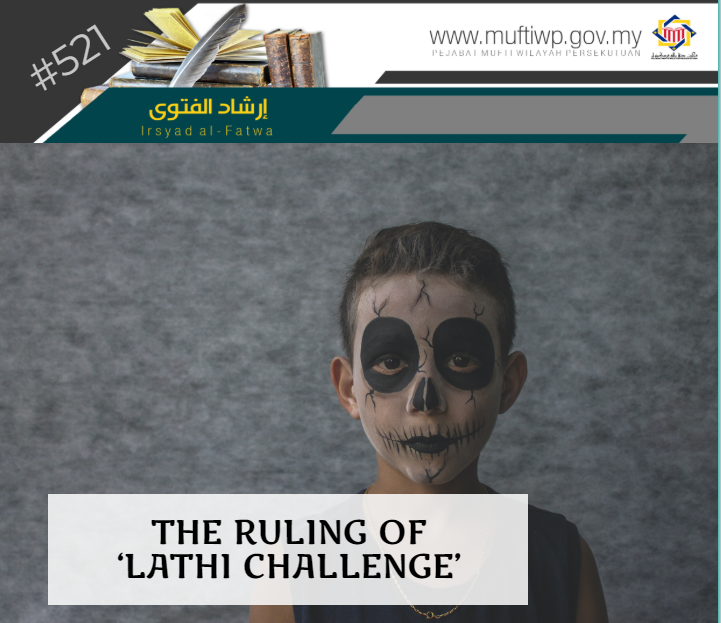 I would like to ask SS Mufti’s opinion on Lathi Challenge that has gone viral on social media recently.

Hope for an explanation from SS Mufti. Thank you.

The ruling of a person doing Lathi Challenge is haram and sinful. This is because it has elements of worship which may lead the doer to fall into shirk and kufr. Therefore, we would like to advise the public especially Muslims to not getting involved in any challenges which have elements of worship and ritual like this in order to preserve our faith.

Based on the limited information we got, Lathi Challenge primarily is popularized by Jhana Bhagwani in TikTok, which then went viral on social media when people accept the challenge. This challenge is done by the player wearing Javanese traditional clothes at first and dance to the song, then all of a sudden she changes her makeup style and clothes resembling a scary ghost.

Lathi is taken from the ancient Javanese language which means tongue. It becomes the title of a single by Weird Genius who sing in duet with Sara Fajira. In the official music video, there are elements of dancing in the theme of mystic ritual. Also, in its lyrics, there are phrases which are said may contain the element of worship of souls of the dead and spirits.

Firstly, we would like to stress out that one should stop or prevent this kind of challenges from going viral, especially when there are elements which contradict Islamic teaching. This is in accordance with a hadith from Jarir bin Abdillah where the Prophet PBUH said:

In a hadith narrated by ibn ‘Umar, the Prophet PBUH said:

He who copies any people is one of them

The scholars already commented on the above hadith as the following:

Al-Munawi and al-‘Alqamiy are of the opinion: The meaning of the hadith (resembling a nation) is by manifestly wearing their types of clothing, following their styles and trend in garments and parts of their actions. (Refer ‘Aun al-Ma’bud ‘ala Sunan Abi Dawud, 9:54)

While al-Qari is of the opinion: The meaning is whoever resembles himself as the disbelievers, for example, in clothing and other matters, or dressed as a fasiq, a fajir (indecent), a Sufi, a pious and a noble man, then he is part of them; in sinning or good deeds. (Refer ‘Aun al-Ma’bud ‘ala Sunan Abi Dawud, 9:54)

Based on the mentioned characteristics above, dances with elements of worships and rituals which contradict the Islamic teachings as well as clothing and makeups resembling Satan or ghost-like in Lathi Challenge is included under the meaning of tasyabbuh (resemblance) which is prohibited in the hadith. Therefore, the ruling of a person doing Lathi Challenge is haram and sinful.

We would like to advise the public to stop making it viral by stop sharing these videos on social media accounts and not getting involved in any challenges that have elements of worships and rituals like this in order to preserve our faith.