IRSYAD AL-FATWA SERIES 544: THE RULING OF A STREAMER GENERATING INCOME THROUGH LIVE STREAMING 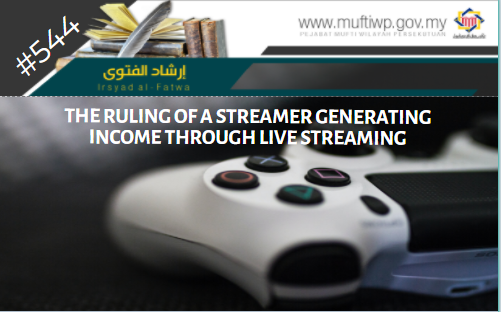 Assalamualaikum. What is the ruling of a streamer generating income through live streaming of him playing PUBG on Facebook? Especially for those who did it full-time. Hope for an explanation from SS Datuk Mufti.

Originally, entertainment is permitted in Islam unless there are other elements that change the permissibility towards haram. This is as a hadith narrated by Hanzalah RA where the Prophet PBUH said:

Hanzala, there is a time for worldly affairs and a time for (worship and devotion), and if your state of mind is always the same as it is at the time of remembrance of Allah, the Angels would shake hands with you and would greet you on the path by saying: As-Salamu-Alaikum.

Originally, the ruling of playing PUBG is permissible if one plays within a reasonable amount of time. However, we are inclined to say that it is makruh to play PUBG if it is played excessively because there are elements of wasting time, in fact, its ruling may become haram if the player exceeds boundaries set by shara’ as well as abandoning his obligations as a Muslim like prayer, refuses and raises one’s voice to his parents as he refuses to stop the game and etc.

For further information on the ruling of playing PUBG, kindly refer to our article in https://muftiwp.gov.my/artikel/bayan-linnas/3992-bayan-linnas-siri-220-pubg-pandangan-dari-sudut-syarak-syarak.

Overview of the Issue and Problem

Specifically on the ruling of generating income through live streaming in Facebook. Firstly, we should understand the common practice of a streamer.

Among the famous medium which becomes the streamers’ pit of generating money is through Twitch, Facebook Gaming and YouTube Gaming. We will focus our discussion towards Facebook Gaming.

The method of generating money from Facebook Gaming is through contributions given by the streamer’s fans. The contribution is given in the form of star icons which are bought by the fans in package form with price set by the FB team; for example (100 stars = RM6).

For each star bought and given, the streamer will acquire 0.01$ USD which is approximately RM0.40, while the remainder is credited to the FB team. [1] However, the FB team puts several conditions needed to be fulfilled before the streamer is eligible to get the stars, among them are: [2]

Looking at the above stated conditions, generating income through live streaming is not something easy as one should undergo several processes which require a long period of time starting from the process of qualifying oneself to involve in the FB monetary gaining by fulfilling four conditions above. The above process is only a prerequisite to qualify a streamer to gain any income.

However, to gain income continuously, a streamer shall undergo the next processes which are by getting as much donations (stars donation) and subscribers by any means like promoting his gaming talent and continuous interaction with the audience and fans who watch the live streaming.

Therefore, it is a common practice of the streamers to do live streaming for hours around 4-8 hours per day. The period of time possibly become much longer if the streamer made it his full-time job. [3]

The Evaluation of Shara’ Rulings

Basically, different situations will sometimes produce different rulings. This is aligned with the general maxim which states,

And do not pursue that of which you have no knowledge. Indeed, the hearing, the sight and the heart - about all those [one] will be questioned.

Sheikh Sa’di in his tafsir when explaining this verse states that it commands the Muslims to do thorough and non-hasty analyzation as well as research in deciding a ruling. (See: Tafsir al-Karim al-Rahman, pg 532)

Based on the above mechanism and explanation, we view that the ruling of generating income through live streaming is permissible.

We bring upon some arguments and reasons:

This is in accordance with the Fiqh maxim which states,

However, we would like to advise all steamers to have balance between the time for gaming and other commandments as a Muslim, a son/ daughter, a friend, as well as a father so that we do not ignore other matters especially observing five daily prayers, responsibilities towards the family, maintaining good health, observing boundaries in communicating, covering the awrah and etc.

Failure to analyze and to take care of other aspects may change the status of permissibility towards makruh or even haram like abandoning prayers, speaking ill, revealing awrah intentionally to attract audience and other matters prohibited by shara’.

Imam al-Zakasyi Rhm (794h) concluded that the permissibility changes depending on circumstances. Sometimes, it changes to wajib if leaving such action causes harm. Sometimes it becomes haram if doing that action may cause other obligations set by shara’ is abandoned, and it may change according to other taklifi rulings like Sunnah and makruh. (Refer: al-Bahru al-Muhith, 1/365)

At the same time, it is advised for the streamers to take the chance to make the medium of gaming as a place to spread da’wah and call the audience as well as fans to do good wherever they are. Besides, it may become a medium for the streamers to remind other PUBG players to be wise in dividing their time and to not abandon other duties and responsibilities.

Lastly, da’wah is not limited to reality context only, but across virtual world including gaming. This is to answer the call of Prophet Muhammad PBUH in a famous hadith narrated by Abdullah bin Amru RA:

Convey from me even an Ayah of the Qur'an

May the above explanation able to untangle all confusions and make us a mu’min who is more creative and productive while never disregard the matters of halal and haram in our daily life especially on matters related to muamalat.