IRSYAD AL-FATWA SERIES 208 : THE RULING OF A WOMAN SETTING UP HER OWN COMPANY 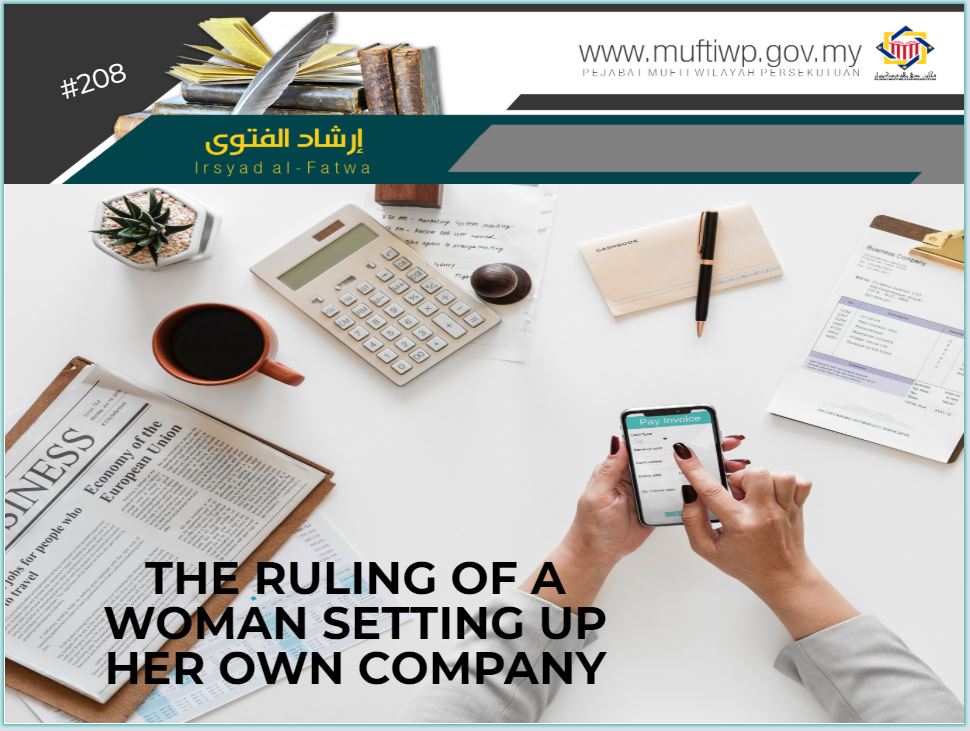 What is the ruling for a woman to set up her own company?

Islam honours women and puts them at a high standing without neglecting their rights and importance. Furthermore, Islam emphasizes the honour of women in everything they do. Due to this, Islam sanctions marriage, division of assets, divorce and others, in ensuring the rights of women are protected and they are not abused.

Regarding the question asked, here we include evidences that are referred to in the ruling of the permissibility for woman to work, although the best place for them is at her house, as stated by Allah SWT:

“And abide in your houses and do not display yourselves as [was] the display of the former times of ignorance.”

Syeikh Mustafa al-Maraghi said, this verse is a restriction towards women to go out of their houses without any need, reason or purpose. See Tafsir al-Maraghi (6/22). According to Syeikh al-Sya’rawi, this is the manners for women, for generally her duty is to manage her household, and she would not have time to go out (without a reason). See Tafsir al-Sya’rawi (19/12021). Ibnu Kathir when commenting on this verse said, a woman should not go out of her house unless she has a reason or a need to do so, for example, to pray at a mosque while fulfilling the conditions set by Islam. See Tafsir Al-Qur’an al-‘Azim (6/182).

The above verse means that the place for a woman is at her house and she is not allowed to leave it as she likes without a need or a reason. However, a woman is allowed to work to fulfil her needs.

In the Quran, there are a lot of verses that encourage us to work for our worldly needs. These verses are for everyone and they did not specify it to be just for men. Among the verses of the Quran that explains this is:

“And say, "Do [as you will], for Allah will see your deeds, and [so, will] His Messenger and the believers.”

“And when he came to the well of Madyan, he found there a crowd of people watering [their flocks], and he found aside from them two women driving back [their flocks]. He said, "What is your circumstance?" They said, "We do not water until the shepherds dispatch [their flocks]; and our father is an old man."

“One who has the longest hands amongst you would meet me most immediately. She farther said: They (the wives of Allah's Apostle) used to measure the hands as to whose hand was the longest and it was the hand of Zainab that was the longest amongst them, as she used to work with her hand and Spend (that income) on charity.”

Imam al-Nawawi comments on this hadith saying, this shows Zainab binti Jahsh holds a significant place, because of her effort and work, she managed to have her own income that she spends for charity. Thus, we understand that the Prophet PBUH appreciates her efforts in easing the burden of the poor people. (See al-Minhaj Syarh Sahih Muslim, 8/16)

Moreover, another narration states that women are allowed to go out for her needs. Generally, an occupation is a need for everyone, whether it is a man or a woman.

“You (women) are allowed to go out to fulfil your needs.”

“If the wife of any one of you asks permission (to go to the mosque) do not forbid her.”

“The work of a man that is of his own efforts and every trade is blessed.”

Even though the word used is a man, it is actually a general term that also includes woman. Al-San’ani said: “The work of a man of his efforts, also includes to woman.” (See Subul al-Salam, 2/3).

The choice of setting up her own company is very similar to a woman entering the workforce. Thus, we state a few fatwas from individuals and fatwa institutions stating the permissibility of women working while abiding the conditions set by syarak:

Guidelines for Women Setting Up Her Own Company

We hold the opinion that it is permissible for a woman to set up her own company. Sometimes it can also be ruled as an obligation when she really needs to do it. For example, if she is divorced, and there is no one that could support her financially and she could do this as an effort to provide for herself without begging for help from someone else. At the same time, with the present economic situation, sometimes it is a huge responsibility for a husband to work to support his family needs, and if she wished to help her husband, it is permissible for her to do so. Among the guidelines that she has to abide by are: