IRSYAD AL-FATWA SERIES 207 : THE RULING OF A SURGEON PERFORMING JAMA’ FOR HIS PRAYERS 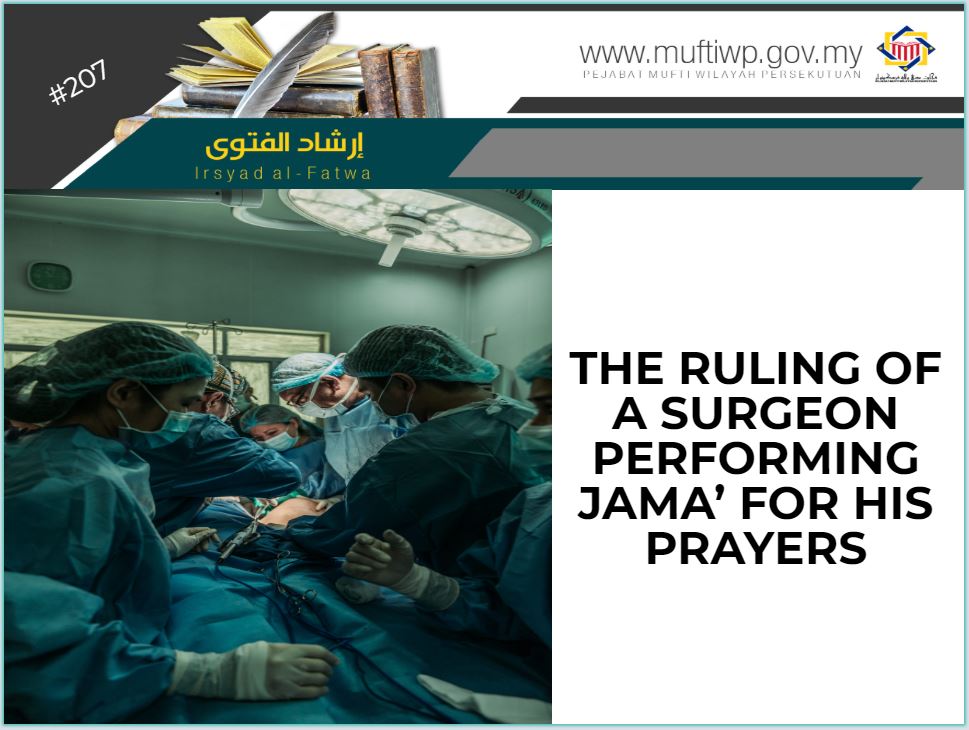 What is the ruling for a surgeon to join his obligatory prayers (jama’) to treat patients or if he oversees an operation?

The original ruling to perform the obligatory prayer is for it to be performed during its specified time. This is referring to the statement of Allah SWT:

“And establish prayer at the two ends of the day and at the approach of the night. Indeed, good deeds do away with misdeeds. That is a reminder for those who remember.”

Early Scholars’ Opinions Regarding Jama’ Prayer Due to Illness and Sickness

The conclusive opinion in mazhab al-Syafie states that jama’ can only be done when one is travelling, when it rains heavily and on the Day of Arafah. As for the sick or ill, they are not allowed to perform jama’ for their prayer. Their reason is that a sickness or illness is something that is uncertain, whereas the time for prayer is already set and clearly stated in the Quranic and prophetic evidences. However, Imam al-Nawawi and a few scholars of mazhab al-Syafie, such as al-Qadhi Hussein, Ibn Suraij, al-Ruyani, al-Mawardi, al-Darimi and al-Mutawalli support the opinion that states its permissibility. Refer Taqrirat al-Sadidah – Qism al-‘Ibadat (pg. 322)

“Regarding (jama’ when) sick, there is a clear and strong opinion (al-Khattabi) and Yahya al-Nawawi.”

These scholars support the opinion in Imam Ahmad bin Hanbal’s mazhab that permits jama’ if there is an illness or masyaqqah (difficulty). Imam Ibn Qudamah states in al-Mughni (2/205-206):

“It is not permissible to perform jama’ for other than what we have stated (such as travel, muddy soil, strong wind, rain and illness). Ibn Syubrumah said: It is permissible if there is a need or a necessity, as long as it is not made into routine, according to a hadith by Ibn Abbas where the Prophet PBUH performed jama’ for Zuhur and Asar, Maghrib and Isya’, without the reason of fear or rain. Ibn Abbas are asked why the Prophet did that? He answered because the Prophet PBUH does not want to burden his ummah. In our opinion (mazhab Ahmad and majority of scholars), the ruling is taken from the general syarak that set the time of prayer. In our opinion the hadith by Ibn Abbas is applicable for illness or sickness, and it is permissible to take this rukhsah (facilitation) for people that are in difficulties such as mothers that nurse their children, or a frail old man, and people that faced hardships such as these two group of people that could not leave jama’. The hadith also may mean (perform jama’ without a reason) that the first prayer is performed late without missing the prayer time and the second prayer is performed early during the prayer’s time. Amr bin Dinar narrated the hadith from Jabir bin Zaid from Ibn Abbas. Amr asked Jabir: “O Abu al-Sya’tha! My opinion is that the Prophet PBUH performed the Zuhur late, and the Asar early, and performed the Maghrib late and the Isya’ early”. Jabir answered: Me too.”

The Opinion of Contemporary Scholars

Some contemporary scholars had included surgeons that are treating or are in charge of hours-long surgeries on patients to be eligible for rukhsah of joining prayers.

“He can jama’ the Zuhur and Asar prayer, Maghrib and Isya’ prayer, whether taqdim or ta’khir, according to what is easier for him. These prayers are performed in jama’ without Asar, according to mazhab Imam Ahmad that permits jama’ due to sickness referring to the hadith of Ibn Abbas in al-Sahih.”

“It is permissible for a patient to jama’ his prayer if it is difficult for him to pray at the specified times. The same goes for a mother that is nursing her child while she experienced bleeding (istihadah) to avoid the difficulty of purifying herself for every prayer time. It is also applicable to people experiencing incontinence. It is permissible to jama’ the prayer for people that are unable to determine the beginning of prayer times, such as those who live underneath the surface of the earth, such as miners, and people that fear harm to his life, property or dignity, or harm to his living if he does not perform jama’. Furthermore, it is also a facilitation to those that it would be impossible for them to leave their work to perform prayer at the specified times.” Refer Fatawa Dar al-Ifta` al-Misriyyah (9/55)

“Doctors that are in charge of surgeries should pray at the specified times for prayer. However, it is permissible in desperate situations to perform jama’ taqdim or ta’khir, such as Zuhur and Asar, and Maghrib and Isya’, when there are desperate situations. As for prayers that cannot be performed in jama’, such as Asar and Maghrib, and Subuh and Zuhur, if possible, they must be performed at the specified times even if he has to be replaced with another doctor or staff in rotation and that is best. However, if it is not possible, then it is permissible to perform the prayer late or replace the prayer (qadha) after the surgery is over. This is due to a fact that there is a facilitation in desperate situations.”

The Muzakarah of the 54th Malaysian Council for Islamic Religious Affairs (MKI) Fatwa Committee on the 23rd of January 2003 had discussed the issue of Muslim Workers in Factories Who Cannot Perform the Obligatory Prayers. Muzakarah has decided that:

Also, the 49th MKI Muzakarah meeting held on 19th September 2000 discussed the Issue of Performing Jama’ Prayers for People Suffering from Chronic Disease and Undergoing Treatment at Government / Private Hospitals and decided that patients who are undergoing long-term chronic treatments such as hemodialysis for kidney disease are permitted to join their prayers.

“Hardships bring about the facilitation in a ruling.”

However, this facilitation is bound by the following dhawabit or principles:

Hence, it is permissible for a doctor to follow the rulings stated by scholars that ruled it permissible to perform jama’ for prayers if someone is faced with difficulties or hardships.