IRSYAD AL-FATWA SERIES 206: IT IS RULED NUSYUZ IF MOTHER IN LAW LEAVE WITH HER DAUGHTER WITHOUT THE PERMISSION OF THE HUSBAND 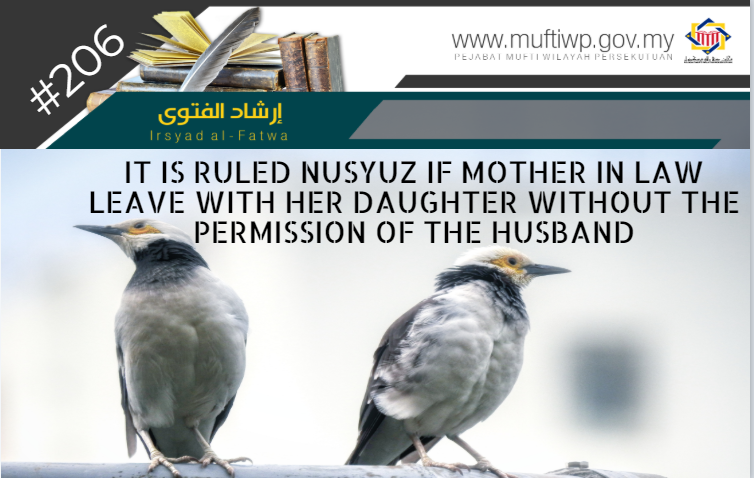 What is the ruling for a mother in law to leave with her daughter back to the mother in law’s house, when the husband did not give his permission, because they had a small fight?

It is originally ruled as prohibited for a wife to leave her husband’s house without the husband’s permission. The wife is considered as nusyuz and she has committed a great sin.

Nusyuz literally means committing sin or transgression. It comes from the root word nasyz and nasyaz that means a high standing.

Meanwhile, according to syarak, it usually falls to woman. A woman that is considered nusyuz is a wife that disobeys her husband and raised herself from what has been commanded and obligated to her by Allah SWT.

The Ruling and Evidences Related to Nusyuz

Nusyuz is ruled prohibited and it is a great sin.

“But those [wives] from whom you fear arrogance –”

"If a woman spends the night deserting her husband's bed (does not sleep with him), then the angels send their curses on her till she comes back (to her husband).”

"If a man Invites his wife to sleep with him and she refuses to come to him, then the angels send their curses on her till morning."

“By Him in Whose Hand is my life, when a man calls his wife to his bed, and she does not respond, the One Who is in the heaven is displeased with her until he (her husband) is pleased with her.”

Nusyuz is a ruling for both a wife and a husband. If one of them neglects their responsibilities, then they are considered nusyuz:

It is an improper action for the mother in law to leave with her daughter back to her house without the permission from the daughter’s husband. However, husband and wife should be wise in handling these types of situations with patience and they should take the right course of action until the situation is resolved.

The right action for the wife to take is to not leave her husband’s house with her mother, even if her parents asked her to. However, the ruling would change if the husband is committing a crime towards his wife, such as threatening the life of his wife or hurt his wife. Then the mother in law’s action is to save her daughter from harm.

May this explanation benefit the questioner. We pray that Allah SWT blessed this family.