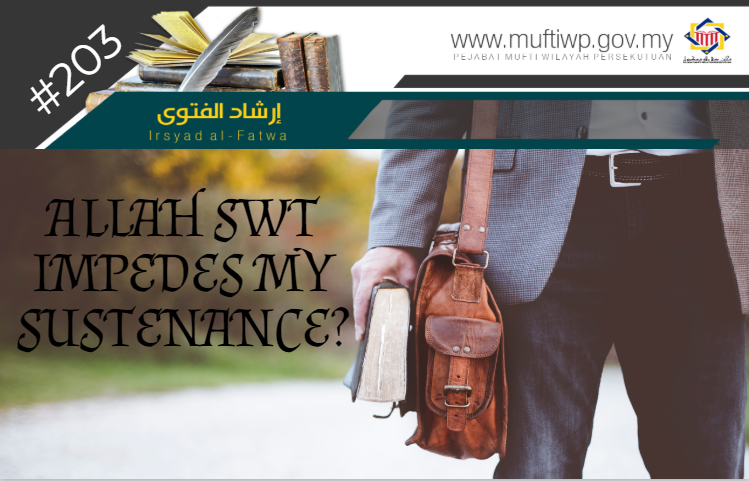 Assalamualaikum ustaz. I want to ask a question. For your information, I’ve been unemployed for the last two years after I finished my studies. I have sent dozens of resumes to numerous companies. Unfortunately, none would employ me. Even if I was invited for an interview, I failed all my interviews. I relate my experience to my friend and he said maybe I did a mistake that results in the impediment of my sustenance by Allah SWT. I have given up and I don’t know what to do. Is the explanation given by my friend true? Is it true that Allah SWT would impede the sustenance of people that make mistakes? I hope ustaz can answer my questions.

Committing sins towards Allah SWT is one of the reasons that the sustenance of someone is impeded. Allah SWT states:

“And whatever strikes you of disaster - it is for what your hands have earned; but He pardons much.”

In Tafsir al-Jalalayn (pg.643), the word “كَسَبَتْ” means sins that they committed. In other words, sins that we committed are the very reason of the disaster that befall us. However, if he did not commit sins, then the disaster is a test from Allah SWT to raise his standing in the hereafter (if they are patient).

Meanwhile, Imam Ibn Kathir states in his commentaries, the disaster is a replacement of the punishment that he would otherwise face in the hereafter, thus Allah SWT forgives him and penalizes him before he dies. Refer Tafsir al-Quran al-Azhim(7/207).

He also includes a statement of the Prophet PBUH:

"By Him in Whose Hand my soul is! No fatigue, nor disease, nor sorrow, nor sadness, nor hurt, nor distress befalls a Muslim, even if it were the prick he receives from a thorn, but that Allah expiates some of his sins for that." Hadith muttafaqun alaih.

When viewed from one angle, there is some truth in your friend’s statement. Accordingly, we must repent immediately, increase our worship and apologize to anyone whom we may have wronged before.

However, if we have already repented but we still experience hardship in terms of sustenance, it may not be the result of sins. Maybe it’s because the concept of sustenance and its division are misunderstood.

This is a type of sustenance that are fixed and set by Allah SWT without any effort by humans. For some people, even if he puts in a little of effort, he receives great sustenance from Allah SWT. Or even when he does not put any effort at all. Allah SWT states:

“Say, "Indeed, my Lord extends provision for whom He wills and restricts [it], but most of the people do not know."

Hence, there are some that are born in a rich family and some who are born in a poor family. The same with people born in an average income family. For those born rich, their sustenance is a test for them, whether or not they are grateful for what they have. Thus, Allah SWT critics the rich who are ungrateful and stingy.

“And Allah has favored some of you over others in provision. But those who were favored would not hand over their provision to those whom their right hands possess so they would be equal to them therein. Then is it the favor of Allah they reject?”

For the poor, Allah SWT critics them too, if they are disappointed and blames Allah SWT for their life:

“But when He tries him and restricts his provision, he says, "My Lord has humiliated me."

The above verses are a clear answer as to the issues of sustenance that we cannot change as it has been fixed by Allah SWT. Sometimes, the rich would be in need of the poor to work for them and vice versa. Allah SWT states:

“Do they distribute the mercy of your Lord? It is We who have apportioned among them their livelihood in the life of this world and have raised some of them above others in degrees [of rank] that they may make use of one another for service. But the mercy of your Lord is better than whatever they accumulate.”

Furthermore, if everyone is rich, then it will destabilize the society we live in. Allah SWT states:

“And if Allah had extended [excessively] provision for His servants, they would have committed tyranny throughout the earth. But He sends [it] down in an amount which He wills. Indeed, He is of His servants, Acquainted and Seeing.”

Other than the fixed sustenance by Allah SWT with minimum or no effort, the second type of sustenance requires our efforts. Allah SWT states:

“And it is He who subjected the sea for you to eat from it tender meat and to extract from it ornaments which you wear. And you see the ships plowing through it, and [He subjected it] that you may seek of His bounty; and perhaps you will be grateful.”

We may think that our sustenance is impeded, but in reality, our efforts and strategies in acquiring our sustenance are insufficient. Reflect on Allah SWT’s words when He states, ‘that you may seek of His bounty’.

Thus, we have to seek sustenance through all channels that are permissible and not limit it to a certain method or strategy. Maybe our sustenance is not through employment but through setting up our own business or maybe it’s the opposite. The important point here is, we have to put in our best effort and strategize, which also includes discussions and asking of other people’s opinions and suggestions based on their experiences, then be determined and rely and put your trust in Allah SWT (tawakal).

“And when you have decided, then rely upon Allah. Indeed, Allah loves those who rely [upon Him].”

As a Muslim, we have to believe in the qadha and qadar of Allah SWT, and we are obligated to accept whatever it is that Allah SWT has fixed for us. We should always be grateful for everything that He has given us and at the same time work hard to polish our skills and potential. Everyone possess their own unique ability and skills, and it is our job to identify our own capabilities. InsyaAllah we will be successful. Looking from the worldly perspective, there are numerous millionaires that had a tough life and were unemployed, but with hard work and perseverance, they turn their lives around and now they employ hundreds of workers.

Let’s reflect on the hadith from Saidina Umar al-Khattab, where the Prophet PBUH said:

"If you were to rely upon Allah with the required reliance, then He would provide for you just as a bird is provided for, it goes out in the morning empty, and returns full."