IRSYAD FATWA SERIES 200: PURIFICATION PROCESS FOR HANDPHONES THAT COME IN CONTACT WITH NAJIS 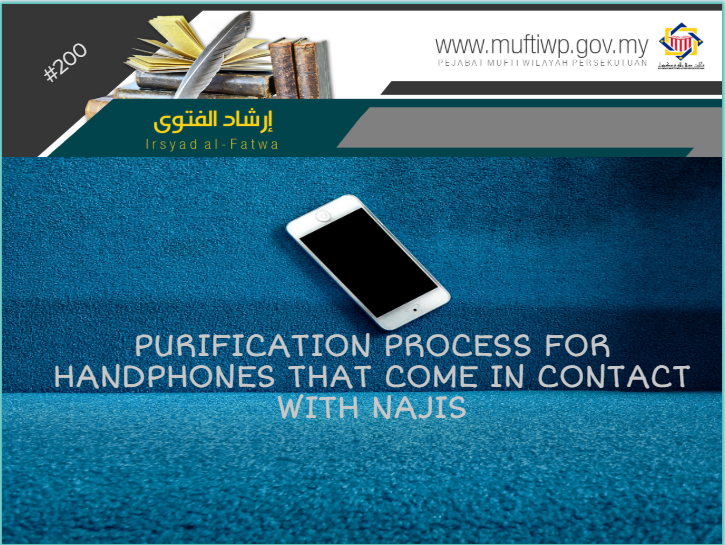 Salam Dr, what is the purification process for handphones that come in contact with najis, for handphones are devices that will be damaged if washed with water. Is it enough to spray or spritz some water and then wiping it to purify it?

Scholars’ Opinion on the Purification Process of Polished Metal

The issue of purifying handphone that falls on najis (liquid or fluid form) is a new issue that needs to be addressed. The most similar case that we found from fiqh books is the purification of polished materials, such as swords and mirrors by wiping. Here, we include scholars’ opinion regarding the issue:

Imam al-Nawawi Rahimahullah states: “If najis comes in contact with something that is polished, such as a sword, knife, mirror or the like, it cannot be purified by wiping and the only process of purification is by washing them just like other materials. This is also the opinion of Ahmad and Daud, while Malik and Abu Hanifah states that it can be purified by wiping.” Refer al-Majmu` (2/599)

Imam al-Zailaie Rahimahulah (Hanafiyyah jurist) explains: “The ruling for a sword made from polished metal is the same as for mirror and knife. If it becomes mutanajjis, it can be purified by wiping. This is in accordance to an incident that happened to the companions of the Prophet PBUH, where they killed the disbelievers (those who fight in wars) with their swords, then wipe their swords and prayed with them. The reason being, washing swords or mirrors made from metal or other similar material (with water) will damage it (rust and others). Thus, in this case, there is a necessity for it.” Refer Tabyin al-Haqa’iq (1/72)

The Ruling for Handphones That Come in Contact with Najis

Hence, the second opinion commands that the area that come in contact with najis is cleaned carefully without damaging the handphone and wiped with a cloth or others to remove the ‘ain (essence) of the najis, but it cannot be washed, to prevent from damaging it, with a cloth until it dries and then, it can be brought in prayer.

However, the first opinion states that the handphone can still be used but cannot be brought in prayer. Thus, the handphone should be placed at a different place or near to the place he wants to pray without coming into contact with his body when he is praying.

We are inclined towards the first opinion for it is in accordance with the opinion from mazhab al-Syafie. However, there are a few options and methods to be considered.

First, if the handphone falls in a place of najis, for example inside a toilet bowl, then quickly wash the outer part of the handphone. The reason is each handphones has different water resistance. There are even handphones that are completely waterproof. If there is any liquid residue that comes out of the sockets of the phone, that does not have the characteristics of najis (smell, color, feel), then it is considered pure. If the residue has the characteristics of najis, then it is impure. This is due to the certainty of the part that come in contact with najis is the outer part of the phone, while the inside depends on the built of the phone.

This is in accordance to the permissibility but makruh ruling for using the utensils used by non-Muslims who are not concern about cleanliness or purification, or it is a norm form them to use najis, for example the Zoroastrians (majus – people who worship fire) who use cow’s urine to wash their containers. The reason is the original ruling for the container (it is pure), precedes the ruling of the norm, which is just an assumption. Refer al-Iqna’ (pg. 49) by Imam al-Khatib al-Syirbini Rahimahullah.

The same goes for the ruling of carrying a baby while praying. The prayer is valid if there is no physical characteristics of najis on the baby’s clothing when carrying the baby. This is in spite of the norm for a baby, for a baby is unable to take care of himself from najis because he is not mumayyiz, and the ruling falls back to the original ruling, of what is observed on the baby when praying.

Imam al-Syafie Rahimahullah said: “Every clothing that is not known who is the weaver, whether he is a Muslim, disbeliever, idolater, Zoroastrian, the people of the book, or the clothing is worn by one of them, or worn by a baby, thus it is pure until the impurity (najis) is proven. The same applies to a clothing of a baby, for the Prophet PBUH once carried Umamah binti Abi al-As while he prays, when she was a baby wearing baby clothes (which usually is impure, for a baby wears a diaper).” Refer al-Umm (1/72)

Imam al-Syirazi Rahimahullah said: “Thus, if someone prays carrying a live creature that is pure, then his prayer is valid, for the Prophet PBUH once carried Umamah bin Abi al-As while he prays. This is due to the najis in the living creature is ruled as the same as najis inside the body of the person praying.”

Imam al-Nawawi explains: “If someone prays carrying a pure living creature, and najis is not observed on it, then his prayer is valid.” Refer al-Majmu` (3/150)

The same is applied in the recommendation made by the Prophet PBUH that states it is sunnah to sprinkle water on the trousers or clothing worn after istinja’ to prevent the feelings of doubt or uncertainty, thus the water is considered as the water sprinkled and not urine. From al-Hakam bin Sufyan (or Sufyan bin al-Hakam):

“I saw the Messenger of Allah PBUH urinate, and he sprinkled water on the private parts of his body.”

Imam al-Nawawi said: “It is sunnah to take a palm full of water and sprinkle on the private part and the inner part of pants or clothing after intinja’ to prevent was-was (uncertainty or doubts) that is stated by al-Ruyani and others. There is a sahih hadith that states the sunnah of this act.” Refer al-Majmu` (2/112)

Furthermore, there is another hadith that states the Prophet PBUH asked a woman to purify herself after menstruation with scented musk to remove the smell of blood. From Aisyah R.Anha, the Prophet PBUH said:

"Purify yourself with a piece of cloth scented with musk."

Second, if it is certain that the mutanajjis water has penetrated inside the phone, then it should be dried first (under the sun or using a hairdryer or other methods), after switching the phone off. Then, carefully sprinkle some water on the parts that has najis to purify it. The best course of action to take is consulting with the phone’s expert for help.

May Allah SWT give us a deep understanding and knowledge in religion.