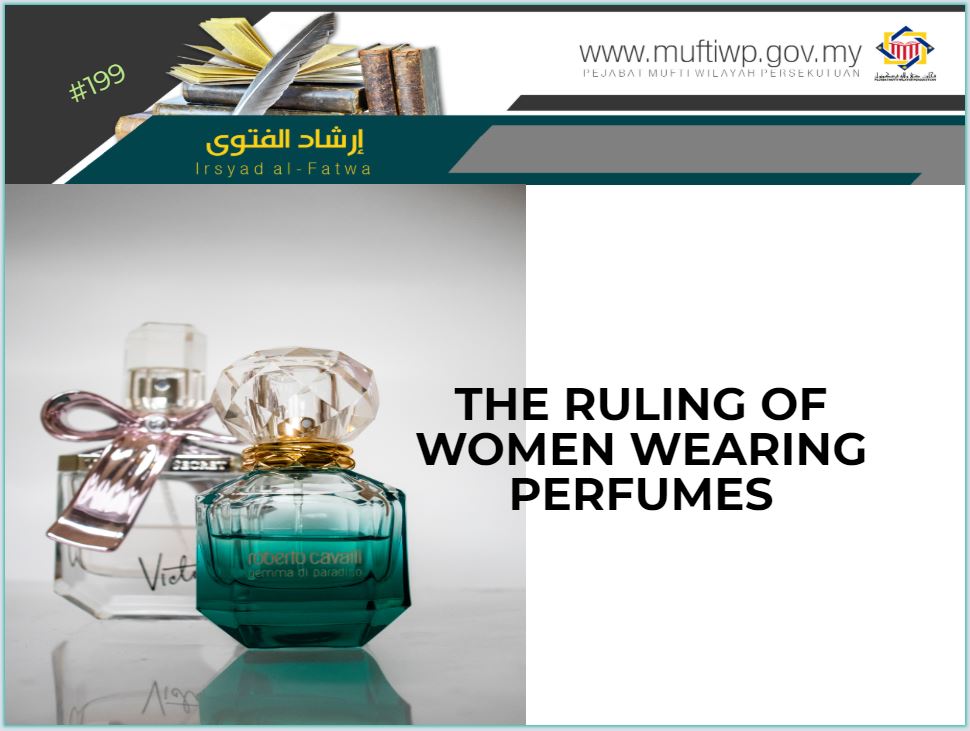 What is the ruling for a woman that wears perfume, then went out to work or to shop in markets and others?

There is a hadith that explains this issue. The hadith is from Abu Musa al-Asy’ari RA where the Prophet PBUH said:

“Any woman who puts on perfume then passes by people so that they can smell her fragrance then she is an adulteress.”

Al-Imam al-Munawi said that this hadith refers to women that purposely puts on strong-smelling perfume and went out of her house passing places where ajnabi men are present, thus, they would have committed a sin comparable to the sin of adultery. (See Faydh al-Qadir, 3/147)

“And for a woman that puts on perfume then passed an event (where there are men), and it (the smell from the perfume) aroused them and drive them to look at the woman, hence all the eyes that looks at her has committed adultery. As for the woman, she has committed a sin, for she attracts the hearts of men to look at her. Thus, this is considered as an adultery (of the eyes) and she is considered as an adulterer.” (See Faydh al-Qadir, 5/27)

It was narrated in another hadith where Abu Hurairah RA met a woman who was wearing perfume and heading for the mosque. He said: “O slave woman of the Compeller, where are you headed?” She said: “To the mosque.” He said: “And have you put on perfume for that?” She said: “Yes.” He said: “I heard the Messenger of Allah (ﷺ) say:

‘Any woman who puts on perfume then goes out to the mosque, no prayer will be accepted from her until she takes a bath.’”

There are also a few athar from the companions that emphasized this issue. One incident happened during the rule of Saidina Umar al-Khattab RA, when a woman went out of her house wearing perfume and Saidina Umar smelled the scent of her perfume, then Saidina Umar hit the woman with his walking staff and said:

“You women went out of your houses wearing perfumes that men can smell their scent?! Indeed, the hearts of men are attracted to the scent that he smells. Don’t wear perfume when you go out of your house.”

When looking at the above hadiths and narrations, it is clear that women are prohibited from wearing perfumes. However, the perfumes meant in these hadiths are perfumes that have an apparent and strong scent, hence, attracting the eyes of ajnabi men. This could arouse their hearts and could lead to a more shameful act.

If this is the situation, this act is prohibited and according to al-Imam Ibn Hajar al-Haithami it is considered as a great sin, even if the woman has the approval of her husband to wear such perfumes. (See al-Zawajir, 2/71)

However, putting a little bit of scent to prevent body odour by using deodorant, talcum powder, soap and others is not included in the hadith of the Prophet PBUH stated before.

This is in accordance with another hadith where the Prophet PBUH said:

Al-Hasan said that the hadith may mean that a woman’s perfume when she is out from her house is like the perfume of za’faran where its colour is apparent, and its scent hidden. However, when she is with her husband (alone), then she can put any perfume that her husband likes.

The same is stated by al-Imam Badruddin al-‘Aini Rahimahullah:

“And the best of fragrance for woman is for its colour and not at its scent, for the colour is an adornment for them, while if the scent is spread (strong scent and can be smelled) then there may come harm to her, or it could lead to fitnah.” (See Nukhabu al-Afkar fi Tanqih Mabani al-Akhbar, 9/97)

In our opinion, it is permissible for woman to put a little bit of perfume that is not apparent in its scent. This is to maintain her appearance when she is out from her house. It is also permissible to wear powder, deodorant, soap and others.

Avoid wearing fragrances that have a strong smell that could attract the attention of other ajnabi men that could lead to sins. This is what have been stated in the above stated hadiths, that equates women wearing strong perfumes to the adulterers. Wallahua’lam.