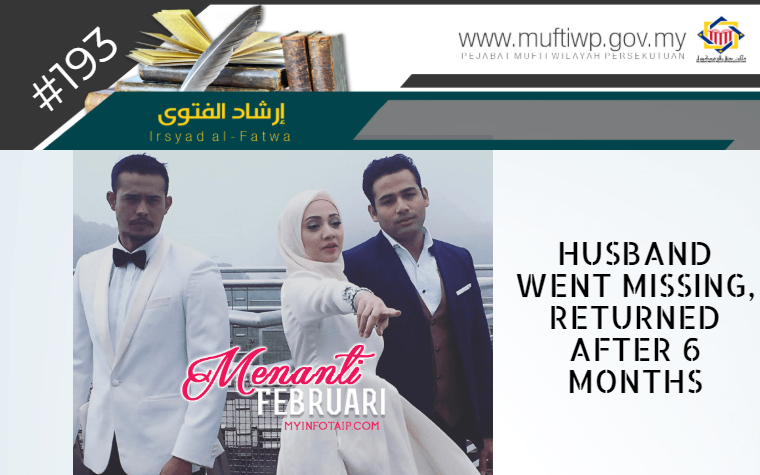 In the drama ‘Menanti Februari (Waiting for February)’, the husband went missing at sea for six months. The wife marries another guy during that time. One day, the husband returned home, finding his wife is married to his best friend. What is the ruling of the marriage?

The word al-mafqud originates from Arabic language from the root word fa qa da which means lost, missing and disappear [1].

The contemporary scholars from mazhab Syafie states mafqud as: “A person missing from his place of residence for a long time with no news and it is unknown whether he is alive or dead.” [4]

The Duration of Mafqud in Mazhab

There are no clear Quranic or prophetic evidences that set certain durations for mafqud before a person is presumed dead (legal presumption of death/declared dead in absentia).

“For the wife of a missing person, she will be considered as his wife until a clear evidence come proving otherwise.”

Before we explain the duration for mafqud according to mazhab Syafie and other mazhab and legislation system in Malaysia, first let us explain about the following situations:

The strong opinion among the scholars of al-Syafie is that the duration must be determined by the judge for the case. However, there are also opinions stating the duration for mafqud as 68 years, 70 years, 80 years, 100 years and 120 years. [6]

In mazhab Hanafi, a missing person is presumed dead when all the people that lived in the same time of life as him are all dead. However, scholars of mazhab Hanafi did not set a certain age for someone to be declared as dead.

For Imam Abu Hanifah, he declared death for a missing person if the missing person has reached 120 years old and this opinion is supported by al-Qadwari. Abu Yusuf set the age as 100 years old, and there are some scholars that state the age depends on the ijtihad of the judge, taking into consideration the condition of the missing person and the evidences presented to him.

According to mazhab Maliki, if a person went missing in Muslim countries, he can be declared dead after the waiting for a duration of 4 years. Furthermore, his wife has to complete her ‘iddah of 4 months and 10 days for the death of her husband before she can marry another man.

If he went missing in other countries (other than Muslim countries), then he cannot be presumed as dead before valid evidences are presented to the court or if he has reached an age where it will be impossible for anyone to be alive at the age. Imam Malik and Ibn Qasim state the age is around the age of 80 years old, while Ibn Arafah said it to be around 75 years old. There are also scholars that hold the opinion that it is the same as a person who went missing in Muslim countries.

If a person went missing during a war against the non-Muslims, Imam Malik and Ibn Qasim’s opinion states that the wife has to wait for a year before completing her ‘iddah. There are also opinions in mazhab Maliki that ruled it the same as someone who went missing in countries other than Muslim countries.

If a person went missing in a war between Muslims, then there are differing opinions in this mazhab, some state that the wife has to wait a year before completing her ‘iddah, while others state that it depends on the ijtihad of the judge or the ruler.

According to scholars of mazhab Hanbali, there are two opinions for someone who went missing but his departure is generally considered as safe:

If a person went missing and his departure is considered as dangerous, then the wife has to wait 4 years before she starts her ‘iddah for the death of her husband. [9] To determine the general duration of mafqud, it depends on the ijtihad of the judge, according to the time he went missing for a long time and that there are no longer people that are of the same age as him that are still alive. [10]

The Duration of Mafqud According to the Syariah Law in Malaysia

When the question is whether a person is alive or dead, and it is evident that no news has been heard about it for four years by the person who should have heard of it if he is alive, then the burden of proving that he is still alive switched to the person affirming it.

This provision is reinforced by section 53 (1) of the Islamic Family Law (Federal Territories) Act 1984 (Act 303) stating that:

The Statement of Mufti Wilayah Persekutuan

After discussing the opinions of Islamic scholars, we are inclined towards the opinion that states that the duration for mafqud depends on the decision and consideration of the judge. This is in line with a strong opinion in mazhab al-Syafie. Furthermore, it corresponds to the act stipulated in Malaysia through the Syariah Court. Which means, if the judge decides that the duration is 4 years or more, then the wife has to wait, and it is permissible for her to remarry after completing her ‘iddah. Thus, after 6 months – as an example – there is an evidence that proves her husband has died, then the wife can straight away start her ‘iddah and after its completion, she can remarry.

If the husband returned after the duration of mafqud ended, he has a right to choose to remarry his wife or accept the returning of the mahar given before (consenting to his wife’s new husband). This is in accordance with a statement by Saidina Umar and Saidina Uthman:

When the husband returned (after the duration of mafqud ended), then the husband can choose to take his wife back or accept the return of his wife’s mahar.

Regarding the issue of the drama ‘Menanti Februari’ (Waiting for February), if the husband went missing at sea (in Malaysia for example), then the duration for mafqud depends on the decision of the judge after consulting with Malaysian Maritime Enforcement Agency, the Prime Minister's Department who are responsible for carrying out maritime search and rescue duty at the Maritime Zone of Malaysia and in the deep seas.

Hence our opinion are as follows:

Husband and wife should know the basis in religion, and if they don’t, they should ask the people who are experts in Islamic family law. Our advice to Malaysian film and drama directors, is that the views of the authorities such as the Islamic Development Department (JAKIM) should be taken seriously in order to uphold the industry as syariah-compliant industries. Drama and film are an excellent medium to spread Islamic understanding and noble values across any religious boundaries. May Allah give us good understanding of religion and protect us and our families from anything that destroys the marriage institution.