IRSYAD FATWA SERIES 189: THE RULING OF CONSULTING WITH ISLAMIC HEALERS AND ASKING FOR HELP FROM JINN 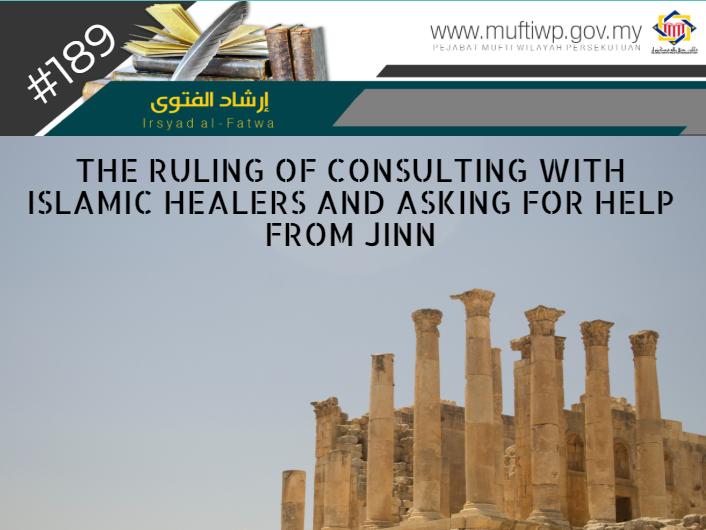 What is the ruling of consulting with “Islamic healers” and the ruling for asking for help from the jinn?

“In truth, ruqyah is permissible for anyone that has a good recitation, understand the meaning, hold on to the correct aqidah, perform good deeds and has a good character. It is not a prerequisite for him to learn the knowledge of furu’ (branch) religious issues or has a deep understanding of it. This is in accordance with the incident where Abu Said recite al-Fatihah as ruqyah for a person who was lost and stung by a poisonous animal. He said: We did not know (al-Fatihah) is a ruqyah verse. As stated by a hadith by al-Bukhari and Muslim. Furthermore, he must have good intentions and the purpose is to benefit other Muslims and not for monetary gains.” See al-Lu’lu al-Makin (22).

“The scholars have agreed on the permissibility of treatment if it follows these three conditions:

“However, treating a patient that is possessed by jinn using ruqyah and seeking protection from Allah SWT has to follow these two rules:

In Majmu’ al-Fatawa (19/13), Syeikhul Islam Ibn Taimiyyah also wrote: “Thus, the Islamic scholars prohibit any treatment where the meanings are not understood, for it could be the reason for a person to fall into shirk even without him realizing it.”

“Ruqyah that should be avoided are ruqyah from the practices of disbelievers, treatment with unknown words or phrases, and treatment using a language other than Arabic, where its meanings are not understood. All of these is prohibited, for there is a possibility that it contains disbelief and anything that leads to disbelief or the undesirable.

According to the above scholars’ opinions, it can be concluded that consulting with Islamic healer is permissible if the ruqyah used in his treatment fulfils the conditions mentioned above and does not contradict the conditions and principles of ruqyah treatment as an alternative treatment in Islam.

The second issue is regarding the ruling of asking for help from the jinn.

Syeikh Dr Wahbah al-Zuhaili was asked: “Is it permissible to ask help from Muslim jinn? And what is the ruling if Muslims ask the service from Muslim jinn? What is the ruling of asking for help from jinn in general?” Syeikh then answered: “It is prohibited to ask the help of jinn in any type of circumstances. It is a reprehensible act in syara’. This is in accordance with a statement of Allah SWT:

“And there were men from mankind who sought refuge in men from the jinn, so they [only] increased them in burden.”

Lajnah Daimah (a fatwa institution) issued the following fatwa when asked by a man about the ruling of asking help from jinn:

“It is prohibited for him to ask help from jinn and Muslims are prohibited to seek his help in treating any illness or other requests through the help of jinn. Treatments by doctors using the medication are permissible and are safe from any form of sorcery. In a hadith from the Prophet PBUH, he said: "He who goes to one who claims on matters of the Unseen and believes in him, his Salat (prayers) will not be accepted for forty days. In another narration, the Prophet PBUH said: “Whoever went to shamans or fortune tellers and believe what was told to them. Indeed, he has transgressed what has been revealed to the Prophet Muhammad PBUH. This man and his friends are among the jinn (includes shamans and fortune tellers), thus none should seek his help and he is not to be trusted.”

According to the scholars’ opinion above, we are inclined towards the opinion that prohibits asking help from jinn.

By this explanation, may Allah SWT give us understanding and His protection from anything that is harmful to us. Amin.