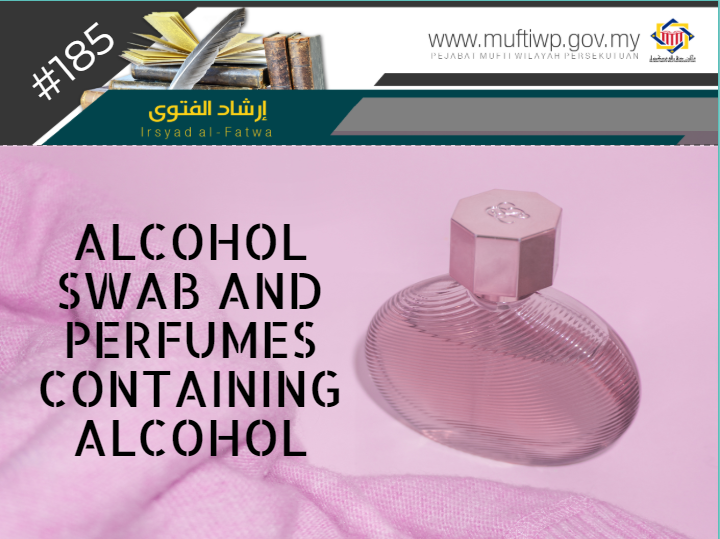 Is the alcohol in perfumes considered as najis and cannot be brought in prayer? How about patients that use alcohol swab for medical treatment or cupping?

According to the 4th edition of Kamus Dewan, alcohol is defined as: “1. Flammable liquid and an intoxicant (found in alcoholic beverages); 2. Alcoholic beverages, contains alcohol: do not drink this beverage ~ or carbonated; avoid treating wounds or scratches with this mixture ~.”

Islamic scholars have two opinions regarding this issue:

The scholars from mazhab Syafie view alcohol as najis (impure), for it is included as intoxicating substance. This is stated in Fiqh al-Manhaji (1/183-184):

“First: Alcoholic beverage and any intoxicating substance. This is in accordance with a statement of Allah SWT:

O you who have believed, indeed, intoxicants, gambling, [sacrificing on] stone alters [to other than Allah], and divining arrows are but defilement from the work of Satan, so avoid it that you may be successful.

This is the final opinion in mazhab Maliki, Hanafi and Hanbali. Refer al-Mausu`ah al-Fiqhiyyah al-Kuwaitiyyah (40/93-94).

In their opinion, it is prohibited to drink alcoholic beverages but the alcoholic beverage itself is not najis. They refer to the action of the companions of the Prophet PBUH that spill and break the containers of alcoholic beverages when it is declared prohibited, and the beverages flow on the roads of Medina (Refer to Sahih al-Bukhari no. 2464). If it is najis, then surely the companions wouldn’t do such a thing for there is a prohibition of throwing najis and urinate in the streets. They respond to the istidlal for the impurity (najis) of alcoholic beverages according to verse 90 surah al-Maidah, saying that it refers to the hukmiyyah or maknawi (in term of meaning) and not to its essence or ain. In other words, arrows used for foretelling, idols made from dirt and tools used for gambling are not physically considered as najis. Maknawi najis is stated in the Quran:

“Indeed, the polytheists are unclean,”

Here, the unclean (نَجَسٌ) refers to their belief and not their physical body. Thus, the term rijs in this verse is not qat’I (definite).

This is the opinion of Rabi`ah Syeikh to Imam Malik, al-Laith bin Saad, al-Muzani a friend and student of Imam al-Syafie and contemporary scholars, such as al-Syaukani in Nail al-Autar, al-San’ani and Syeikh Muhammad Rashid Ridha, and Syeikh Atiyyah Saqr.

The Fatwa of Brunei Government's Mufti Year 2005 (p. 74) also states: "It is prohibited to drink synthetic alcohols made from a mixture of chemicals because of its harmful and poisonous nature. As for cosmetics that contain alcohol produced synthetically or artificially from chemical mixtures, it is permissible, as it is not considered as najis. Furthermore, the prayer of someone that wears clothing that has been sprayed with the perfume that contains alcohol produced synthetically or artificial alcohol produced from chemical mixtures is valid for it is not considered as najis."

Similarly, the 7th Muzakarah of the Fatwa Committee of National Council for Islamic Religious Affairs Malaysia met on 11th -12th April 1984 discussed Alcohol According to Islamic View. The Muzakarah has decided that:

In our opinion, it is best if we avoid using alcohol in our daily lives, to stay away from the khilaf of the scholars. We should avoid syubhah matters, especially when we are uncertain as to the source of the alcohol used in perfumes, whether they are from the process of making alcoholic beverages or not. The Prophet PBUH said:

Thus, we should choose other alternatives that its purity and permissibility is certain. However, if there is a necessity, then the guidelines set in Muzakarah of the Fatwa Committee of National Council for Islamic Religious Affairs Malaysia stated above can be followed. May Allah SWT bless our lives.