IRSYAD AL-FATWA SERIES 179: THE RULING OF BEING NAKED ALONE 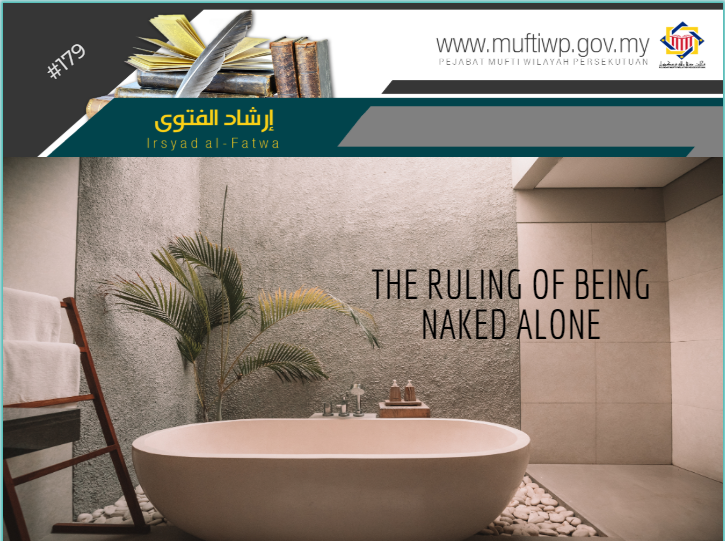 I hope to get an explanation regarding bathing naked.

For a man, his aurah when he is alone is his private parts (penis and rectum), while the aurah for a woman when she is alone is between the navel and knees. Even when someone is alone, it is prohibited for him to be naked unless if there is a reason or necessity.

“Just as it is an obligation to cover the aurah from the view of other people, it is also an obligation to cover the aurah when someone is alone. The scholars of mazhab Hanafi, Syafie and Hanbali ruled it obligatory to cover the aurah when someone is alone. While according to mazhab Maliki: ‘It is sunnah to cover one’s aurah when he is alone, for the covering is encouraged for someone to be shy in front of Allah SWT and His angels.’ Whereas, other scholars that ruled it obligatory said: ‘Indeed, it is obligatory to cover the aurah (even when he is alone) since the commandment to cover the aurah is absolute, and for the fact that Allah SWT is the most deserving for someone to be shy towards, as has been stated in a narration from Bahz bin Hakim, "My father narrated to me from my grandfather, who said: 'I said: "O Messenger of Allah! Regarding our 'Awrah, what of it must we cover and what of it may we leave?" He said: "Protect your 'Awrah except from your wife or what your right hand possesses."' He said: "What about a man with another man?" He said: "If you are able to not let anyone see it, then do so." I said: "What about a man when he is alone?" He said: "Allah is most deserving of being shy from Him.’”

“The (people of) Bani Israel used to take bath naked (all together) looking at each other. The Prophet (ﷺ) Moses used to take a bath alone. They said, 'By Allah! Nothing prevents Moses from taking a bath with us except that he has a scrotal hernia.' So once Moses went out to take a bath and put his clothes over a stone and then that stone ran away with his clothes. Moses followed that stone saying, "My clothes, O stone! My clothes, O stone! till the people of Bani Israel saw him and said, 'By Allah, Moses has got no defect in his body. Moses took his clothes and began to beat the stone." Abu Huraira added, "By Allah! There are still six or seven marks present on the stone from that excessive beating.”

“Bani Israel took their bath naked while looking at each other, disobeying the Prophet Moses sunnah for he takes his bath in a place where no one could see him. Since it is obligatory for them to follow his sunnah, their actions are considered as an act of disobedience. Even if their actions of bathing naked is known and acknowledged by the Prophet Moses, it is not obligatory for us to follow it, for it is an obligation for us is to cover our aurah from other people. While covering (aurah) when someone is alone is a good deed, it is not an obligation.”

The Prophet Job AS Takes His Bath Bare-skinned

"When the Prophet (ﷺ) Job (Aiyub) was taking his bath naked, golden locusts began to fall on him. Job started collecting them in his clothes. His Lord addressed him, 'O Job! Haven't I given you enough so that you are not in need of them.' Job replied, 'Yes!' By Your Honor (power)! But I cannot dispense with Your Blessings.' "

“The hadith regarding the Prophet Moses AS and the Prophet Job AS are evidences of the permissibility of being naked for the purpose of a bath or others, if he cannot be seen by anyone because both prophets are among the people we are commanded to emulate.” See Syarah Sahih al-Bukhari by ibn al-Batthal.

The permissibility is according to the syarak of the people before us (بشرع من قبلنا).

“As a conclusion, the ruling for someone taking a bath without a single thread on his body (naked) if he is hidden and cannot be seen by anyone prohibited from seeing his aurah, then it is permissible for him. However, it is prioritized for him to cover his aurah, being shy in the presence of Allah SWT. If he takes a bath and he can be seen by others, then it is prohibited for him and it is obligated for him to cover his aurah according to the consensus of the scholars and the narration of the Prophet PBUH.” See Mirqaat al-Mafatih Syarah li Misykaat al-Masabiih, vol 2, pg. 368.

Among the manners of taking a bath without any clothes on, the jurists advise the following:

“Whoever take a bath without clothes (naked), then it is sunnah to recite, ‘In the name of Allah, there is none deserving to be worshipped except Him’ for it can protect him from the eyes of shaytan and jinn.” This is stated by al-Dimyathi in I`anah al-Talibin, vol 1, pg. 97.

According to the above discussion, it is clear that exposing the aurah when someone is alone is: