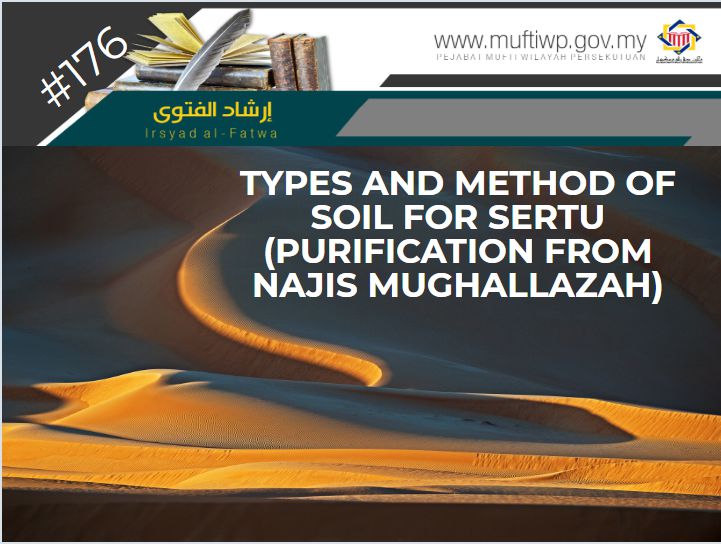 What is the method and types of soil that can be used for sertu?

Narrations Regarding the Process of Sertu (Purification from Najis Mughallazah) of Containers that Have Been Licked by a Dog.

Sertu is a process of purification of najis mughallazah, such as najis from dogs (licked).

"Wash the vessel the dog has drunk from seven times: the first or the last of them with dirt.”

"If a dog licks the vessel of any one of you, let him wash it seven times, one of the washing with dust."

"If a dog licks the vessel of any one of you, let him wash it seven times, one of the washing with soil."

In the hadeeth, there is a narrator named al-Jarud and his nickname is Ibn Abu Yazid. He is one of the narrators that are considered matruk (narrations from them are rejected) (Refer: Sunan al-Daruquthni, 107/1)

In Sunan al-Daraqutni, the narration contains the term “إِحْدَاهُنَّ” and the sanad (chain of narrators) for this hadith is dhaif (weak) for the sanad includes al-Jarud bin Yazid. Thus, this hadith is classified as matruk (a hadith is considered matruk when one of its narrators is accused of telling lies or making heresies, whether or not in this specific hadith he told a lie.). (See Nail al-Awthar, 55/1)

Al-Hafiz states in al-Fath, narrations using the term “أُولَاهُنَّ” are stronger in terms of الأكثرية (number) and الأحفظية (preserved). Furthermore, the meaning of the hadith shows that if the last washing is with soil, then one more wash is needed to complete the purification and cleansing.

Some said that the narration by al-Tirmidhi in which the first and the last washings both are with soil is either really are the words transmitted or maybe come from the doubt coming from the narrators themselves. Hence, the desposition of this issue is to use the narration of “أُولَاهُنَّ” since it is stronger and more accepted. However, if the narration using term “أُخْرَاهُنَّ” is proven with connected valid chain of narrators, this shows that there is takhyir (choice) in this hadeeth.

The Definition of Turab “التراب” (Soil)

However, Kamus Dewan defines soil as the outermost layer of the earth.

In Arabic, the terms used for soil are al-Turab “التراب” or al-Thin “الطين”. Among the Quranic and prophetic evidences that uses these terms are:

“And of His signs is that He created you from dust; then, suddenly you were human beings dispersing [throughout the earth].”

“And people are all the children of Adam, and Adam was [created] from dust."

We are also commanded to perform tayammum (to replace wudhu’/ablution) when there is no water available, this is stated in the Quran:

“And find no water, then seek clean earth and wipe over your faces and your hands [with it]”

“and it will become a smooth, dusty ground”

Which refers to a smooth pure soil. It is also recorded in the hadeeth narrated in Sahih Muslim. Hudzaifah al-Yaman said that the Prophet PBUH said:

Therefore, they specialised the purification with the soil as a glory. If the true meaning is other than the soil, the saying must be “together with the soil”. (Refer: Tafsir Ibn Kathir, 280/2)

A man came to `Umar bin Al-Khattab and said, "I became Junub but no water was available." `Ammar bin Yasir said to `Umar, "Do you remember that you and I (became Junub while both of us) were together on a journey and you didn't pray but I rolled myself on the ground and prayed? I informed the Prophet (ﷺ) about it and he said, 'It would have been sufficient for you to do like this.' The Prophet then stroked lightly the earth with his hands and then blew off the dust and passed his hands over his face and hands."

"I rolled myself in the dust and came to the Prophet (ﷺ) who said, 'Passing dusted hands over the face and the backs of the hands is sufficient for you.' "

Based on these two mentioned hadeeth, we can understand that soil meant in this hadeeth is the outer layer of earth. This is because, the Prophet PBUH did not ask his companions to dig the land to get the soil for purifying themselves. Besides, looking on the doing of Ammar bin Yasir, it is clear that he rolled at the surface of the earth, and the Prophet PBUH never said that the dust used by him is impure.

Al-Malikiyyah scholars hold the opinion that washing seven times is ta’abbudiyy, for their opinion is that the water licked by a dog is pure. [1] However, the majority of Islamic scholars of al-Hanafiyyah, al-Syafi’eyyah and al-Hanabilah hold the opinion that the ta’abbud is just for the seven times and not for the practise of purification, for it is mu’allal (with reason). Thus, water that is licked by a dog is najis.

First: It is obligatory to wash seven times, and this is the opinion in mazhab Malik, mazhab Syafie and mazhab Ahmad. They refer to the hadith from Abu Hurairah RA, as stated at the beginning of this discussion.

Second: It is not obligatory to wash seven times, and this is according to the opinion of mazhab Abu Hanifah. This is due to the fact that dog’s saliva is the same as other najis, and it enough to wash with a single washing to purify the najis. However, the washing for seven times is mustahab and not obligatory. They refer to a fatwa that was once issued by Abu Hurairah RA, he stated that it is enough to wash three times to purify the najis of dog’s saliva, in narrations by Imam al-Thalawi and al-Daraquthni. This shows that the seven times washing is abrogated.

There are several explanations for the second opinion:

The Ruling of Tatrib (using soil) When Purifying Dog’s Najis

First: al-Syafi’eyyah scholars hold the opinion that it is obligatory to wash using soil mixed with water to purify najis from dogs and swine and what is born from them. They use istidlal to state this opinion, referring to the hadith from Abu Hurairah RA, the Prophet PBUH said:

Second: Meanwhile, mazhab Imam Ahmad states that it is permissible to use other than soil in the process of sertu, such as using soap or others. Refer Al-Mughni, Ibn Qudamah (1/74).

Third: As for scholars of al-Hanafiyyah and al-Malikiyyah, they hold the opinion that it is not obligatory to purify using soil for this matter (dog and swine). See Mausu’ah al-Fiqhiyyah al-Kuwaitiyyah (114/3).

According to the above discussion, in our opinion there are differing opinions by Islamic scholars regarding the usage of soil in the purification process of mughallazah najis, only scholars from mazhab Syafie and Hanafi obligates the usage of soil. Those that obligates the usage of soil agreed that all types of soft soil, whether it is from the surface of the earth or underneath the earth’s surface are permissible to be used. Thus, it is permissible to use soil that are defined as soil or clay by geologists. Furthermore, our religion’s basis is to make it easy and denies takalluf (تكلف), which means burdening oneself in worship.

Lastly, may Allah SWT bless us and give us understanding in practising our religion. Amin.