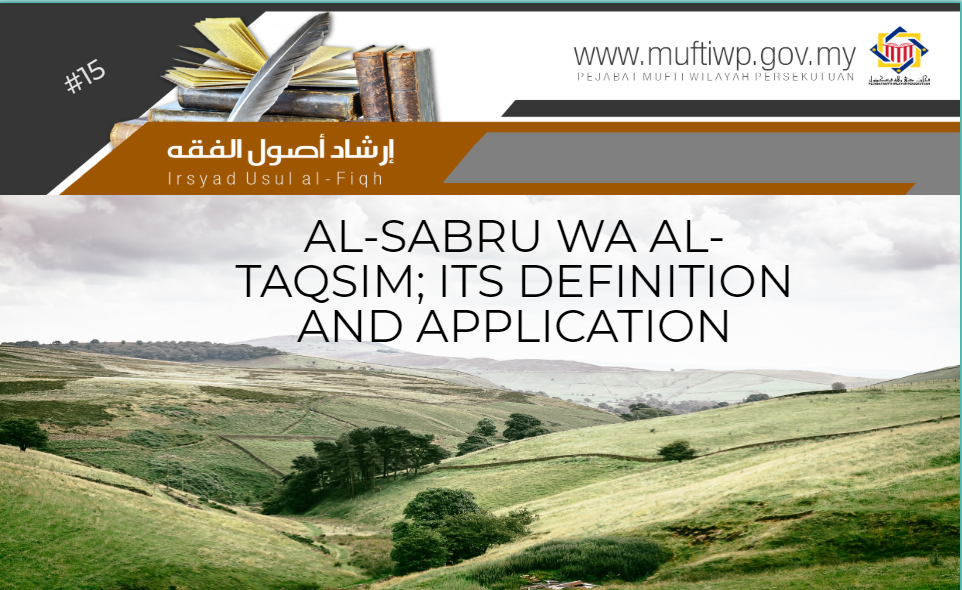 Under the topic of al-Qiyas, there is a chapter known as masaalik al-‘illah. To put it into words, this is the ways or methods used to identify illah (legal reason) for particular ruling. Among the most renown methods are through al-Nas, al-Ijma’ and al-Sabr wa al-Taqsim. If the illah for a certain ruling is not stated directly in the excerpts of Al-Quran and Hadith as well as ijma’, then a mujtahid shall use the method of al-sabr wa al-taqsim in identifying it. Hence, in this series, we would like to explain this by focusing on the third masalik al-illah (methods of identifying the ‘illah), which is al-sabru wa al-taqsim.

Technically, al-Imam Ibn al-Najjar Rahimahullah stated in defining al-Sabru wa al-Taqsim: Limiting the topographies of the original issue which is analogically deduced (qiyas) to a new issue as well as ruling out criteria which are not related. Refer: Syarah al-Kaukab al-Munir, Ibn al-Najjar (pg. 516).

In other words, Al-Sabru wa al-Taqsim means: A mujtahid rules out some criteria he found unrelated and unfit to be the illah for a particular ruling. Then he does an observation, test as well as research to withdraw some criteria which he feels unfit to remain.

Here, we include some examples of the application of al-Sabru wa al-Taqsim in the process of identifying the illah for a particular ruling:

First: Illah for the Prohibition of Intoxicants

The nas (Qura’nic and prophetic evidence) clearly shows that the ruling for intoxicants is haram. This is in accordance with the saying of Allah SWT in the Quran:

O you who have believed, indeed, intoxicants, gambling, [sacrificing on] stone alters [to other than Allah], and divining arrows are but defilement from the work of Satan, so avoid it that you may be successful

Based on this verse, the ruling for intoxicants is clearly haram (prohibited) because there is an imperative clause commanding to leave the act.

Some scholars state that the ‘illah for prohibition of intoxicants is the intoxication itself. Their saying is based on what is stated in the prophetic tradition:

The above hadith clearly states the evidence of prohibition of intoxicants as well as its ‘illah is intoxication. However, this narration did not reach to some scholars, where they did not know about it. In fact, even if it was narrated to them, it may be invalid (not sahih) according to them. Hence, they use this method of al-Sabru wa al-Taqsim in identifying the most accurate ‘illah for the prohibition of intoxicants.

By using the method of al-Sabru wa al-Taqsim, a mujtahid may gather criteria which may be the reasons for the prohibition. The examples are as follows:

The process of filtering and dividing these criteria is named as al-Taqsim. Then, a mujtahid runs an inspection and analyzation as well as ruling out criteria which seem unfit to be the ‘illah and keeping only one reasonable criterion to be identified as ‘illah for the hukm. This process is named as al-Sabru.

Second: The Authority (Wilayah) of a Father to Marry Off His Daughter Without her Permission

Verily, the nas (Quranic and prophetic evidences) have already stated that the wilayah (authority) of a father to marry off his daughter who are young virgins. However, the ‘illah for this ruling is not stated neither in the nas, nor by ijma’. Hence, a mujtahid has to analyze the nas and limiting ‘illah to one of these two criteria; virginity or due to being young.

However, it is undeniable that the analyzation of the mujtahids may differs between one another in applying this method of al-Sabru wa al-Taqsim. A mujtahid may consider it as a reasonable criterion to be the ‘illah. While, other mujtahid may see it conversely.

On the last series, we already explain in detail regarding the method of Tanqih al-Manath. Briefly, it is a process to filter ‘illah from some seemingly related criteria and elements, but are not considered as the ‘illah.

To close, as this process of al-Sabru wa al-Taqsim is a method to identify the ‘illah for particular ruling. So, it is a method that should be mastered perfectly by a mujtahid. It is because, there are indeed more contemporary issues nowadays which are in need of inference from the rulings. More often than not, the cases have never taken place before. Therefore, it is important to identify the ‘illah to make it easier to apply the Qiyas towards these contemporary issues. May Allah give us clear understanding regarding this issue. Ameen.