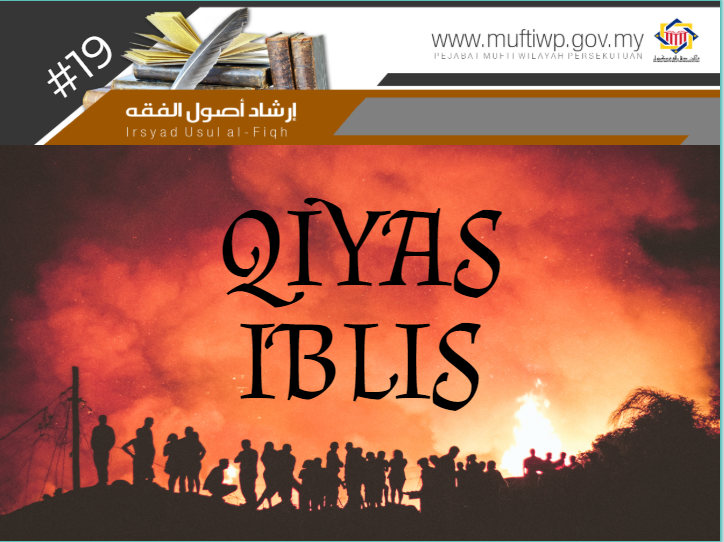 Assalamualaikum Ustaz, what is meant by qiyas iblis?

In the discussion of qiyas as a source in the rulings as agreed by scholars, there is a famous saying of “Qiyas Iblis”. This is in accordance with an athar from Ibn Abbas R.Anhuma, where he said: “The first creature that apply the concept of qiyas is Iblis, then he made a mistake in his qiyas. Then, whoever that uses qiyas in religious matters only depending on logics, Allah SWT will make him be with Iblis.”

The above statement is also stated by Imam al-Hassan al-Basri and Imam Muhammad bin Sirin. The reason is, there is a statement made by Iblis himself in the Quran, when Allah SWT commanded him to prostrate himself to the Prophet Adam AS through the following verse:

[Allah] said, "What prevented you from prostrating when I commanded you?" [Satan] said, "I am better than him. You created me from fire and created him from clay."

According to the above verse, Iblis gave a justification for his refusal to prostrate himself to the Prophet Adam AS, even though the commandment is from Allah SWT using the qiyas of asl al-khilqah (the origin of creation).

This means, through qiyas of the origin of creation where he is created from fire and the Prophet Adam AS is created from clay, Iblis tries to justifies his refusal. Since Iblis concluded that fire is better than clay. Iblis’s statement means if the origin of something is honoured, then the furu’ (branch) of it is also honoured. Thus, through his qiyas, Iblis tried to logically explains his refusal to prostrate himself to Prophet Adam AS.

So true is the statement of Ibn Abbas R.Anhuma that said qiyas iblis is a mistake and misconception. The reason is, there is no accurate fact or evidences that supported the claim that fire is better than clay. Consequently, there are several arguments that prove clay is better and superior than fire.

The following, we state the superiority of clay compared to fire:

However, for fire, its attributes are rough, proud and disorganized. Thus, Iblis has the attributes of arrogance and conceited.

Iblis’s statement or qiyas iblis are also refuted with the following arguments:

For example: The Prophet Noah is honoured but it does not automatically honour his son who is a disbeliever and deny the teachings of Prophet Noah AS.

The same goes for illegitimate child from adultery should not be degraded and insulted.

Thus, the above arguments prove that qiyas iblis is a fasid (wrong) qiyas and false.

To conclude, the following are the meanings of qiyas iblis:

First: Qiyas iblis is any qiyas that contradicts the Quranic and prophetic evidences.

Second: Any qiyas that leads to the contradiction of Islamic rulings and commandments of Allah SWT is considered as qiyas iblis. Those who are involved in qiyas such as these are considered as the followers of Iblis.

Thus, the Islamic jurists only use qiyas which do not contradict the evidences, do not lead to the rulings of Allah SWT, and follows the criteria agreed by scholars. This is the true and accepted qiyas. May Allah SWT give us true understanding in religion. Ameen.