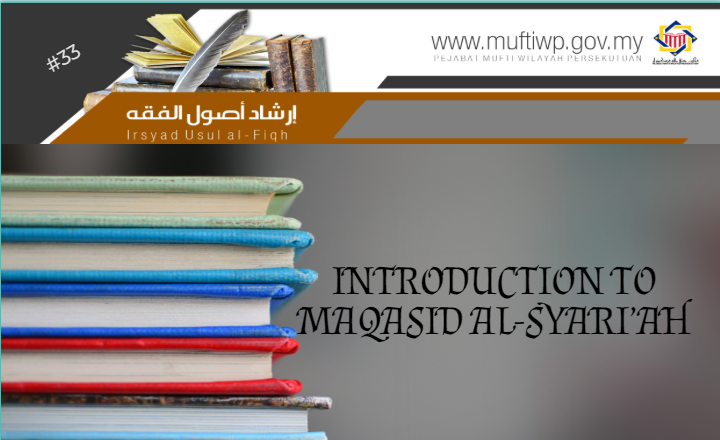 In this period of time which is defined by Dr. Ahmad ar-Raysouni as the rise of the Maqasid (as-Sohwah al-Maqasidiyyah), results in the knowledge of Maqasid Syariah being discussed upon widely by the scholars, politicians and the lawmakers, as well as finding its way into the discussions of the public. This expansion is surely a positive one and is welcomed by knowledge lovers.

Based on this, we take the initiative to write on ‘Maqasid al-Syari’ah’ to give a general understanding of this great and beneficial field of knowledge to the society as well as our fellow readers.

A Brief History on the Knowledge of Maqasid

Al-Imam as-Syatibi, the First Master[1] of this field in his book al-Muwafaqat fi Usul as-Syari’ah had include a chapter on Maqasid al-Syari’ah, as well as placing it in a systematic way by including comprehensive and lengthy discussions on it.

However, before his work, there were other scholars who had already discussed this matter, like Imam al-Haramain al-Juwaini. In his book entitled Ghiyats al-Umam fi al-Tayyats al-Zhulam (غياث الأمم في تياث الظلم), he expressed his worry and concern on the issue of the fall of ethics in a Muslim community, especially in the aspect of Islamic scholars, intellectualism and politics. According to him, the only way to be free from this problem is none other than by establishing Maqasid al-Syari’ah which is universal and uplift it from zhanniy (speculative) to qat’iy (definite) and as the principle and the highest goal in Islam itself.

Besides, he repetitively stressed on the importance of Maqasid al-Syari’ah in understanding the Shari’ah texts, where he stated that:

“And whoever does not understand the existence of maqasid in the Shari’ah commands and prohibitions, then he does not acquire the clear and true prospect of Shari’ah” (Refer: Al-Burhan fi Usul al-Fiqh, 1/101)

Even if this concept brought by al-Imam al-Juwaini is not comprehensive enough in comparison to the concept offered by al-Imam al-Syatibi for example, but it is still a good basis for this field of Maqasid al-Syari’ah which is then expanded by the scholars afterwards. It is followed by his student which is Hujjatul Islam al-Imam al-Ghazali who lead the usage of the phrase of ad-Dharuriyyat al-Khamsah:

“And the purposes of Shari’ah are five, which are: to protect religion, life, intellect, lineage and their property” (Refer: al-Mustasfa min ‘llm al-Usul, 1/174)

Following these two are other scholars who wrote numerous books as well as presenting ideas and theories pertaining the issue of Maqasid al-Syari’ah and maslahah in detail. Among the prominent scholars are:

Other than them, there are other contemporary scholars who started to structure and expand this field of knowledge to the level it has reached today. Among them are:

Literally, Maqasid is the plural form of maqsad and maqsid (المقاصد), derived from the word qasada (قصد) in Arabic which means heading towards a direction.

While, syari’ah means water springs where it is the source of drinks, paths, what is sanctioned by Allah in the aspect of aqidah as well as rulings, the religion and the opinions of madhab which is clear and straight.

While according to syarak, the scholars have presented various definitions. ‘Allamah Muhammad Thahir ibn ‘Asyur defined the Maqasid al-Syari’ah as:

Meanings and wisdoms focused by syarak comprehensively or in most situations of revelation of the commandments without the specifying certain Shari’ah rulings. (Refer: Maqasid as-Syari’ah al-Islamiyyah, pg. 55)

The purposes of Shari’ah as well as its secrets set by Allah SWT for each rulings. (Refer: Maqasid as-Syari’ah wa Makarimuha, pg. 7)

Dr Ahmad ar-Raysouni is of the opinion that Maqasid al-Syari’ah is:

In brief, the definition of Maqasid al-Syari’ah according to these three definitions can generally be concluded as:

Purposes, meanings and wisdoms set by Shari’ah Islamiyyah in the sanctioned rulings as well as the secrets behind it with the purpose of protecting the welfare of humans.

The Contribution of al-Imam as-Syatibi

While scholars before him only emphasized on presenting ideas without any expansion or specific discussions, al-Imam as-Syathibi, on the other hand, detailed the field of Maqasid al-Syari’ah comprehensively, structured and systematic.

Indeed, al-Imam as-Syatibi has greatly contributed in this field of knowledge which explains the main purposes and objectives of Islamic Shari’ah.

The discussion on this theory of Maqasid al-Syari’ah by al-Imam as-Syatibi mentioned in al-Muwafaqat will be discussed in detail in the upcoming article, inshaaAllah.

The term Maqasid and Maslahah are widely used interchangeably for their same meaning. Among the examples of books that applied this method is Dhawabith al-Maslahah fi as-Syari’ah al-Islamiyyah by Almarhum Syeikh Sa’id Ramadhan al-Buthi. He stated that among the dhawabith (parameter) to be used in determining whether a maslahah is mu’tabarah, mulghah or mursalah is by inspecting either it is included in the principles of Maqasid al-Syari’ah or not.

Besides, it can be said that Maqasid al-Syari’ah is an expansion and extension of the concept of al-maslahah al-mursalah in Usul al-Fiqh. It is one of the sources of Shari’ah which its judgement is not agreed upon by all scholars (الدليل المختلف فيها), where it is counted as legal evidence in madhab Maliki, but is rejected by madhab Syafi’e.

Maslahah is also the core element in discussing the Maqasid in which tahqiq al-maslahah is the main purpose of the Shari’ah itself as mentioned by al-Imam as-Syathibi:

Verily, Shari’ah is established none other than for the goodness of mankind in this world and the hereafter. (Refer: Al-Muwafaqat, 2/9)

The Need of Mastering Maqasid al-Syari’ah

Dr Ahmad ar-Raysouni is of the opinion that mastering Maqasid is compulsory to all faqih (jurists):

Indeed, (knowledge on) Maqasid al-Syari’ah is a necessity upon each fuqaha’ in every aspects and form of ijtihad (Refer: Muhadharat fi Maqasid as-Syari’ah, hal. 104)

It (Maqasid al-Syari’ah) is something which is compulsory to be mastered by each fuqaha’ the same as the need for them to master the Shari’ah evidences itself. If not, study of Fiqh will be soulless and dry from any textual indication and purpose. (Refer: al-Ijtihad al-Maqasidiy, 1/65)

The Scopes of Maqasid

In congruent with the expansion of this knowledge of Maqasid, other fields of research as well as theories came about. Among them are:

It is a process of ijtihad done in accordance with the framework of Maqasid al-Syari’ah and its principles. Among the works done in this field are ‘Al-Ijtihad al-Maqasidiy: Hujjiyatuhu, Dhawabituhu, two volumes of Majalatuhu’ by Dr. Nuruddin bin Mukhtar al-Khadimiy.

It means a Maqasidiy mind which comprehends the Shari’ah texts based on the framework of Maqasid al-Syari’ah as well as the way of thinking based on the Maqasid and its principles. Among the works that discusses this theory is a book entitled al-Fikr al-Maqasidiy by Dr. Ahmad ar-Raysouni.

It is also referred to as at-Tafsir al-Maudhu’iy, which is manhaj tafsir al-Quran (commentary of the Quran) according to the framework of Maqasid al-Syari’ah and some certain themes. Among the works on this is at-Tafsir al-Maqasidiy li Suwar al-Qur’an al-Karim by Dr. Wasfi ‘Ashur Abu Zayd and Nahwa Tafsir Maudhu’iy li Suwar al-Qur’an al-Karim by Syeikh Muhammad al-Ghazzaliy.

Nowadays, Maqasid al-Syari’ah has expanded as a specific discipline of knowledge and not merely a topic/chapter in the study of usul al-fiqh. Numerous Islamic scholars and thinkers even discussed this in their books and writings.

Maqasid al-Syari’ah also has been made as the parameter and benchmark in every fields; among them are in the issue of human rights, economic growth, public governance, political practice, environmental care as well as economic and banking governance.

In the upcoming articles, we will discuss in detail on the division of Maqasid al-Syari’ah, its categories as well as the Maqasid ideas according to the past and contemporary Maqasid scholars as well as its relation to the current issues which should be taken into consideration by the Muslim community, inshaaAllah.

[1] The title al-Mu’allim al-Awwal (First Master) was given to Aristotle for his contribution in structuring the Greek philosophy in a systematical way, then followed by al-Farabi who was known as al-Mu’allim as-Thani (Second Master) due to his ability to understand Aristotle’s ideas brilliantly while discussing it further. Due to this, the writer titled al-Imam as-Syatibi as the First Master due to his contribution in structuring the Maqasid al-Syari’ah in a systematic way, followed by Syeikh Muhammad Thahir ibn ‘Asyur (Second Master) who enlivened this field of knowledge on the early 20th century after it has long been not expanded after the writing of the al-Muwafaqat. Then, Dr Ahmad ar-Raysouni came as the Third Master who discussed this as well as accumulating new perspectives on it to ensure its relevance throughout time.