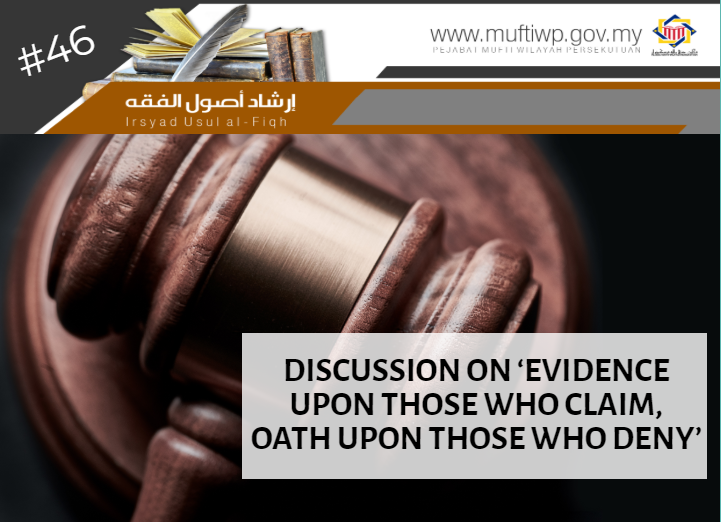 Assalamualaikum S.S Mufti, can you explain the maxim which states that when one submits a claim, then he should bring evidence to support his claim. While when one who is alleged of something and he wants to deny the accusation, then he should take an oath. Hope for an explanation.

The maxim meant in the above question based on a hadith narrated by Ibn Abbas R.Anhuma when he said that the Prophet PBUH said:

If the people were given according to their claims, they would claim the lives of persons and their properties, but the oath must be taken by the defendant.

While there is another narration from Ibn Abbas where he said that the Prophet PBUH said:

Imam al-Nawawi in his commentary of this hadith said: This hadith is a greater maxim than the maxims of syarak rulings. It means that a claim made by a person is not easily accepted because it is just a mere claim. In fact, (claim) needs evidence or a confession from the defendant. If the defendant is asked to take an oath to deny the accusation, then he may do so (take an oath). Refer Syarah Al-Nawawi ‘ala Muslim (4/12).

Imam al-Tirmizi said: The application based on this hadith according to scholars among the Companions and others is ‘evidence is upon those who claim (those who submit claims and allegations), and an oath is upon defendant’.

The above hadith in the mafhum perspective also leads to another famous concept stated through a Fiqh maxim:

The original rule of a person is being free from any obligation.

As an example, if one claims that another person has commit an evildoing upon him, then the original rule of the alleged person is being free from it unless the accuser present evidences to prove his claim.

Imam Ibn al-Munzir in his comment on the above maxim said:

Hence, it may be understood that when one accuses someone, then it is impermissible for a judge to sentence him based just on the accusation. In fact, the accuser should present evidences to support the claim and the judge should rule based on these evidences.

The ashab (Shafi’ite scholars) have differing opinions on the definition of the plaintiff and the defendant. And they have many explanations on defining them and the conclusion comes back to two definitions deduced from the statement of Imam al-Syafi’e.

First: Plaintiff (the claimant) is a person whose words contradicts reality. While the defendant (accused). This is the opinion explained by al-Ruyani and majority of the ashab which also indicates the same as well as the one preferred by al-Rafi’e and al-Nawawi.

Second: Plaintiff is one who when he is silent, he will be left. While defendant will not be left if he is silent, but in fact, is commanded to answer (the accusation upon him).

While Syeikh Muhammad al-Zuhaily in explaining the meaning of the maxim said: Bayyinah (evidence) is something that explains or enlightens the truth. This in the context of Fiqh is referred to as al-syahadah (eyewitness) and is an obligation of the plaintiff. While taking Islamic oath in the names of Allah is upon those who deny any claim upon him. This maxim according to the Quran and hadith is a saying from a famous Prophet PBUH’s hadith narrated by al-Bukhari, Muslim as well as ashab al-sunan.

He added: The wisdom is the plaintiff’s side is weak as he claims something that contradicts the apparent reality. Hence, a strong argument is obligated upon him to strengthen the weak side. And the strong argument refers to al-bayyinah (evidence). While the defendant’s side is strong as the original rule is one is free from any accusation. Hence, it is enough for him to use the weak argument, which is by taking an oath. Refer Al-Qawa’id Al-Fiqhiyyah wa Tathbiqaatuha fil Mazahib al-Fiqhiyyah, Dr. Muhammad Musthafa al-Zuhaili (1/589).

In Masu’ah al-Qawa’id al-Fiqhiyyah, it is stated: Indeed, evidence which is an eyewitness is only wajib upon the plaintiff. While oath is obligated upon the defendant as he denies the claim made upon him when there is no evidence presented by the plaintiff and when the defendant is commanded to take an oath. If not, surely, many people will claim others’ blood and property through baseless accusations. Refer Mausu’ah Al-Qawa’id al-Fiqhiyyah (8/781).

The Application of the Maxim

Here, we share some examples of the application of the maxim. Among them are:

As a conclusion, we state that Islam is concerned about the human’s soul, blood as well as property. Hence, among the ways of protecting all of these is by not easily sentencing punishments on someone due to mere claims and accusations upon him. Conversely, Islam set a maxim so that the one who claims something should present the evidence of his claim. While when there is no evidence presented, then one should strengthen the denial of the claim upon him by taking an oath.

Still, it should be explained that the above maxim is a general guideline set by Islam which may be applied upon different cases. However, if certain cases are under the legal procedure practised in a certain place, then the process of judgement and legal proceedings is in accordance with the correct procedure and channel is prioritized to preserve justice and correct decision.

Lastly, may Allah SWT give us the correct understanding in this religion. Amin.