IRSYAD USUL AL-FIQH SERIES 60: SITUATIONS WHERE THE PUBLIC NEEDS TO DO ‘IJTIHAD’ 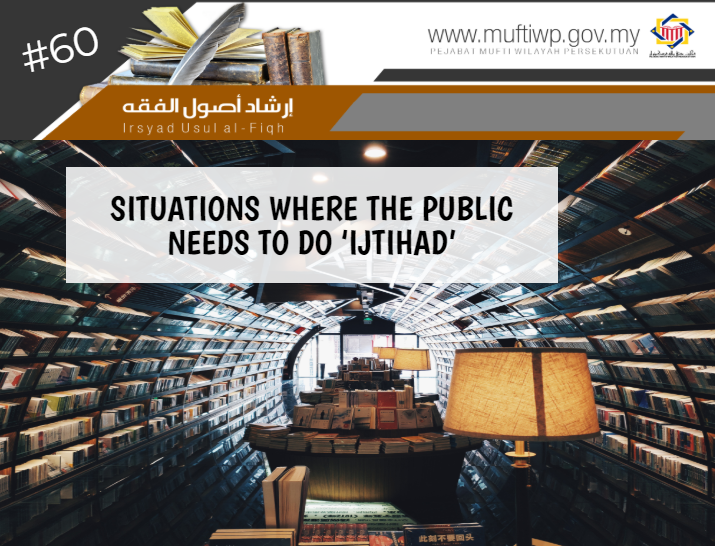 So, it is understood from both definitions that ijtihad generally refers to an effort or struggle in doing something, and it encompasses all people without being specified to any specific individuals. While in term of its technical definition, it refers to the effort of extracting Shari’a rulings which is specified only to a mujtahid scholar, who should pass strict conditions to be eligible to do ijtihad by his own.

Situations where the public needs to do ‘ijtihad’

There is a famous Islamic legal maxim which states:

Ijtihad is not abrogated by another ijtihad

According to Sheikh Muhammad Sidqi al-Borno, the term ijtiad in this maxim does not refer to the specific term which is ijtihad in extracting the Fiqh rulings from Shara’ evidences, but it refers to three things, one of them is al-taharriy (التحري), which is the effort in stating the precision and truth in a matter. (Refer Al-Wajiz fi Idhah Qawa’id al-Fiqh al-Kulliyyah pg. 385-386)

According to Imam Jalaluddin al-Suyuti, among the example for the application of this maxim is when one performs prayer after he put an effort (ijtihad) in stating the qibla direction based on his knowledge, zhan (assumption) and proof, then, it is proven that his ijtihad on the qibla direction is changed, then he doesn’t need to qada’ the prayer. In fact, if one performs prayer by facing different qibla for each rakaat due to his change in ijtihad, then his prayer is still valid and he doesn’t need to qada’ it.

Besides, it is stated that a condition where one has two containers of water, he is certain that one of them is pure while one is impure based on his ijtihad. Then, his ijtihad changes that he becomes certain that the second container is pure. He should throw away the water from both containers and perform tayammum (as tayammum is void of the presence of water) because his second ijtihad cannot cancel the first one. (Refer Al-Asybah wa Al-Nazha’ir, pg. 101-102; Al-Manthur fi al-Qawa’id al-Fiqhiyyah by Imam al-Zarkasyi 1/95 and Al-Taqrirat al-Sadidah fi al-Masa’il al-Mufidah Qism al-‘Ibadat, pg. 73)

“Indeed, no one is free from the obligation of doing ijtihad, for every muqallid has his own portion in ijtihad where he chooses for himself a Mufti who will rule a fatwa for him” (Refer Janyu al-Thamarat min Nazm al-Waraqat, pg. 214)

In this case, one should strive to search for a mufti, teacher or a scholar to ask for a fatwa on rulings and put an effort to find and choose a mursyid guru in gaining knowledge.

All of the above situations encompass all types of people, whether a mujtahid or general public, learned or not in which it is needed for them to do ijtihad (taharriy) in deciding on a specific matter.

In short, we state here that there are some situations in which every person is needed, whether a mujtahid or general public in the sense of searching and deciding about something. Among the example for the ijtihad is determining the qibla direction to perform the prayer, stating whether a container of water is pure to take ablution with, choosing clothes which are pure to perform prayer as well as looking for a mufti to ask for a fatwa and explanation on rulings.

While ijtihad in the sense of effort and struggle to extract the Shari’a rulings, it is still specified to only the eligible mujtahids and scholars.