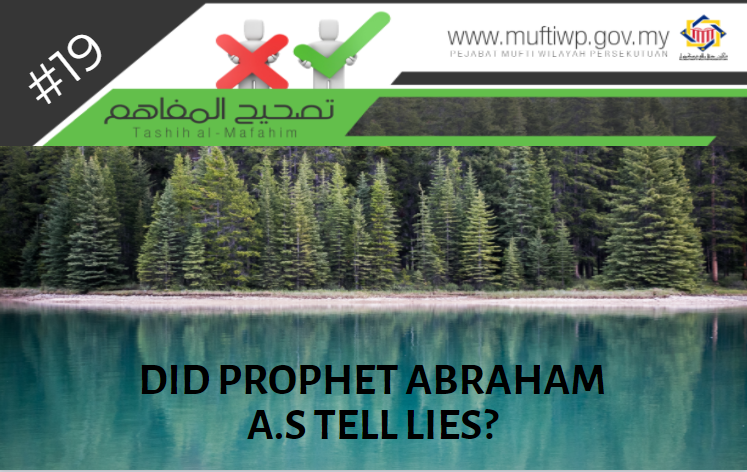 Abraham A.S is a prophet which is said by Allah SWT as who always precedes in obeying His command without having any doubt. Allah SWT says:

And [mention, O Muhammad], when Abraham was tried by his Lord with commands and he fulfilled them. [Allah] said, "Indeed, I will make you a leader for the people."

Coming back to the presented question, indeed, there are hadiths which literally portray that it seems like Prophet Abraham was lying. It is narrated by Abu Hurairah that the Prophet PBUH said:

"Abraham did not tell a lie except on three occasions."

In another narration, Abu Hurairah RA, it is stated in detail on those three matters. He said:

Prophet Ibrahim (peace be upon him) never told a lie but only thrice: two times for the sake of Allah (for example, his words): "I am sick," and his words: "But it was the big one amongst them which has done that" and because of Sara (his wife). He had come in a land inhabited by haughty and cruel men along with Sara. She was very good-looking amongst the people, so he said to her: If these people were to know that you are my wife they would snatch you away from me, so if they ask you tell them that you are my sister and in fact you are my sister in Islam, and I do not know of any other Muslim in this land besides I and you. And when they entered that land the tyrants came to see her and said to him (the king): 'There comes to your land a woman, whom you alone deserve to possess', so he (the king) sent someone (towards her) and she was brought to him, and Ibrahim (peace be upon him) stood in prayer. When she visited him (the tyrant king came) he could help but stretch his hand towards her and his hand was tied up. He said: 'Supplicate to Allah so that He may release my hand and I will do no harm to you.' She did that and the man repeated (the same highhandedness) and his hand was again tied up more tightly than on the first occasion. He said the same thing to her again, and she again did that (supplicated), but he repeated (the same highhandedness and his hands were tied up more tightly than on the previous occasion). He then again said: 'Supplicate your Lord so that He may set my hand free; by Allah I shall do no harm to you.' She did and his hand was freed. Then he called the person who had brought her and said to him: 'You have brought to me the satan and you have not brought to me a human being, so turn them out from my land,' and he gave Hajar as a gift to her. She returned (along with Hajar) and when Ibrahim (peace be upon him) saw her, he said: 'How have you returned?' She said: 'With full safety (have I returned). Allah held the hand of that debauch and he gave me a maid-servant.' Abu Huraira said: 'O sons of the rain of the sky, she is your mother.'

Abraham did not tell lies except three. (One of them was) when Abraham passed by a tyrant and (his wife) Sara was accompanying him (Abu Huraira then mentioned the whole narration and said:) (The tyrant) gave her Hajar. Sara said, "Allah saved me from the hands of the Kafir (i.e. infidel) and gave me Hajar to serve me." (Abu Huraira added:) That (Hajar) is your mother, O Banu Ma'-As-Sama' (i.e., the Arabs).

Coming back to the presented question, if we see through the literal meaning of these narrations, it shows that it is most likely that Prophet Abraham A.S said lies while in fact one of the mandatory attributes of the Prophets and Apostles is honesty. They are preserved from uttering words of lies and fabrication.

In truth, Prophet Abraham A.S was not lying. On the other hand, he said something which carries a meaning otherwise. This is explained by Ibn Hajar al-Asqalani. He said:

“Whereas what is said by the Prophet PBUH that Prophet Abraham A.S was likely to lie is in fact said something regarded as lying, but in careful consideration, is not a lie because it is among al-Mu’aridh (uttering words with multiple meaning) which highly possible to carry two meanings. Therefore, it is definitely not a lie”. (Refer Fath Al-Bari Syarh Sahih Al-Bukhari, 6/391)

“It means that telling lies mentioned in the hadith is to address the listeners’ understanding. While the utterances themselves are not a reprehensible act.” (Refer Al-Minhaj Syarh Sahih Muslim, 15/124).

The scholars explained in detail what is meant by Prophet Abraham A.S utterance which was taken falsely as a lie.

“This is the introduction of the argument that those idols are not God. It is also a protest towards his people who claim that those idols able to give harm or benefit. This kind of argument is permissible with the condition that it is closely followed by the main point. This is because, after he said that the one who destroys all other idols is the biggest among those, Prophet Abraham quickly said ‘go ask the biggest idol if it can speak’. Ibn Qutaibah said: It was done by the biggest idol if those (the idols) can talk. If they cannot talk, then the biggest idol was not the culprit.” (Refer Fath Al-Bari Syarh Sahih Al-Bukhari, 6/392)

It is an argumentative utterance to deny whatever done by his people. This is a logical reasoning which directly rejects all idols worshipped by his people.

These are the interpretations and real meaning of the utterance which are considered as lying by the people if it is literally understood. However, what is meant is different from what is understood. This is what we say as al-Mu’aridh (المعاريض). Therefore, a companion of the Prophet PBUH named Imran bin Hussain said:

“Indeed, in the utterance of al-Mu’aridh (indirect utterance), it is far from lying”

Narrated by al-Bukhari (857) in Al-Adab Al-Mufrad

“And mention in the Book [the story of] Abraham. Indeed, he was a man of truth and a prophet.”

May Allah give understanding to us all. Wallahu a’lam.