AL-AFKAR #61: SUPPLICATING FOR GUIDANCE FOR THE NON-MUSLIMS 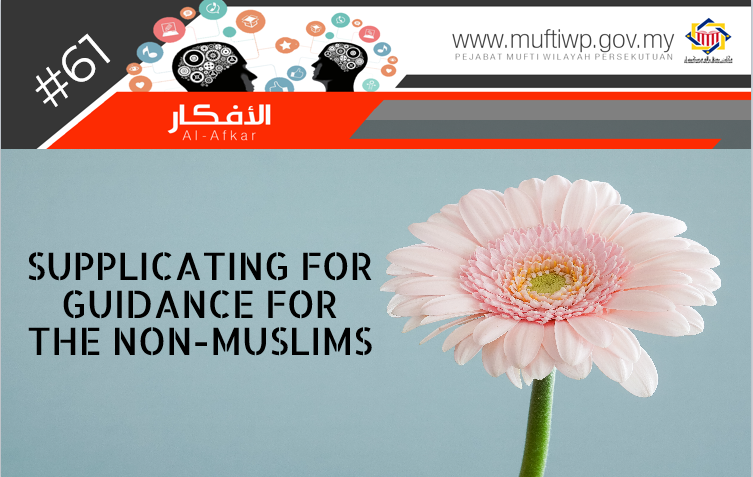 Assalamualaikum SS Dato’ Seri Mufti. Is it permissible for us to supplicate for the non-Muslims, such us supplicating guidance for them? Hope for an explanation.

Supplicating for the non-Muslims such as supplicating for guidance for them is permissible. Among the evidences that ruled it permissible is a hadith narrated from Abu Hurairah RA, he said: Tufail bin Amir once came to complain about the wrongdoing of his people to the Prophet PBUH. Tufail said:

"O Allah's Messenger (ﷺ)! The tribe of Daus has disobeyed (Allah and His Apostle) and refused (to embrace Islam), therefore, invoke Allah's wrath for them,”

"O Allah! Guide the tribe Of Daus and let them come to us."

Imam al-Bukhari named the chapter for this hadith in his book as: “بَابُ الدُّعَاءِ لِلْمُشْرِكِينَ بِالْهُدَى لِيَتَأَلَّفَهُمْ” (Chapter of supplicating goodness for the disbelievers in the form of asking for them guidance that could soften their hearts).

Imam Nawawi said: “If a person offers greetings to a zimmi disbeliever with a greeting other than salam, then al-Mutawalli and al-Rafi’I ruled it permissible. For example, a person said to a non-Muslim ‘may Allah bless you with guidance’ and ‘May you be favoured today’, then it is not an issue.” (See al-Majmu’, 4/607-608)

In another hadith narrated from Abi Musa al-Asy’ari, he said:

The Jews used to sneeze in the presence of the Prophet (ﷺ) hoping that he would say: 'Yarhamukumullah (May Allah have mercy upon you).' So, he said: 'Yahdikumullahu Wa Yuslihu Balakum (May Allah guide you and rectify your affairs).'"

Al-Hafiz Ibn Hajar al-Asqalani said: According to syarak, the hadith from Abi Musa shows that they are included in the absolute commandment to respond when a person sneeze. However, for non-Muslims, we are specifically asked to ask for guidance and goodness for them. It is different with the respond to a Muslim person who sneezes. The reason is, they deserve to get supplication and blessings. (See Fath al-Bari, 10/604)

The same opinion is presented by Syeikh al-Mubarakfuri and he continued: “And a Muslim should not say to them ‘’. The reason is, blessings and rahmah is only for the believers. Nevertheless, he should supplicate for goodness for them such as guidance and faith.” (See Tuhfah al-Ahwazi, 8/10)

Al-Imam al-Qarafi said: “As for the commandment to do good to them (non-Muslims) without the basis of love, caring for the weak, empathizing and helping the poor and needy, providing food for those who are hungry, giving clothes for those who need them, talking politely to them on the basis of kindness and affection, not through fear and insults, being patient when there are disagreements while living together as neighbours or friends with them and try to resolve it in good terms, as a form of our compassion not because of fear or honour towards them, asking for guidance and happiness for them, advising them in all matters; whether it is worldly matters or religious matters, protecting their property, family and dignity for all their rights and well-being, striving to prevent any abuse on them, maintaining their rights, all of these should be done for they are a part of good character and conduct.

Everything that we do for them, should be done from this perspective, not doing them for honour or glory. Nor should it to honour them and degrading ourselves by doing these.” (See al-Furuq, 3/15)

According to the above evidences and discussion, supplicating for the non-Muslims is permissible but there are certain guidelines and reasons as stated above. We have given a comprehensive answer in an article titled Fiqh al-Ta’ayush[1] for how a harmonious and peaceful lives could be built between Muslims and non-Muslims without any prejudices that could result in hatred and animosity. This is a great loss to a certain nation and country and the light of peace and harmony is no longer visible.

We pray to Allah that our lives are peaceful and harmonious and ultimately lead to happiness and contentment. Amin.