AL-AFKAR #62: THE DIFFERENCE BETWEEN PROPHET AND MESSENGER 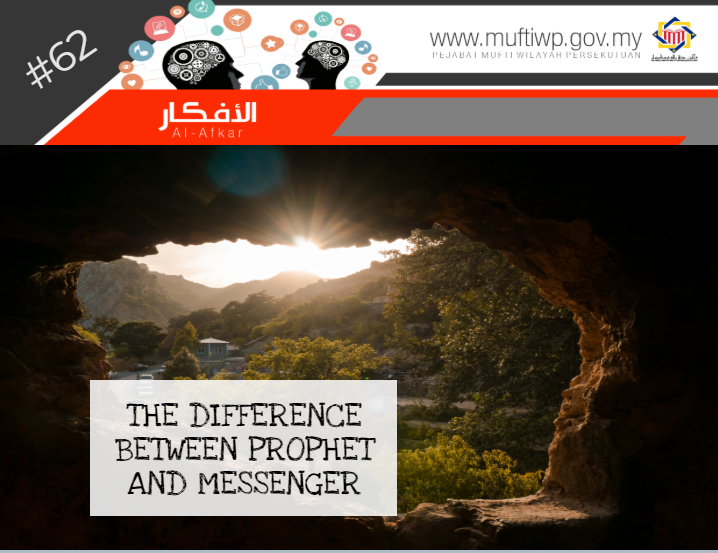 What is the difference between a prophet and a messenger? I once read that it is wajib for a messenger to convey the revelation that he receives from Allah SWT while it is not so for a prophet. Is this statement true?

Signs That There Are Differences Between Prophet and Messenger

The signs that there are differences between prophet and messenger is mentioned in the statement of Allah SWT:

“And We did not send before you any messenger or prophet except that when he spoke [or recited], Satan threw into it [some misunderstanding].”

In the above verse, Allah SWT states prophet and messenger separately and if they are the same, surely, Allah SWT will not repeat the words.

Furthermore, there are several hadiths that indicate there are differences between prophet and messenger. Among them is a hadith narrated by Abu Dzar al-Ghifari RA:

The status of the hadith: The evaluator for Sahih Ibn Hibban, Syeikh Syu’aib al-Arna’ut state that the hadith is very weak (dha’if jiddan). (Refer Tahqiq Sahih Ibn Hibban 2/79). This hadith is dhaif according to Imam al-Suyuti (Refer al-Durr al-Manthur 5/132). According to Imam Ibn Kathir, one of the narrators of this hadith, Ibrahim bin Hisyam is criticized by numerous hadith scholars such as Imam Ibn al-Jauzi and this is the reason he placed it in his collection of fake hadiths, al-Maudhu’at. (Refer Tafsir Ibn Kathir 2/470)

Definition and Differences between Prophet and Messenger

First opinion states – and among the famous definitions – Prophets receive revelations in the form of syara’ and he is not commanded to convey or deliver the message, whereas, for Messengers, they are commanded to convey and deliver the revelation that they received. This is the chosen opinion according to Ibn Abi al-‘Izz al-Hanafi and Imam al-Sya’rani. (Refer Syarh al-‘Aqidah al-Tohawiyyah, pg. 158 and Al-Yawaqit wa al-Jawahir 2/22)

Syeikh Sulaiman al-Asyqar rejects the above definition due to several reasons:

The second opinion states that messengers received a scripture or rulings which does not exist in previous teachings. As for prophets, they are sent to call towards the teachings revealed before him, without the revelation of scripture or new rulings. Thus, we state that every messenger is a prophet but not every prophet is a messenger. There is an opinion which state that prophet and messenger are the same, however, the first opinion is more sahih. This is the opinion of Imam al-Zamakhsyari, Imam al-Baidhawi, Imam al-Nasafi, Syeikh Abd al-Razzaq ‘Afifi and Syeikh Sulaiman al-Asyqa. (Refer Tafsir al-Kasyyaf 3/37, Anwar al-Tanzil wa Asrar al-Ta’wil 4/57, Tafsir al-Nasafi 3/106, Muzakkirah al-Tauhid 1/43 and al-Rusul wa al-Risalat, pg. 14-15)

Among the evidences that support this opinion is the statement of Allah SWT:

“Indeed, We sent down the Torah, in which was guidance and light. The prophets who submitted [to Allah] judged by it,”

The same can be observed in the statement of Allah SWT:

"Indeed, I am the servant of Allah. He has given me the Scripture and made me a prophet.”

This verse shows that the revelation of scripture is not limited to Messengers but also to prophets.

The third opinion states that messengers are sent to disobedient and disbelieving people, while prophets are sent to believers to teach them the things they already know or the things that have been taught to them.

Among the evidences that supported this opinion is the commentary of Ibn ‘Abbas R.Anhuma on Allah SWT’s statement:

“Mankind was [of] one religion [before their deviation]; then Allah sent the prophets as bringers of good tidings and warners and sent down with them the Scripture in truth to judge between the people concerning that in which they differed.”

According to Ibn ‘Abbas R.Anhuma: The duration of time between the time of Prophet Noah and Prophet Adam is ten centuries and all of mankind at the time was holding onto the teachings of Allah SWT, however, afterwards, there are contradictions and they start to disobey and disbelieve, then Allah SWT sent prophets to convey good news as well as warnings. Ibn Kathir said, during this duration the Prophet Noah was sent as the first messenger to mankind. (Refer Tafsir Ibn Kathir 1/425)

Moreover, tsabit from the Prophet PBUH regarding intercession in the hereafter, where it is stated:

“So, they will go to Noah and say (to him), 'O Noah! You are the first (of Allah's Messengers) to the people of the earth,”

This hadith is also evidence that Prophet Adam is just a prophet and not a messenger because all of his family members believe in Allah SWT.

We could also see in the Quran where Allah SWT state clearly that messengers are sent to guide their people back to the road of tawhid:

“We had certainly sent Noah to his people, and he said, "O my people, worship Allah; you have no deity other than Him.”

“And to the 'Aad [We sent] their brother Hud. He said, "O my people, worship Allah; you have no deity other than Him.”

“And to the Thamud [We sent] their brother Salih. He said, "O my people, worship Allah; you have no deity other than Him.”

“And to [the people of] Madyan [We sent] their brother Shu'ayb. He said, "O my people, worship Allah; you have no deity other than Him.”

“O my father, do not worship Satan.”

“And indeed, Elias was from among the messengers, when he said to his people, "Will you not fear Allah? Do you call upon Ba'l and leave the best of creators - Allah, your Lord and the Lord of your first forefathers?"

The same for when Prophet Moses is sent to the pharaoh and the Prophet PBUH is sent to the Quraisy disbelievers, bringing the message of tawhid which comprise of all mankind until the last day, all of them are clear guidance that they are messengers sent to guide their people back to the road of obedience to Allah SWT after they have disbelieved and commit syirk by worshipping other than Allah SWT.

To conclude, in our opinion the definition that is commonly used for prophets as those of whom who receive revelation but are not commanded to convey it is inaccurate and this opinion is criticized by various scholars.

We hold the definition presented by Ibn Taimiyyah which states messengers are sent to disobedient and disbelieving people, whether with new teaching like the Prophet Muhammad PBUH received or to continue the previous teachings like the Prophet Ishmael who was sent to the people of Hurhum bringing the teaching of his father the Prophet Abraham. As for prophets, they are sent to believers such as the Prophet Adam, Idris, Syith and others. This definition has been analysed to be consistent with the verses of the Quran, the narrations of the life of prophets and mursalin. Thus, in our opinion, this is the strongest definition.