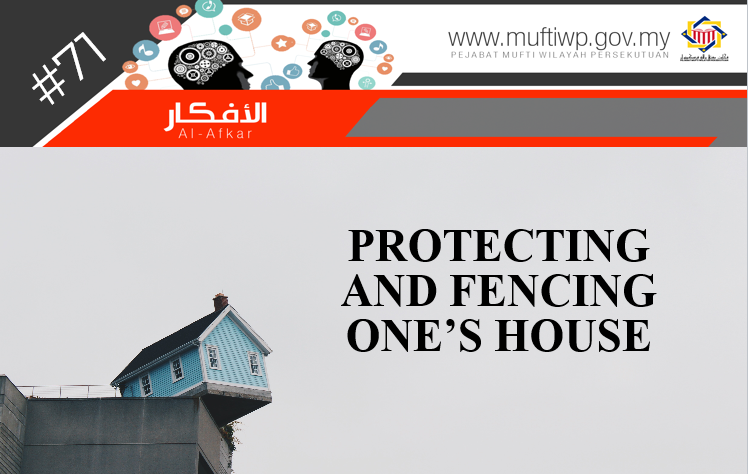 Assalamualaikum SS Datuk Mufti. I want to ask regarding the practice of asking for protection such as ‘fencing’ a house. Is this permissible? Thank you.

In the matters of protecting oneself and his house from the disturbances of shaytan, the Prophet PBUH teaches us several practices that we can do. Among them is by reciting surah al-Baqarah and ayat al-Kursi. In a hadith narrated by Abu Hurairah RA, the Prophet PBUH said:

“Do not make your houses as graveyards. Satan runs away from the house in which Surah Baqara is recited.”

According to Ibnu Mas’ud RA, the Prophet PBUH said:

“Indeed, the shaytan when he hears the recitation of al-Baqarah in a house, he would run away from the house,”

In a hadith narrated from Ubai bin Ka’ab, he owned a drying area for dates and in it are the dates under his care. Afterwards, he discovered that his dates have decreases. Suddenly, he saw an animal the size of a child who has just reached puberty. He asked him: “Are you a jinn or human?” The creature answered: “I’m a jinn.”

In this narration, the jinn states: “I heard that you love to donate. Thus, I came to get some of your donations.” Thus, Ubai bin Ka’ab asked:

“What can protect us from you disturbing us?” The jinn answered: “This verse, which is the verse of Kursi.” The following day, Ubai narrated the story to the Prophet PBUH and the Prophet PBUH said: “The jinn spoke of the truth.”

The Prophet PBUH also taught is a supplication when we are entering our house. In a hadith narrated by Jabir bin Abdillah R.Anhuma, the Prophet PBUH said:

Almarhum Dato’ Dr haron Din commented on the issue of fencing one’s house, saying: “The best way to fence a house is by increasing the recitations of the Quran in the house.” (See Kaedah Merawat Susuk, pg. 48)

Moreover, other sunnah worships should be performed in one’s house and not at the mosque. In a hadith narrated by Ibnu Umar R.Anhuma, the prophet PBUH said:

"Offer some of your prayers (Nawafil) at home, and do not take your houses as graves."

What is meant by prayer here is sunnah prayers that is performed alone. This is as stated in a hadith from Zaid bin Thabit RA, where the Prophet PBUH said:

“For the best prayer of a person is that which he prays in his house except the compulsory prayers.”

Thus, it is wise for us to practise the matters stated above as an effort to protect oneself and one’s house from any disturbances. Indeed, Allah SWT is the best of protector and the One to depend on. Allah SWT states:

Say, "Never will we be struck except by what Allah has decreed for us; He is our protector." And upon Allah let the believers rely.”

Ibn Kathir said: All of us are under His will and determination. To Him we rely and depend on for He is the best of protector. (See Tafsir al-Quran al-‘Azim, 7/214)

To conclude, Islam permits the fencing of one’s house as long as the ruqyah recited is from the Quran which could protect us from the disturbances of the shaytan.

According to the above verses, it is clear that protection of oneself and one’s house can be done by reciting surah al-Baqarah and ayat Kursi as stated in the hadith of the Prophet PBUH.

Thus, ask your family members to always recite al-Quran and ma’thur zikr such as al-Ma’thurat, Hisnul Muslim and others. Hopefully, it can act as a protection for us and our family members from any disturbances.