THE RULING OF COCKFIGHTING AND THE GAMBLING INVOLVED 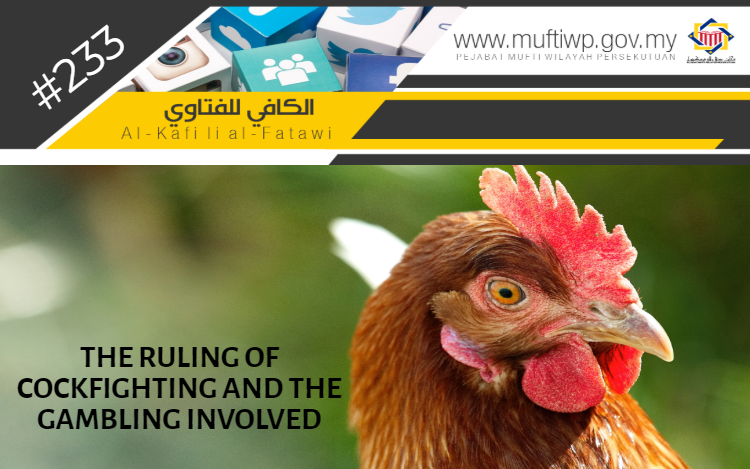 Can SS Mufti explain regarding cockfighting practice especially in our Malay community and the gambling involved in it as well as the rulings of it according to the Quran and hadith?

Cockfighting is prohibited in Islam. Narrated from Ibn Abbas R.Anhuma:

“The Messenger of Allah (ﷺ) prohibited to provoke the beasts for fighting.”

Imam al-Syaukani commented on the above hadith:

“The point of prohibition (in the hadith) is the act of provoking animals to fight each other which will lead to the animals being harmed or tired where the act is unbeneficial (according to Syarak) and meaningless.” (See Nail al-Autar, 8/99)

The act of instigating fights between animals which will result in injuries on the animal is a form of cruelty on animals. While Islam taught us to be compassionate towards all creations of Allah SWT, which also includes not harming animals. The Prophet PBUH said:

Verily Allah has prescribed ihsan (proficiency, perfection) in all things. So, if you kill then kill well; and if you slaughter, then slaughter well. Let each one of you sharpen his blade and let him spare suffering to the animal he slaughters.”

Second, this is a bad tradition from transgressing people of the Prophet Noah AS and also a practice of non-Muslims in several countries. Furthermore, it is also considered as undignified and immoral in Islam.

Regarding the ruling for gambling, its prohibition is clearly stated in the Quran without any khilaf among the scholars on its prohibition. Allah SWT state:

“O you who have believed, indeed, intoxicants, gambling, [sacrificing on] stone alters [to other than Allah], and divining arrows are but defilement from the work of Satan, so avoid it that you may be successful.”

Commentary scholars said, one should study the verse and see the words and phrases; “indeed” “defilement” “work of Satan” “so avoid it” clearly proves the tremendous danger and sin gambling is.

Let us all leave this act and replace it with other beneficial actions or hobbies that will be rewarded by Allah SWT and increase the weight of our good deeds in the hereafter as stated by Allah SWT:

“The Day when there will not benefit [anyone] wealth or children. But only one who comes to Allah with a sound heart."