AL-KAFI #1177: THE RULING OF JAMAK AND QASAR PRAYER DURING TRAVEL WITHOUT SPENDING THE NIGHT 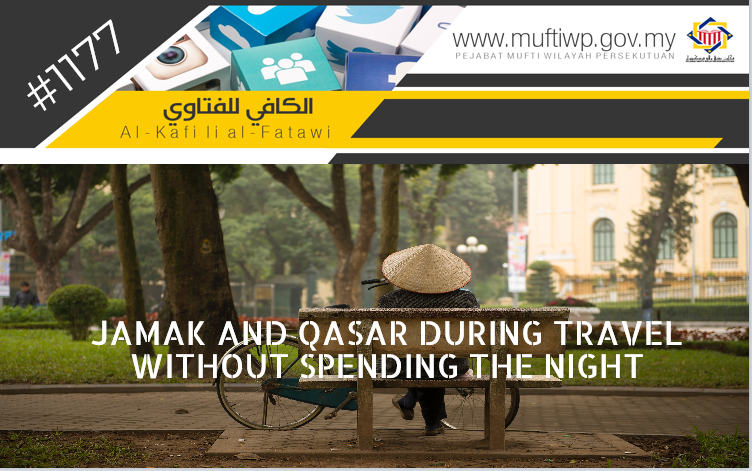 I’m going to send my kid back to his university in Alor Gajah from Subang Jaya where the distance for the travel exceed two marhalah and outside from my place of residence. Is it permissible for me to perform jamak for my prayer before I arrive at my house even if I don’t spend the night anywhere for my travel?

There are three valid conditions for prayers of a traveller, which means for jamak and qasar prayer:

Whereas, there is no valid conditions that state an obligation to stay overnight. Consequently, the syarak set the maximum time is three days excluding the day one arrives and the day one travels back. This is in accordance with a hadith from al-‘Ala bin al-Hadhrami RA, where the Prophet PBUH said:

“It is only for three nights that a Muhajir should stay at Mecca after the completion of the rituals of Hajj.”

Imam Abu Ishak al-Syirazi said before using the above hadith as evidence: “If a traveller has the intention to stay for four days excluding the day he arrives and leave, then he became a temporary resident (due to his intention), ending the rukhsah (facilitation) for the traveller, as for a traveller who has the intention to stay for three days, he is not considered as a resident.” Refer al-Majmu’ Syarh al-Muhadzdzab (4/359)

Regarding the evidence of jamak prayer when one is travelling, from Ibn Abbas R.anhuma, he said:

The next hadith is from Ibn Abbas R.anhuma:

The Messenger of Allah (ﷺ) combined the prayers as he set on a journey in the expedition to Tabuk. He combined the noon prayer with the afternoon prayer and the sunset prayer with the 'Isha' prayer. Sa'id (one of the rawis) said to Ibn 'Abbas: “What prompted him to do this?” He said: “He wanted that his Ummah should not be put to (unnecessary) hardship.”

According to the above discussion, it is permissible for a person who travels to a destination of more than two marhalah to perform jamak and qasar, even if he travels without staying overnight. May this explanation benefit the questioner. Wallahua’lam.