AL-KAFI #1477: DOES KHULU’ (DIVORCE REQUESTED BY THE WIFE) DECREASE THE NUMBER OF TALAK? 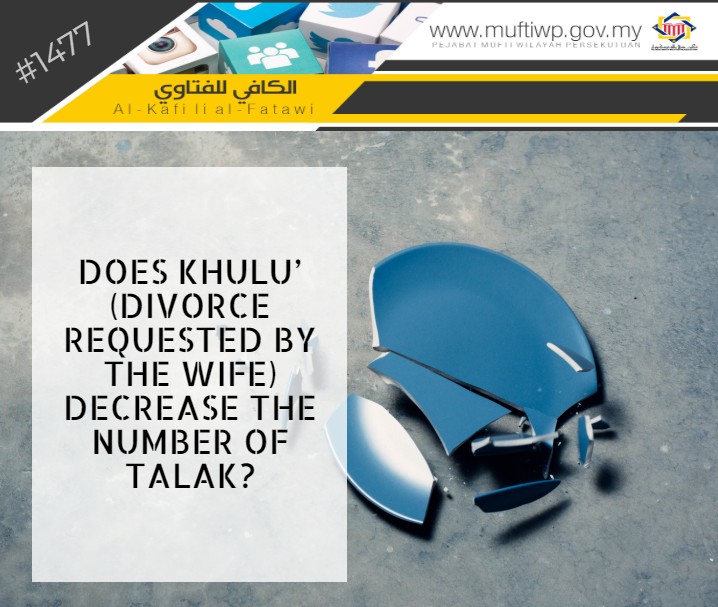 Assalamualaikum, I want to ask for an explanation, if a wife has been divorced (talak) 2 times and both times they reconciled (rujuk). After that, they get divorced again but through khulu’. However, after a couple of years they decided to reconcile again (rujuk). Is this permissible? Or does this mean that they are considered to have divorced three times (the third divorce is also considered as talak)?

Khulu’ literally means taking off, removing or releasing. The definition of khulu’ is a separation between a husband and wife with a compensation (payment) given by the wife to her husband with the utterance of talak or khulu’. Generally, Malaysians are more familiar with the term ‘tebus talak’ (talak redemption).

The difference between normal talak and khulu’ is that talak happens according to the what the husband wishes for, while khulu’ is the desire of the wife to get a divorce which is accompanied by compensation that she is willing to pay as a redemption for the divorce. Thus, it is sanctioned for her to redeem herself from her husband by returning an amount from her dowry that have been agreed by both parties. (Refer al-Fiqh al-Manhaji 4/127)

Thus, if divorce happens for the third time through khulu’, then it is haram for the man to marry his wife again as long as the wife has not married another man. (Refer Mu’tamad fi al-Fiqh al-Syafie 4/202)

When divorce happens through khulu’ or redemption of talak, then the marriage has completely ended (talak ba’in sughra). Talak ba’in sughra cannot be referred to whether the khulu’ happens before or after intercourse except with a new akad and dowry.

Hanafiyah, Malikiyyah scholars and the rajih opinion of Syafi’iyyah scholars and narration from Imam Ahmad hold the opinion that khulu’ is considered as talak bain sughra even without a compensation payment or the intention of talak. This is according to a statement of Allah SWT:

“But if you fear that they will not keep [within] the limits of Allah, then there is no blame upon either of them concerning that by which she ransoms herself.”

And the meaning of ransoms herself (الفداء) is when a wife releases herself from her husband’s authority and the husband do not have a right to reconcile (rujuk). The reason is the wife who asked for a divorce through khulu’ to avoid harm on herself. If khulu’ is not considered as talak bain, then the purpose of khulu’ is unfulfilled.

However, Imam Ahmad in one of the narrations said that khulu’ is fasakh that does not decrease the number of talak. (Refer al-Fiqh al-Islami wa Adillatuh 9/7035 and al-Mughni 7/328)

To conclude, khulu’ is talak ba’in sughra that decreases the number of talak. If khulu’ happens for the first time, then the husband’s talak decreases by one, and has the second and third talak. A wife who gets a divorce from her husband through khulu’ is considered as ajnabi (stranger) to her husband. The husband does not have a right to reconcile (rujuk) with his wife just like the case of talak raj’ie except with a new akad and dowry.

Thus, coming back to the question, if a man has divorced his wife twice and reconciled (rujuk) with her both times, of which afterwards they got a divorce through khulu’, then it is prohibited for him to reconcile (rujuk) with his wife. However, the wife must first marry another man before remarrying her ex-first husband.

May Allah SWT always give us goodness and sahih understanding in our daily lives. Wallahua’lam.