AL-KAFI #1582: IS RENTED PROPERTY DONATED FOR PUBLIC USE CONSIDERED AS CHARITY? 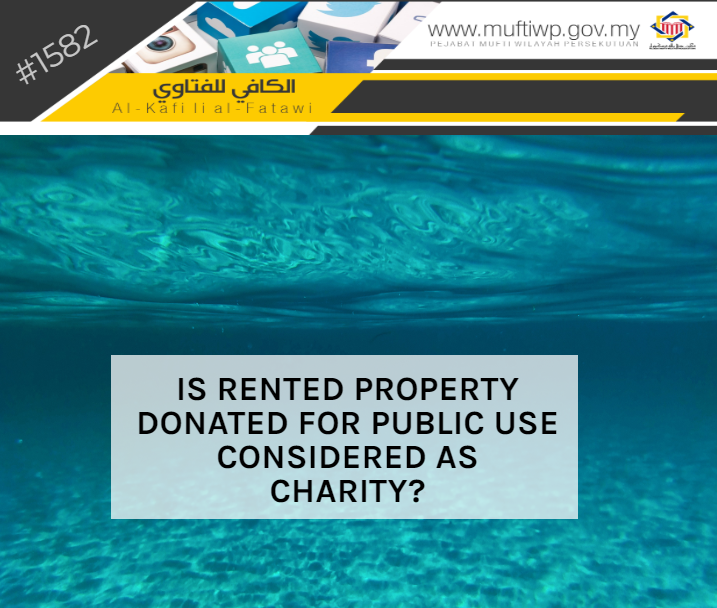 I want to ask what is the ruling of donating water purifier in surau or mosque with the intention of charity but the payment is paid in instalments with the akad of me renting it. Is it considered as charity? Thank you in advance for answering my question.

Islam is a religion that encourages its followers to do good and be charitable. The commandment is clear according to the statement of Allah SWT:

Syeikh al-Maraghi said, you should race to do good and every one of you should have the desire to compete and race to follow the commandment of a leader and not those who dismiss the truth because he is racing towards evil and deviance. (See Tafsir al-Maraghi, 1/288)

Donation or giving to charity is included as an encouraged act of good in Islam. Donation means giving up of one’s rights when a person is still alive with the intention to get closer to Allah SWT. (See al-Majmu’ syarah al-Muhazzab, 15/370 and al-Mausuah al-Fiqhiyyah, 26/323). Ibn Manzur defined donation as a gift for the sake of Allah SWT to the poor and needy. (See Lisan al-Arab, 10/196)

According to the above question, akad for the water purifier is the akad for renting (al-ijarah thumma al-bay’). Such akad basically means the company or supplier would rent a certain property to the buyer for a certain duration for a certain value and after the completion of the period the property belongs to the buyer. (See al-Taqrirat al-Sadidah, Qasm al-Buy’, pg. 145). According to this situation, the ownership rights changed through trade after the end of the renting period as set at a certain price that is paid in instalments. [1]

Contemporary scholars state that akad with the promise of ownership is permissible and that the rent agreement which means that the renter will own the property after the renting period is completed. (See al-Taqrirat al-Sadidah, Qasm al-Buy’, pg. 146). This is in accordance with the prophetic evidence which states:

Answering the above question, it is permissible to donate water purifier bought through the akad of rent in surau or mosques for public use and it is considered as tatowwu’ charity which will be rewarded by Allah SWT. The reason is the aqad for rent means that the renter owns the property for as long as he pays the rent for it. This is as stated by AAOIFI, where the agreement of the change of ownership only binds the owner of the asset, while the renter have a choice to follow it. [2] Thus, the buyer owns the right as long as the buyer follows the agreement and pays the rent as agreed.

To understand this further, here we include several of our previous articles for additional reading materials:

To conclude, we are inclined to state that donating rented water purifier through the akad of rent to mosques or surau for public use is permissible and considered as tatowwu’ charity which is encouraged in Islam. The reason is we consider that at the end of the rent agreement the renter will own the property. Hence, the buyer reserves the right to donate the water purifier for public use as long as he pays the instalments for the property.

Hopefully, this explanation will open our minds in finding opportunities to donate or give to charity seeking the pleasure of Allah SWT. Amin.